Referendum results show Thais are sick of politicians' games and want a cleaner form of democracy.

A poll official counting votes Sunday at the polling station in Rajavinitbangken School in Laksi district unfolds a ballot showing 'Yes' for both the draft charter and the extra question on the appointed senate. (Photo by Pattarapong Chatpattarasill)

The outcome of Sunday's referendum has shown Thai people are fed up with politicians and want to teach them a lesson as results will see the country return to a half-baked version of democracy.

When the new charter is enacted with provisions designed to curb politicians' power, political parties will be weakened and forced to take a back seat, at least over the next five years. Prime Minister Prayut Chan-o-cha is likely to remain in power during this period, according to political observers.

While the unofficial results show the "Yes" camp has outnumbered the "No" camp by a large margin, political observers noted that people voted in favour of the draft constitution for political reasons, rather than the draft's content.

Gen Prayut's decision to play his trump card by announcing he would vote in support of the draft, and the extra question related to the Senate's power to help select a prime minister, had a great psychological impact on the public.

The stance against the draft charter announced by Democrat Party leader Abhisit Vejjajiva and former prime minister Yingluck Shinawatra paled in significance to Gen Prayut's remarks. Even voters in Bangkok, an important support base for Mr Abhisit, voiced their support for the draft.

In Chiang Mai, a Pheu Thai and red-shirt stronghold, the number of "No" votes was slightly higher than the "Yes" votes. Some believe this has indicated a decline in the popularity of politicians when compared to Gen Prayut.

Mr Abhisit wrote on Facebook Sunday evening that he accepted the decision of those who voted in favour of the draft. He also urged all sides recognise the results.

"I accept the decision of the people who voted in favour of the draft charter and extra question, and so should all parties," Mr Abhisit said.

From now on, the National Council for Peace and Order is to press ahead with its "roadmap" towards a general election next year, he said in his Facebook page..

"Our party and I will help solve these problems," he said.

As soon as political parties are allowed to resume political activities, he and his party will expedite efforts to tackle all the problems facing the country, he added.

A Democrat Party source said Mr Abhisit will not be replaced as party leader for making a stance on the draft charter which did not reflect the eventual result.

The source added the stance Mr Abhisit declared was his own, not that of the party. For this reason, there will no pressure on Mr Abhisit.

However, admitted Mr Abhisit failed to influence many party supporters.

Somkiat Onwimon, a media guru and a political scientist, said the outcome of the referendum showed many people still lack interest in politics, and they were too easily persuaded to accept the draft.

He also predicted that political parties will remain in the wilderness for many coming years, and may have to step aside for Gen Prayut to remain as prime minister for five more years.

This is because the appointed 250 senators will work with MPs to open the door for a military prime minister, while political parties will be allowed to have some share in power as in the period when Gen Prem Tinsulanonda was prime minister from 1980 to 1988, which was described as an era of half-baked democracy, Mr Somkiat said.

Meechai Ruchupan, chairman of the Constitution Drafting Commission (CDC), said when the draft charter passes the referendum, all mechanisms will be geared towards the election in 2017.

"When the draft charter passes the referendum, all mechanisms will be directed towards the election," Mr Meechai said, adding that the next step is for the CDC to draw up the new charter's 10 organic laws, a process which will take eight months.

"The prime minister thanked people from all walks life who were eager to go out to vote in the referendum."

"This is a show of force by the people to determine the country's future. No matter what the outcome, the prime minister is ready to accept it. He also asked all sides to accept the public decision," Maj Gen Sansern quoted Gen Prayut as saying.

Gen Prayut had followed the vote counting at home, and stressed that he will stick to his roadmap to restore democracy and hold elections next year.

Meanwhile, red-shirt United Front for Democracy against Dictatorship chairman Jatuporn Prompan said the UDD accepted the result of the referendum but the regime won thanks to unfair rules.

"For those who vote 'No', you did not lose but you are in the war that you have no way to win," he said.

Jade Donavanik, an adviser to the CDC, said the referendum outcome was the direct result of Gen Prayut's last-minute announcement to accept both the draft charter and the extra question.

It was regrettable, he said, that people voted based on political grounds, rather than on the basis of how good or bad the draft charter's contents were.

The plus-side was that people had a clear mandate denouncing corruption and were convinced Gen Prayut was sincere in materialising national reforms. They also wanted to have a general election and to see the country return to normalcy. 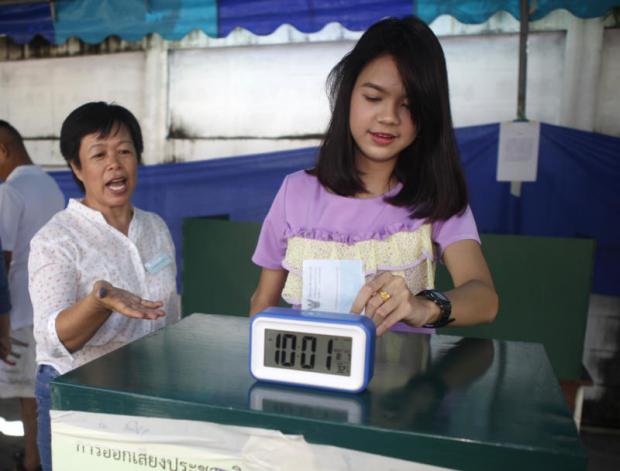 A voter casts a ballot at a polling station in Bangkok's Dusit district.  (Photo by Thanarak Khunton)

There was plenty of criticism.

"Regardless of the outcome, we expect all parties will accept the result, which will help steer our country forward," Election Commission Chairman Supachai Somcharoen said at a media briefing after polls closed.

"This is a grand day for the resurrection of enshrined military power," said Paul Chambers, director of research at the Institute of Southeast Asian Affairs in Chiang Mai. "They are using the very democratic process to increase authoritarianism across the country. It represents the nadir or abyss for Thai democracy."

The charter "speaks to a lot of worries and concerns that a majority of Thai people have," Gothom Areeya, a professor at Thailand's Mahidol University, told the Associated Press.

"Many Thais want to see an end to corruption and the return of peace and development. Even though experts like me may criticise it a lot, our message just didn't reach a lot of the people."

The "yes" vote "adds that touch of legitimacy to the coup makers", said Pavin Chachavalpongpun, an associate professor at the Centre for Southeast Asian Studies of Kyoto University in Japan, and a former Bangkok Post contributor. He is a highly vocal critic of the junta, and under a lese majeste arrest warrant in Thailand.

"It gives them the green light for the next few steps they want to take. They will say the opposition cannot say anything now," Mr Pavin told The Associated Press.

Sombat Thamrongthanyawong, former rector of the National Institute of Development Administration, agreed results showed Gen Prayut was a figure to be reckoned with. His support of the draft charter help shape voters' decision.

The winning yes votes have taught politicians, particularly those in the Pheu Thai and Democrat parties, a lesson. They must recognise more people are now supporting Gen Prayut.

Many voters appeared not care so much about the merits of the draft charter. They only wanted to exclude politicians from the prime minister's seat.

Mr Sombat predicted that five years after the draft charter is promulgated, the Pheu Thai party will not have a chance to lead a government now that the selected Senate is to play a role in picking the premier.

Democrats have greater chance of forming a government given the party's size.

"People don't care about the notion of a half-baked democracy," he said.

No end in sight: Security officials say anti-govt protests will continue next month