A man for the times
Thailand
Politics

A man for the times

The influence of elder statesman Gen Prem refuses to wane, even at 96

Nearly three decades after he left office, the country's 16th prime minister remains as powerful and commands a great deal of clout among the ruling generals and other military top brass. Gen Prem, who led three administrations and five cabinets, stepped down as prime minister in August 1988 after eight years and five months in power.

Days after his political retirement, he was appointed by His Majesty the King as a member of the Privy Council. Ten years later the elder statesman became the council president, and is recognised as working closely with the monarchy and following an important mission to protect the revered institution.

Despite his soft-spoken manner, the nonagenarian is dubbed by the Thai media as the "Killer of the Chao Phraya Basin" for his strong leadership, excellent skills in picking the right men for the right job and eliminating disloyal subordinates and disrespectful foes.

This was seen when Gen Suchinda Kraprayoon and Class 5 graduates of the Chulachomklao Royal Military Academy staged a military coup in 1991.

Gen Suchinda and the other coup makers in the class are known to have sidelined Gen Prem, who they believed was supporting Class 7 graduates to play a leading role in the armed forces.

The coup makers lost their grip on power following Black May in 1992, when a military crackdown against protesters led to many deaths and injuries.

Former prime minister Thaksin Shinawatra, another man seen to have crossed Gen Prem, also ended up being deposed in a military coup and now lives in exile.

The Si Sao Thewes residence is open to well-wishers three times a year -- New Year, Songkran and Gen Prem's birthday. It has become a tradition for prime ministers, defence ministers, and armed forces leaders to go to offer their good wishes and receive Gen Prem's blessings.

The Burapha Payak (Tigers of the East) and Queen's Guard military units, which are known to play an influential role in the armed forces, also have to beat a path to the Si Sao Thewes residence, which has become a symbol of power.

With the burgeoning power of Burapha Payak, which includes Gen Prayut and his deputy Prawit Wongsuwon, speculation has grown as to whether these influential figures are going to back away from Gen Prem.

"I've never had any conflict with Gen Prem. I always give him respect," he told reporters on his 71st birthday on Aug 11.

Thai politics are expected to go through contentious times after the next election, when critics believe there could be an attempt to keep Gen Prayut as prime minister since the constitution opens the door for an outsider to become premier.

This is a crucial time when the Burapha Payak and the Si Sao Thewes residence must stand united to weather possible political turbulence.

Critics say this is one of the reasons why Gen Prayut threw his support behind assistant army chief Gen Chalermchai Sittisart to succeed army chief Thirachai Nakwanich, who is due to retire at the end of September.

His nomination reportedly came as a surprise because Gen Chalermchai does not come from the Burapha Payak clique, a group from which several senior officers have emerged to hold leading roles in the army.

Gen Prayut reportedly told Gen Prawit to pick Gen Chalermchai as the new army chief to ensure some form of power sharing with the Si Sao Thewes residence. This is because Gen Chalermchai is closely connected with Privy Councillor Surayud Chulanont, a figure allied with Gen Prem.

"I trust the prime minister and that all of you can work for the country, with royalty [the monarchy] and make sacrifices," Gen Prem told the well-wishers.

He said he has always told others about how important it was that Gen Prayut and his comrades had to step in during this turbulent time.

"I told 'Tu' [Gen Prayut's nickname] that old soldiers like us will do all we can to help Tu achieve the great mission for the country," said Gen Prem.

At the age of 96, Gen Prem keeps fit by avoiding fried food, eating only steamed or boiled fish. He walks around the residence's garden for half an hour every day, according to his aides.

"I always let things [in my mind] go... I do not want to cling on to anything," he told reporters.

He has composed 174 songs with the lyrics mostly expressing love, and his relationship with the army and country.

"I hope I will live as long as possible and will try to keep fit. Ninety-six is really very old." 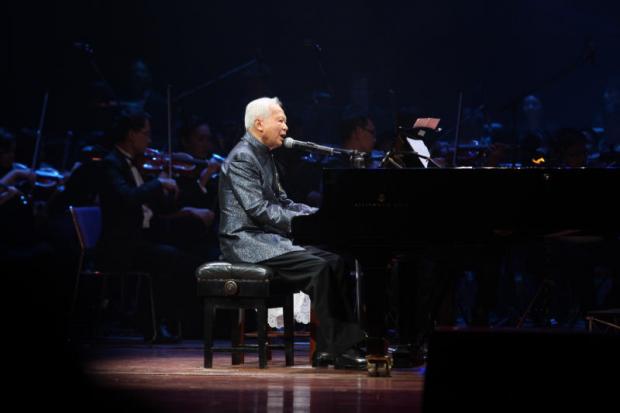 Privy Council president Prem plays to an audience at the Thaialnd Cultural Centre. 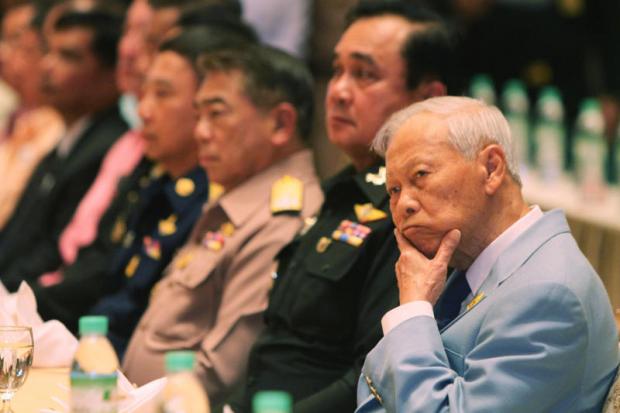