Supinya Klangnarong, a former champion of a free press, has become the spokeswoman for the official broadcast censor, the National Broadcasting and Telecommunications Commission (NBTC), carrying out the military regime's censorship decisions. (Post Today photo)

The broadcasting committee of the National Broadcasting and Telecommunications Commission (NBTC) voted 3-1 on Monday to suspend the Wake Up News programme on the ground its commentators had breached the memorandum of understanding the channel had with the NBTC.

NBTC commissioner Supinya Klangnarong tweeted before the vote a subcommittee had proposed the ban because it felt the programme reported news in a way that sided too much with Jatupat "Pai Daodin" Boonpattararaksa, the student activist arrested for distributing draft constitution Vote-No leaflets who subsequently staged a hunger strike in jail because he believed he had done nothing wrong.

"I personally think the content was not that damaging. The weak point of the programme is that the commentators tend to express their opinions when reading news, making it look partisan but not to the point of disrupting order, national security or good morality," she wrote.

Ms Supinya, who became well known and won awards as an advocate for a free press before she joined the NBTC, said she was the minority at the meeting since she disagreed with the remaining three committee members. The full explanation letter of the channel had also not been submitted and there was confusion on the laws and punishments.

She opposed the decision to ban the programme but acted as the spokesman to explain the decision of the NBTC, appointed earlier this year by the regime as its only official censor of everything on the airwaves.

"This is where we see things differently", she wrote. "Some opinions that the state may not like aren't necessarily illegitimate. The NBTC must use discretion in deciding which content breaches the laws and use this as the criteria."

Sirote Klampaiboon, one of the programme's commentators, wrote on Facebook that a subcommittee invited the programme runners, including him, to explain on Aug 22 on three issues.

The first involved the reading of a Facebook post by Wannasingh Prasertkul about Pai Daodin that might have persuaded people to feel more sympathy with him than he deserved, he wrote.

Mr Sirote was also questioned why he read the headlines of the Bangkok Post and The Nation on Aug 15-17 with the same assumption.

The third issue was about lawmakers' move to allow senators to nominate a non-MP prime minister. The panel questioned Mr Sirote why he needed to read the opinions of Wanchai Sornsiri and Paibul Nititawan, both of whom supported the move. The panel felt doing so created confusion and caused unrest, Mr Sirote wrote.

"All of these are content that had already appeared in other media so we find it strange that we should face this."

He also noted that while Voice TV staff were no stranger to the NBTC -- they have been invited to give explanations at NBTC meetings almost every two weeks -- this was the first time an army officer sat at the head of the table.

"The chairman of the [Aug 22] meeting told us he's the deputy chief of the media working panel of the National Council for Peace and Order," he wrote.

The NBTC earlier banned two of the programme's commentators for 10 days ending Aug 24 for similar reasons as proposed by the channel in exchange of a ban on the programme. 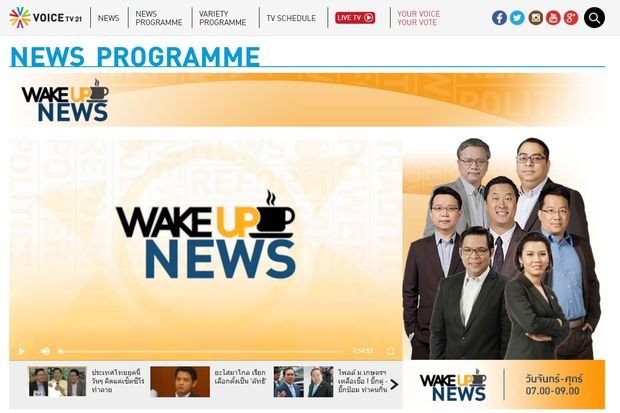 A screenshot of the Wake Up News programme on Voice TV website with its commentators on Aug 29, 2016. The National Broadcasting and Telecommunications Commission voted 3-1 to ban the programme for seven days.