Officials get immunity to empty stockpiles

The regime has given officials immunity from future lawsuits over their handling of stockpiles of pledged tapioca and maize, and compensation demands for losses incurred by the programmes.

The order was invoked by Prime Minister Prayut Chan-o-cha, also chief of the National Council for Peace and Order (NCPO), using Section 44 of the interim constitution. It was announced in Wednesday's Royal Gazette.

Under the order, officials, panels, and agencies assigned from May 22, 2014 to deal with stockpiles of tapioca from the 2008/09 to 2012/13 harvesting seasons, and maize during the 2008/09 season will still proceed with their duties to prevent further losses. 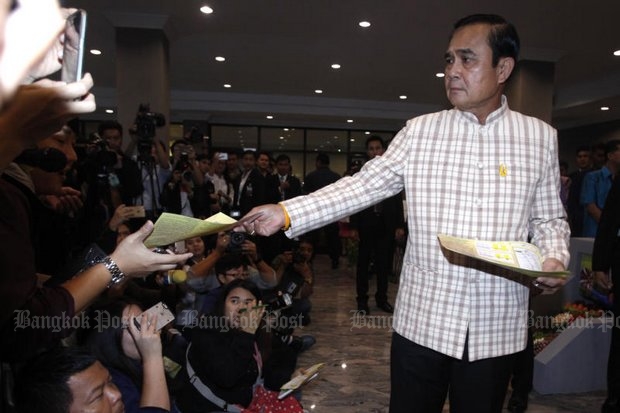 Prime Minister Prayut Chan-o-cha hands out copies of his Section 44 order to media members who asked if the goal was merely to allow immediate seizure of assets of people with political links. (Photo by Thanarak Khunton)

The government fears further deterioration of crops and financial burdens from warehouse, insurance and maintenance expenses. It also wants to stop supplies from being released in the market at an unsuitable time.

The order also covers officials who are working on identifying those responsible for the losses and demanding compensation from them.

According to the order, these officials will be immune from criminal and civil lawsuits as well as disciplinary actions when performing their duties.

After administrative or court orders are issued to demand compensation for losses incurred by tapioca and maize programmes as well as rice pledged from the 2005/06 to 2013/14 harvesting seasons, the Legal Execution Department (LED) will have authority to enforce the orders.

Chairman of the Public Warehouse Organisation (PWO), Kraiboon Suadsong, said the order will help protect officials who are working honestly on stemming losses from the stockpiles which were pledged before May 22, 2014.

Their work is expected to wrap up within two months, Mr Kraiboon said.

The order encourages officials to release the stockpiles more quickly, he said. A total of 340,000 tonnes of tapioca is being kept in the government's stock. The output, worth 77 billion baht, was pledged from the 2008/09 harvesting season.

Mr Kraiboon said 94,000 tonnes of maize was pledged from the 2008-09 harvesting season and almost all of it is in a deteriorated condition. More than 8.4 million tonnes of rice is being kept in government storage. There is a huge financial burden in making use of storage, and the stockpiles should be discharged urgently, he said.

Keerati Rushchano, deputy director-general of the Foreign Trade Department, said authorities are stepping up efforts to discharge tapioca and maize pledged to the government. Losses will be inevitable, he said. The output is now in a deteriorated state and it must be sold rather than kept in storage at huge expense.

A total of 180 criminal cases were pursued in tapioca price intervention programmes, which caused losses of 4.36 billion baht, according to Mr Keerati.

Gen Prayut denounced the notion the order was invoked to immediately seize assets belonging to people liable for losses. He said it was meant to allow the LED to take part in the enforcement of the administrative order.

Last month, a government panel, led by Jirachai Moonthongroy, deputy permanent secretary at the Prime Minister's Office, reported that former prime minister Yingluck Shinawatra will have to be fined 286.6 billion baht in compensation for losses incurred by her government's rice-pledging scheme.

Six former Commerce Ministry officials, including former commerce minister Boonsong Teriyapirom, who are believed to be linked to the allegedly fraudulent government-to-government rice sales, will be asked to pay back a total of 20 billion baht to the state.

Deputy Prime Minister Wissanu Krea-ngam said the seizure of assets based on the administrative orders against Ms Yingluck, Mr Boonsong and others are normally the work of the responsible ministries.

However, the ministries complained they do not have enough officials to execute the tasks and have no idea where the seized assets will be kept, so the order was given to authorise the LED to do this instead of the ministries, Mr Wissanu said.

If the administrative order is issued, those liable for compensation can appeal at the Administrative Court, the deputy premier said. If the court issues an injunction for the asset seizure, the seizure cannot be carried out.

The order will have no implication for the court's ruling, he insisted. The court will deliberate on the cause of the liability and consider whether the required compensation is consistent with the losses incurred during the time when damages took place.

"The [asset] seizure in the rice case hinges on incurred losses and the case has a lot of details to examine," said Mr Wissanu.

According to the deputy premier, those who supervised policies on farm-subsidy programmes would be held accountable because the National Anti-Corruption Commission (NACC) found sufficient grounds for the accusations. Other officials and private entities who are involved will also be dealt with at a later date.

Ex-Democrat Party MP for Phitsanulok Warong Dejkitvikrom, who earlier led a House debate on the rice scheme, insisted the order does not mean the LED would be able to seize assets of the suspects right away.