Teen activist back in Hong Kong after Thailand denies entry

HONG KONG - Thailand stopped Hong Kong teen pro-democracy activist Joshua Wong from entering the country to give a talk and sent him home, raising questions about whether it acted at China's behest.

An activist and a Thai immigration official said Bangkok responded to a request from Beijing, though a Thai government spokesman denied that.

Mr Wong, a 19-year-old activist who rose to global prominence spearheading huge 2014 street protests against Beijing's plan to restrict elections, arrived late Tuesday at Bangkok's main airport. He said he was immediately taken into custody by 20 police and immigration officers and then put on a flight back to Hong Kong about 12 hours later.

He was due to give a talk at Chulalongkorn University about lessons from Hong Kong's "Umbrella Movement'' protests as part of Oct 6 commemorations of a Thai government crackdown on student demonstrators 40 years ago. 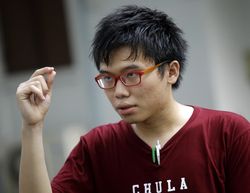 Netiwit Chotipatpaisal, a Thai activist who had planned to greet him at the airport, said police informed him that Mr Wong was detained after Thailand received a notice from the Chinese government.

The deputy commander of Suvarnabhumi airport's immigration office, Pruthipong Prayoonsiri, said at a news conference that Wong was blacklisted after China asked the Thai government to deny him entry, according to a report in Thai media. The report was confirmed by an officer at the airport department who spoke on condition of anonymity because he was not authorised to speak to the media.

Mr Wong, who turns 20 next week, was one of the high-profile student leaders behind pro-democracy protests two years ago that marked the former British colony's most turbulent period since China took control in 1997. In August, a Hong Kong court sentenced him to community service for his role in the protests, which brought parts of the city to a standstill for months.

Mr Wong told reporters that he was held in a windowless holding cell at the Bangkok airport. He said he was not given a clear explanation for his detention and was not allowed to contact his family or a lawyer.

"I actually had a lot of discussion with a Thai official, but because he didn't speak English very well, I couldn't hear him very well. But there was one word I heard very clearly: blacklist,'' he told reporters after arriving back in Hong Kong.

"I never imagined any place other than China would lock me up,” the South China Morning Post quoted him as saying. (continued below) 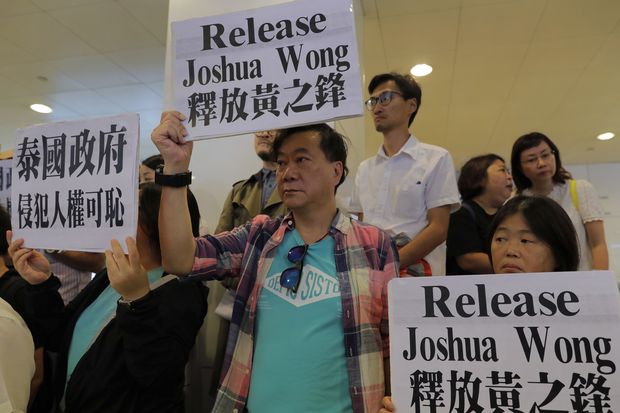 "If I hadn't returned to Hong Kong, I can't imagine what kind of situation I'd be in,'' Mr Wong said. "Fortunately, I did not become another missing person.''

The bookseller case and other incidents have intensified fears in Hong Kong that Beijing is overstepping its boundaries and undermining a "one-country, two systems'' formula that governs the territory's relationship with the mainland.

If it's true Beijing leaned on Thailand, "it will seriously damage the reputation of the Chinese government and it will show a very bad example of how the Chinese government deals with human rights defenders in Hong Kong,'' said Nathan Law, who co-founded the political party Demosisto with Wong earlier this year.

Mr Law, 23, was elected Hong Kong's youngest legislator last month. Their party wants a referendum on "self-determination'' on the future status of Hong Kong, which is in the middle of a 50-year transition period to Chinese rule. (continued below) 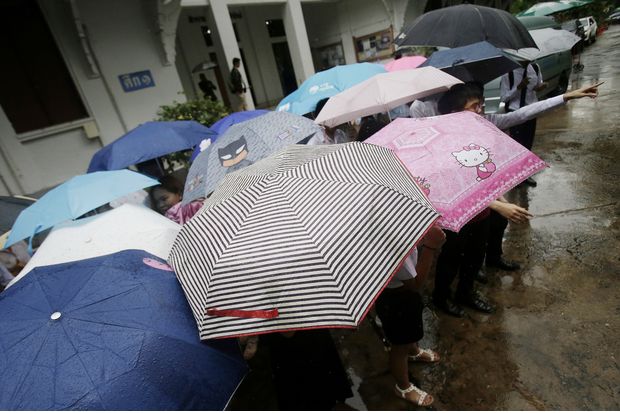 Amnesty International said the decision to block Wong, who inspired student activists in Thailand, "underscores the government's willingness to suppress the right to freedom of expression and raises serious concerns about how China is using its influence over Thai authorities".

China's Foreign Ministry said in a brief statement that it was aware of reports of Mr Wong's detention, but did not say whether China had asked Thailand to detain him -- only that it respected Thailand's ability to manage the entrance of people into the country "in accordance with law".

"Thailand's arrest of Joshua Wong, a well-known pro-democracy activist in Hong Kong, sadly suggests that Bangkok is willing to do Beijing's bidding. Wong should be freed immediately and allowed to travel and exercise his right to free expression,'' said Sophie Richardson, China director at Human Rights Watch.

Refusing entry to Wong would also be in line with recent moves by Thailand's military rulers, who seized power in a 2014 coup.

The government has shown zero tolerance for dissent and has cracked down hard on its own student activists who have protested the military rule. It has detained students and stopped speeches from taking place. Last month, Thai authorities threatened to arrest Amnesty International speakers who planned to hold a news conference to release a report detailing allegations of torture at the hands of the military and police, causing the rights group to cancel the event.

Mr Wong was also turned back in May 2015 when trying to enter Malaysia to speak at seminars in four cities. Malaysian officials said Wong was banned from entering the country but did not explain why.