Activists hold lighted candles at Thammasat University before dawn on Thursday, as they gathered to mark the 40th anniversary of the Oct 6, 1979 killings. (AP photo)

Buddhist monks opened an emotionally charged commemoration at dawn on Thursday, the 40th anniversary of a massacre of student protesters at Thammasat University, as survivors reflected on a battle for democracy that appears lost in junta-run Thailand.

The killings of Oct 6, 1976 marked a nadir in the kingdom's blood-splattered recent history.

At least 46 student students were shot, beaten to death or hanged from trees after they massed at Thammasat University in protest at the return from forced exile of hated military dictator Field Marshal Thanom Kittikachorn. (continues below) 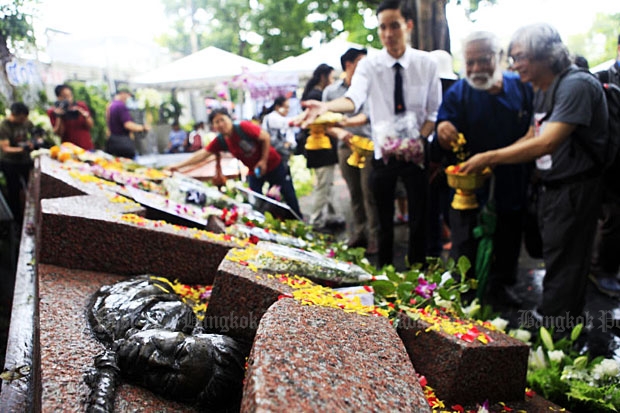 Activists place flowers at the Sclupture Garden at Thammasat University, after a candle-light ceremony. (Photo by Apichart Jinakul)

Survivors say the true death toll was at least twice as high, with thousands more arrested or forced into hiding.

Fearing a leftist rebellion in a region where many countries had become communist, security forces - flanked by royalist armed militias - ruthlessly cracked down on the students.

No state apology has ever been issued and no officials have been held to account for the deaths -  a reflection, critics say, of a culture of impunity for the military that endures to this day.

At dawn on Thursday survivors gathered under heavy drizzle around a permanent memorial at the university's entrance, where the assault began.

Some held candles, others wore T-shirts with the slogan "I think therefore I am dead" featuring a hanged man - a reference to the lynching of students who were strung from trees near the campus. (continues below) 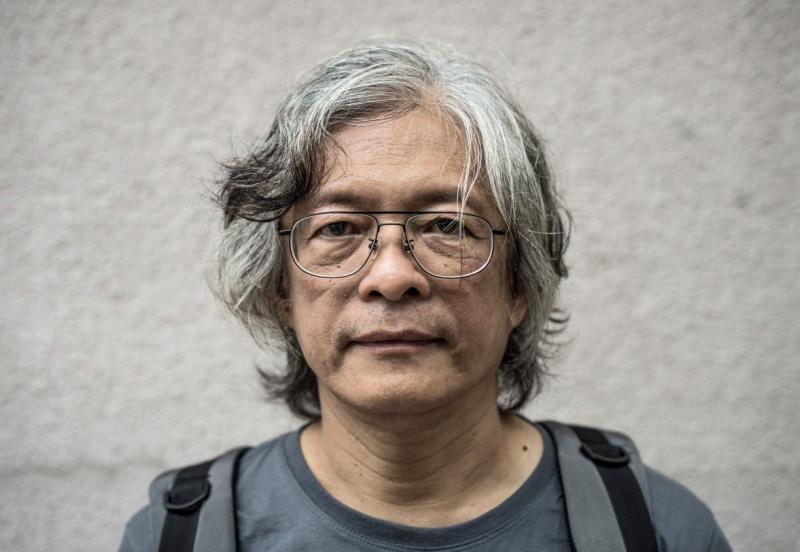 Sinsawat Yodbangtoey, a survivor of the Oct 6, 1976 massacre, poses for a portrait during the commemoration of the 40th anniversary. (AFP photo)

"There were many killed and injured on that day," said Sinsawat Yodbangtoey, 63, who was an art student at a nearby college when he joined the Thammasat protests.

"Even though I wasn't injured... my heart is wounded."

The Oct 6 crackdown ended a brief three-year flirtation with democracy and ushered in another 16 years of military-led rule.

Thailand is once again under military rule, with the kingdom's democracy movement hemmed in by repressive laws.

The last coup in 2014 - the army's 12 successful power grab since 1932 - came four years after soldiers once more opened fire on pro-democracy protesters on Bangkok's streets during the red-shirt protests of 2010 againt the Abhisit government.

Many newspapers nonetheless used the rare space provided by Thursday's anniversary to recall dark chapters from the military's past, while graphic photos of student hangings were widely shared on Thai social media. (continues below) 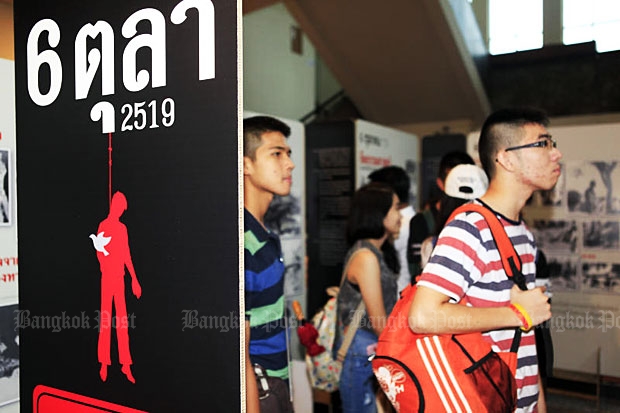 Participants look at the Oct 6, 1976 exhibition at Thammasat Univesity. (Photo by Apichart Jinakul)

Sirawith Seritiwat, a 24-year-old Thammasat student and one of a handful of activists protesting against the current junta, said remembering the past is vital in a country with a proclivity for collective amnesia over difficult events.

"There was an effort by many people, (Thai) governments and leaders, to forget history," he told AFP.

"They want reality to be hidden."

Former politician and student leader Prommin Lertsuridej, 62, who fled to the jungle for four years to avoid arrest after the protest, said October 6 was a "hugely important" moment in modern Thai history.

"We gather every year to show we were not the people who destroy the country -- we are the ones who want to create a fair society," he added.