Regime pushes ahead with rice scheme

The National Rice Policy Committee on Monday approved a subsidy programme for rice farmers following a fall in rice prices while Prime Minister Prayut Chan-o-cha accused some politicians of colluding with rice millers in pushing prices down.

The measures, including a pledging-like scheme, for growers of Hom Mali rice, are aimed at encouraging farmers to delay selling of paddy while prices are low. Business is brisk at this Rangsit market rice kiosk, but farmers are crying foul over the slump in prices, and the prime minister sees a conspiracy by politicians. (Photo by Tanaphon Ongarttrakul)

Commerce Minister Apiradi Tantraporn said after the committee meeting that farmers who participate in the programme would receive 11,525 baht per tonne of Hom Mali paddy in total.

The scheme is specifically for Hom Mali fragrant paddy with 15% moisture content. Measures will be proposed for the cabinet's approval today, she said. 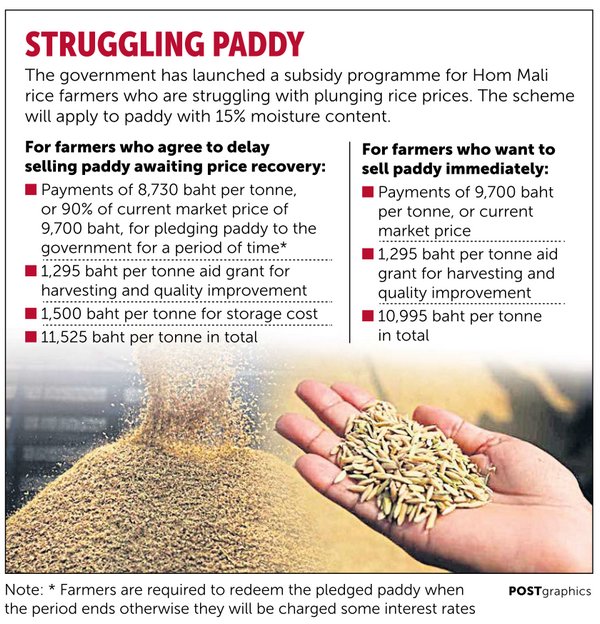 According to the committee, of the 11,525-baht subsidy, 8,730 baht will be paid to farmers for storing their paddy in barns for a certain period of time.

At the end of the designated period, when market prices are expected to have increased, the farmers are required to redeem the paddy.

If not, they will be charged interest rates which will be based on the Minimum Retail Rate or Minimum Lending Rate, Ms Apiradi said.

The rest of the subsidy will cover harvesting, quality improvements as well as storage costs. The aid is capped at 10 rai of paddy per household, the commerce minister said.

The financial assistance is being facilitated by the Bank for Agriculture and Agricultural Co-operatives (BAAC).

Ms Apiradi also said the total production of Hom Mali this year was 10 million tonnes, higher than the previous projection of up to 9 million tonnes.

She said 90% of the production will be harvested this month and the rest next month.

Speaking ahead of the rice board meeting, Gen Prayut said the falling rice prices, especially for Hom Mali rice, can be attributed to two factors: incomplete restructuring of the agriculture sector and political activities.

He said the restructuring of the agriculture sector is still ongoing and will take time. The problem is complicated by collusion between politicians and rice millers in driving the rice prices down to create pressure against the government.

He said he had instructed the rice board to come up with relief measures that could be implemented without delay but would not cause further problems.

"I've told them to reach a conclusion that can be implemented right away, otherwise [the matter] will be distorted so much that other areas of work will also be affected," he said.

Speaking during his visit to Sanam Luang on Monday, Gen Prayut promised the government would try to maintain rice prices at 10,000 baht per kwian (approximately one tonne).

"The production cost is about 4,000 baht per kwian, so the government is making efforts to shore up the price to 10,000 baht. We are working on it," he said.

The prime minister insisted it is not possible to hand out cash to the farmers like during previous governments and urged farmers to consider growing substitute crops.

Col Sirichan Ngathong, deputy spokesperson of the National Council for Peace and Order (NCPO), said the regime has detected there might be attempts to intervene in rice market mechanisms for political purposes.

She said the NCPO's peace-keeping task-force is looking into the matter by talking to rice farmers and monitoring paddy rice purchases by rice millers in a bid to compile information for submission to the government.

Pheu Thai's Pichai Naripthaphan, a former energy minister, voiced agreement Monday with the scheme to help farmers, but said it was similar to the Yingluck administration's rice programme.