The junta's theory: Farmers grow and harvest the rice, then take it to the mills, where operators pay the farmers a pittance, prepare and bag the rice, and raise prices to get maximum profits. (File photos)

The regime has deployed soldiers to "seek cooperation" from all rice mills nationwide to buy grain from farmers at "reasonable" prices in an effort to shore up rice prices.

The move was not aimed at threatening millers but seeking their cooperation not to drive down prices, said Col Sirichan Ngathong, deputy spokesman of the National Council for Peace and Order (NCPO).

They will meet all mill operators across the country, Col Sirichan said, adding the officers should have some knowledge about rice affairs and be stationed in areas where they can ask to meet local millers.

Soldiers will gather information about the defects in the rice pricing mechanism which may have led to the recent fall in prices, and listen to concerns raised by millers, she said.

Armed forces will buy grain from farmers through growers' cooperatives to feed 100,000 military personnel as well as resell grain, she said.

The purchase price is initially set at 13,000 baht per tonne, in line with the government's recently introduced subsidy programme.

Thai Rice Millers Association president Manas Kitprasert Wednesday insisted rice millers have not played a role in driving down rice prices or worked with anyone to do so, despite claims to the contrary.

Millers bought grain in line with the market mechanism and the prices were based on those quoted by exporters.

He said the association and representatives from millers across the country will go before the media today to clarify the matter.

The cabinet on Tuesday approved the rice subsidy scheme at 13,000 baht per tonne for Hom Mali paddy to help farmers in the North and the Northeast suffering from tumbling rice prices.

Of the 13,000 baht, 9,500 baht will be paid to farmers to store their paddy for a certain period of time, while the rest of the subsidy covers other costs, including quality maintenance and storage.

The programme took effect on Tuesday and it runs until Feb 28 next year.

The head of the Thai Agriculturist Association, Wichien Puanglamjeak, thanked the government for rolling out the programme, which he said should make farmers happy.

He also called on the government to help Central Plains farmers who grow other kinds of rice besides Hom Mali rice, and who are suffering from the falling prices.

They drove down the prices of unmilled rice so as to hoard it, believing the government would have to launch a new rice-pledging programme, which would later buy their rice.

Suthikorn Kingkaew, a lecturer at Thammasat University's Department of International Business, Logistics and Transport, said the recent fall in rice prices was in line with an estimate predicting a huge supply around the world this year.

This was also coupled with the government's massive rice stockpile, which led rice millers and traders to believe rice prices would fall in the future, he said.

Accordingly, they drove down the prices to ward off possible losses.

He said the government should reveal its stock and the rice output likely to enter the market, so millers can gauge suitable prices.

๋Jitti Mongkolnchaiarunya, dean of Thammasat's Puey Ungphakorn School of Development Studies, launched a programme Wednesday to draw buyers to buy rice directly from farmers, after some farmers started selling directly via the internet.

It will offer space at the university for direct rice sales, lay out a rice pre-order system and register farmer networks so buyers can contact them directly online.

Agriculture and Cooperatives Minister Chatchai Sarikulya said the ministry will buy paddy from farmers via agricultural cooperatives and mill it for distribution to customers through 24 distribution centres and their 120 sub-centres.

Meanwhile, the Office of the Vocational Education Commission has told its agencies to offer farmers assistance, including milling rice free of charge, drawing up designs for rice packaging and sharing knowledge on marketing.

The Department of Labour Protection and Welfare has also vowed to contact provincial commercial offices to sell rice at business operation facilities.

Below: Rice is put on sale at a makeshift tent at Thammasat University's Puey Ungphakorn School of Development Studies, which opened a space for farmers to sell rice directly to customers Wednesday. The activity at the Rangsit campus was intended to help farmers suffering from tumbling rice prices. (Photo by Tanaphon Ongarttrakul) 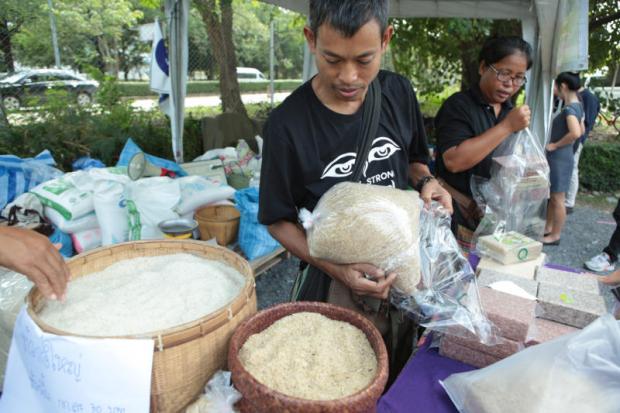