Act would 'restrict freedom of expression'

The National Legislative Assembly is scheduled to pass the new Computer Crime Act after token debate Friday, despite opposition from the public, civil society and the business community.

Human rights advocates, lawyers and netizens have voiced opposition to a bill to amend the 2007 Computer Crime Act, saying some provisions are vague, too sweeping in scope, and restrict people's freedom of expression.

The National Legislative Assembly (NLA) has postponed deliberation of the bill in its third and final reading, originally scheduled for Thursday, to Friday.

One of the most controversial issues surrounding the bill is that a five-member committee will be set up to screen computer information even if it does not violate any law but is considered a breach of "public morals". The panel can recommend authorities ask for a court order to remove or block the content.

Kanathip Thongraweewong, dean of the law faculty at Saint John's University in Bangkok, also pointed to Paragraph 2 of Section 14 which zeroes in on those who enter false information into a computer system deemed to damage national security, public safety, economic security, public services and infrastructure, or cause panic among the public.

Mr Kanathip said this section is "too broad in scope" and, although it no longer covers defamation, it still duplicates other laws covering fraud and other criminal acts. 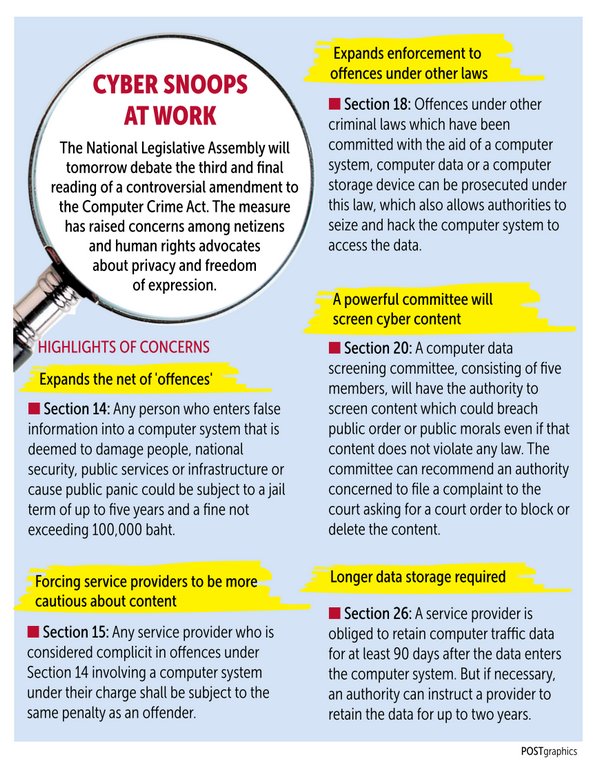 Mr Kanathip said the term "public services" in this section is vague. He doubted whether opinions posted on the internet could cause disruption to public services, such as a power blackout, and if this could be deemed as a threat to national security.

"This clause is too sweeping and could be used to censor opinions. The government could cite this law to sue people who voiced their views," he said.

Mr Kanathip spoke out against Section 20 of the bill aimed at setting up a five-member computer data screening committee.

This section gives the committee power to make judgements, instead of specifying what is forbidden, he said. Mr Kanathip noted that the term "public morals" in the bill will depend on interpretations by the committee.

"This committee will be very powerful," he said.

The Thai Netizen Network has launched an online campaign on www.change.org against the bill, with more than 150,000 people signing an online petition asking the NLA to reconsider the bill.

Arthit Suriyawongkul, coordinator of the network, said he will submit the signatures of the bill's opponents to the NLA, and hoped the assembly will review the bill.

Other critics such as iLaw, Thailand Internet Firewall and Thailand F5 Cyber Army Against a Single Gateway, have also launched online campaigns against the bill.

However, Pol Gen Chatchawal Suksomjit, who chairs an NLA committee responsible for drafting the amendment bill, insisted that proposed amendments are intended to improve the law and provide clearer details. Section 14 of the bill removes libel offences and focuses only on acts of fraud and fabrication.

He also defended the planned data screening committee, saying a court order will be needed if a website is to be blocked.

Paiboon Amonpinyokeat, a legal expert and adviser to the NLA committee, said Section 14 of the bill will help cut computer-related defamation cases by nearly 50%. This will ease the courts' burden and speed up trials of computer crime cases.

He also said the bill prevents officials from disclosing or giving computer information, computer traffic data, or any information from internet users to others. Officials who violate this section will face a jail term of up to three years or a fine of no more than 60,000 baht or both.

Government spokesman Sansern Kaewkamnerd on Wednesday denied claims that the bill to amend the Computer Crime Act is linked to the single internet gateway proposal.

"This is not true. The government has never had an idea for a single gateway whatsoever," Lt Gen Sansern said.

He added that the bill is aimed at modernising computer crime law to suit changing technologies. In essence, the bill will impose broader penalties to deal with cyber threats that affect national security, sending spam, or spreading doctored images and content.

Gen Prawit was responding to renewed opposition to the single gateway, with the National Legislative Assembly ahead of the third reading of the bill to amend the Computer Crime Act.

Gen Prawit said that "for the sake of our defence" a single gateway was necessary, because ill-intentioned people with just a mobile phone could send damaging information to other countries.