The National Legislative Assembly passed in three straight readings Thursday a bill to amend the 1992 Sangha Act in what is seen as a move likely to diminish the chances of Somdet Phra Maha Ratchamangalacharn becoming supreme patriarch.

The amendment, which restores an old tradition in which the King reserves the right to name the supreme patriarch, means that seven other senior monks on the Sangha Supreme Council (SSC) now have a shot. 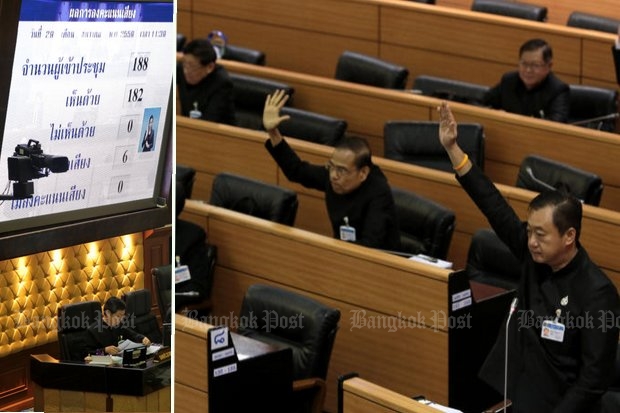 NEVER IN DOUBT: Members of the junta's National Legislative Assembly voted 182-0 with six abstentions to do what the military government asked. (Photos by Chanat Katanyu)

The quick passage of the bill has also come as a shock to supporters of Somdet Chuang, the abbot of Wat Paknam Phasi Charoen who was in January nominated by the SSC to be the new supreme patriarch. He is the most senior monk in the SSC.

The amendment bill was proposed on Tuesday amid opposition from supporters of Somdet Chuang.

The assembly spent only 58 minutes scrutinising the draft which sailed through with 182 votes in favour and six abstentions.

The amendment, which targets Section 7 of the Sangha Act, will take effect after being published in the Royal Gazette.

Section 7 has been amended to say the King appoints a supreme patriarch while the prime minister countersigns the appointment.

Previously it said the King appoints a successor to the supreme patriarch after his predecessor has left office or is unable to perform his duties and that the prime minister, "with the SSC's consent", nominates the candidate to be royally appointed as the new supreme patriarch.

By the old law, the monk who can be nominated must be the most senior monk with the title somdet phra rajagana, or somdet for short.

The amended law takes this condition out and leaves it to the royal prerogative.

Prime Minister's Office Minister Ormsin Chivapruck observed the NLA's deliberation of the amendment bill. The NLA proceeded after being told the cabinet had no objections.

A source close to the NLA said the amendment will remove conditions that make Somdet Chuang the sole candidate for the supreme patriarch seat.

All eight senior somdets, including Somdet Chuang, are now eligible.

Previously, Prime Minister Prayut Chan-o-cha could submit only the nomination of Somdet Chuang for royal endorsement, according to the source.

Gen Prayut has put on hold the forwarding of the nomination because the senior monk faces criminal charges in connection with car tax evasion.

Phra Methithammajarn, secretary-general of the Buddhism Protection Centre of Thailand, cried foul Thursday over the quick passage of the amendment, saying the move was unusual.

He said the NLA's meeting was supposed to brief the government's representative, not cast a vote.

"Our group will discuss the next move but we have to tread carefully. The situation is volatile," he said.

The monk said it is possible the amendment is intended to block Somdet Chuang from assuming the supreme patriarch's post and warned the NLA to take responsibility for any complications that might follow.

But NLA member Somchai Sawaengkarn said the amendment is not intended to block anyone as claimed by critics and instead it will eliminate the seniority rule.

However, he said it does not mean Somdet Chuang, as the most senior monk, will miss out on the post.

NLA vice-president Surachai Liangboonlertchai said Thursday there was no hidden agenda involved in the assembly's three straight readings of the bill.

Sulak Sivaraksa, a Buddhist scholar, backed the amendment, saying it is likely to break the impasse over the nomination of the supreme patriarch.

In his Facebook message, Mr Sulak said Somdet Chuang is embroiled in a car tax evasion scandal so the government is reluctant to submit his nomination for royal endorsement.

Without the amendment, the issue will remain murky.

He also criticised the monks who lambasted the government for intervening in monastic affairs, saying they were wrong to say so because monks are not excluded from the secular world.

"There are certain activities where state authorities are responsible. The prime minister, for example, has to countersign the appointment of senior monks," he said.