The economy is gaining traction. From meagre 0.7% growth in 2014, when the country was in a political mess, expansion is expected to have reached 3% or even a bit higher in 2016. The pace of recovery, however, is still uneven.

The Thai economy looks poised for modest growth in 2017 as domestic strengths are expected to cushion larger downside risks from external headwinds, the central bank and economists say.

The Bank of Thailand's Monetary Policy Committee (MPC) has maintained its economic growth forecasts of 3.2% for 2016 and 2017, noting that downside risks to the Thai economy largely come from external factors.

External risks include potentially weaker-than-expected growth of Thailand's trade counterparts -- China in particular -- uncertainties over the soon-to-be US president's protectionist campaign promises and the recovery pace of Chinese tourist arrivals. 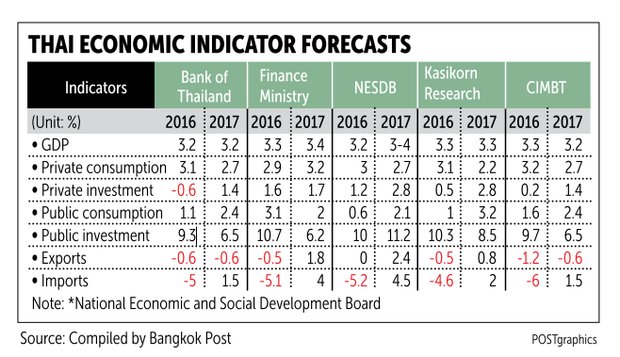 The coming general elections in a number of European countries, which could shift their policy directions and wild swings in the financial markets resulting from the divergence of monetary polices for advanced economies, will contribute to greater downside risks in 2017.

The Bank of Thailand has estimated that the government's harsh measures to curb illegal tour operators will knock off 1.2 million and 2.2 million foreign tourist arrivals, most of them Chinese, to Thailand in 2016 and 2017, respectively.

The tourism sector, accounting for 10% of the country's GDP, has played an important role in driving Thai economic growth over the past several years in light of anaemic exports, private investment and domestic consumption.

Bank of Thailand governor Veerathai Santiprabhob has been sanguine that Thai economic growth will continue in 2017, although that growth will be trammelled as some sectors, including farming, continue to struggle.

The possibility of protectionist US trade policies being imposed on China by President-elect Donald Trump has fanned fears among economists that it could lower the Chinese export value to the US and, in turn, put pressure on Thailand's shipments of raw materials to China for re-export.

"Even though the US has no plans to directly impose trade protection measures on Thailand, its stance towards China could lower Thailand's and other Asean members' exports of raw materials to China in 2017," says Amornthep Chawla, head of research at CIMB Thai Bank.

Whether the protectionist US trade measures will be implemented remains uncertain and this will compel importers to reduce their merchandise orders from Thailand in the first half of 2017, he says.

"While risks of a drop in Thai merchandise exports in both 2016 and 2017 still loom, that contraction will be smaller than Thailand's exports to the fast-growing CLMV (Cambodia, Laos, Myanmar Vietnam) countries, which will provide a buffer," Mr Amornthep says.

Thailand's outbound shipments have shrunk since 2013 and its picture in 2016 remained fragile, moving back and forth between growth and contraction territory.

Exports bounced back strongly in November to 10.2% growth after falling 4.2% year-on-year in October and against growth of 3.4% and 6.5% in September and August, respectively, according to the Commerce Ministry. For the first 11 months of 2016, exports totalled $197 billion (7.05 trillion baht), down marginally by 0.05% year-on-year, with imports shrinking 5.1% to $177 billion. The trade surplus for the period totalled $19.7 billion.

With November's surprise growth in exports, the Commerce Ministry is more upbeat that exports for 2016 will stay in positive territory or in a range of -0.1% to +0.2%.

"We're also worried about private investment, which has been tepid over the past three years, as poor confidence both domestically and globally could have made it fall further in the fourth quarter of 2016 and also in 2017," Mr Amornthep says.

He says prolonged low private investment has caused structural issues in the manufacturing sector such as excessive production capacity, lack of labour development and low innovation, which could weaken the country's competitiveness in the long term.

As external risks loom large in 2017, CIMBT's research house has revised down its forecast for Thailand's economic growth by 0.3 percentage points to 3.2% in 2017, marginally below 3.3% forecast for 2016.

Southeast Asia's second-largest economy surprisingly expanded at an annual rate of 3.2% in the first quarter and 3.5% in the second quarter before slowing down to 3.2% in the third quarter. Economists and policymakers voiced some concerns about the economic growth in the final quarter of 2016 due to sagging domestic consumption and the impacts from the government's crackdown on illegal tour operators.

Mr Amornthep was pessimistic that exports of Thai goods would shrink by 1.2% in 2016 and 0.6% in 2017, marking a fifth-straight year of export contraction if the forecast holds.

"We expected the Thai economic recovery in 2017 would be more broad-based, instead of relying largely on government spending, like in 2016," says Sarun Sunansathaporn, an economist at the Bank of Ayudhya (BAY) research department.

On the domestic front, private consumption, for which growth was strong in 2016 due mainly to a flurry of short-term government stimulus measures, is expected to improve in 2017 as farm income is gaining momentum.

Mr Sarun says an increase in the minimum wage, improvements in farm income, the end of instalment repayment of car buyers under the first car scheme, a new personal income tax structure and improvements in household debt will be positive factors supporting private consumption in 2017.

Public spending and investment are also expected to remain solid in 2017, especially from the government's big-ticket infrastructure projects, he says.

The Finance Ministry recently estimated that 220 billion baht set for infrastructure development will be pumped into the economy in 2017. The ministry has also instructed state enterprises to front-load investment spending earmarked over the next two years in 2017 to boost the country's economic growth amid lacklustre private investment.

Mr Saran says private investment, which has been stubbornly tepid since the country's devastating floods in 2011, is expected to gain some speed in 2017 on the back of the global demand rebound and the government's infrastructure investments.

"Public spending will remain the mainstay of economic growth. But the government is also conservative, as evidenced by the fact that it plans to inject an additional 190 billion baht [from the mid-year budget] into the economy in 2017," Mr Saran says.

The government set up a mid-year budget worth 190 billion baht, the bulk of which will be splashed into 18 provincial clusters in an effort to improve their competitiveness and also support the country's economic growth.