Political parties and pressure groups will be asked to sign "a memorandum of understanding on national reconciliation" as part of government efforts to heal the political divide, Deputy Prime Minister Prawit Wongsuwon says.

However, Gen Prawit, who has been put in charge of the reconciliation process, insisted that the move has nothing to do with an amnesty for political offenders.

"It will not violate the constitution and has nothing to do with an amnesty. It's about making a pact, which is not against the law, and I'm not the one who will lay down the rules. The agreement must be acceptable to all sides," Gen Prawit said.

He said that representatives from all political parties and groups will be invited to contribute ideas, including academics, legal experts, senior military soldiers, and police officers.

Gen Prawit said the government will listen to them, gather their feedback, and establish a set of guidelines that will promote unity. Political parties can ask for revisions, he said.

Asked if political parties and groups will also be asked to sign a pact forbidding them from leading people in street protests, Gen Prawit said that the law on public gatherings is now in force and those seeking to hold public demonstrations must seek permission and comply with the law.

When asked if the military will play any role in the reconciliation process because the military was viewed as a party in the political conflict, Gen Prawit said: "The military never has enemies. It has no conflict with anyone." 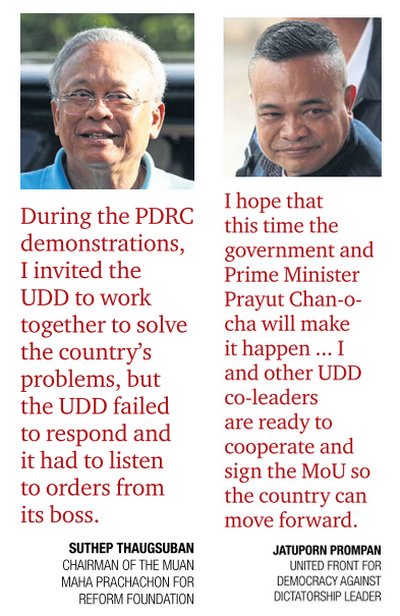 Gen Prawit has been assigned by Prime Minister Prayut Chan-o-cha to lead a committee to achieve national reconciliation -- one of four committees set up to push forward national reform, national strategy and reconciliation. Each committee will be headed by a deputy prime minister.

Prime Minister's Office Minister Suvit Maesincee said Monday that the names of the members of the four committees are expected to be known this week, comprising experts from various fields.

Mr Suvit said he will today meet Gen Prawit to discuss the structure of the committee to foster national unity and to discuss the possibility of combining unity measures and reforms.

Democrat Party leader Abhisit Vejjajiva told the Bangkok Post there was a need to determine the truth behind political unrest first.

"The Democrat Party's stance remains unchanged. The truth must be determined and it must be found out who broke the law and how," he said.

"Society wants issues relating to unity to be clarified before elections.

"Society is concerned that if the election takes place before the reconciliation issue becomes clear, unrest and conflict may erupt again," Mr Abhisit added.

Suthep Thaugsuban, who is now chairman of the Muan Maha Prachachon for Reform Foundation, voiced support for the government's unity bid, but warned achieving unity is not an easy task.

"I support the move by Gen Prayut if it benefits the country and the public. But achieving unity is not easy. We must first find out who will reconcile with who, and how," said Mr Suthep, who is a former Democrat secretary-general and former leader of the People's Democratic Reform Committee (PDRC) which led street demonstrations against the Yingluck Shinawatra government prior to the May 22 coup in 2014.

"If I am asked to reconcile with the UDD [United Front for Democracy against Dictatorship], I wonder on what issues we will reconcile. During the PDRC demonstrations, I invited the UDD to work together to solve the country's problems, but the UDD failed to respond and it had to listen to orders from its boss," Mr Suthep said.

He also disagreed with any proposals to whitewash offenders who committed serious crimes, and particularly cases relating to Section 112 of the Criminal Code or the lese majeste law, and the burning of buildings.

Khunying Sudarat Keyuraphan, a key Pheu Thai Party figure, welcomed the government's reconciliation move, but said success in fostering unity rests on the sincerity of those in power.

"Those in power must show sincerity and maintain impartiality, and must avoid getting themselves involved in conflict themselves.

"They must listen to all sides equally, rather than invited parties involved in conflict only as a token gesture as before," Khunying Sudarat said.

She added that a reconciliation process must be in line with the international rule of law without discrimination against any particular groups.

UDD leader Jatuporn Prompan said the UDD co-leaders are ready to cooperate with the government's reconciliation move and sign the MoU.

"Earlier, efforts were made to create unity, but they all failed because no one could make unity happen.

"I hope that this time the government and Prime Minister Prayut Chan-o-cha will make it happen."

"I and other UDD co-leaders are ready to cooperate and sign the MoU so the country can move forward," Mr Jatuporn said, adding that the UDD will also present its proposals on national unity to Gen Prawit.

Also Monday, Deputy Prime Minister Wissanu Krea-ngam said the special panel set up to amend the constitution endorsed in a referendum last August will meet for the first time today.

The amendment process is expected to take less than 15 days, Mr Wissanu said.