Friends of Jatupat "Pai Dao Din" Boonpattararaksa protest against his denial of bail in front of the court in Khon Kaen on Friday. (Photo by Jakkrapan Nathanri)

KHON KAEN: Jatupat Boonpattararaksa denied all wrongdoing before judges after state prosecutors indicted the student activist in court on serious charges on Friday.

Mr Jatupat, better known as "Pai Dao Din", was taken from the provincial prison to the Khon Kaen court to be formally informed of charges of lese majeste and violation of the Computer Crime Act behind doors closed to outsiders. His mother Prim and lawyers were allowed to attend.

After hearing the charges read by a judge, Mr Jatupat denied all of them and decided to fight the case in court. The hearing took only five minutes and the session was then adjourned. He was again denied bail.

The court set March 21 for the pretrial examination of evidence and witness lists.

"Pai" faces the charges after he shared a BBC Thai article on the life of His Majesty the King on his Facebook posts on Dec 2, with an added comment. The student activist was arrested the next day. 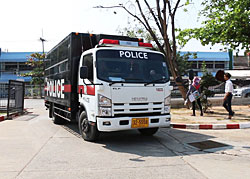 He was released on bail on Dec 4, but it was later revoked and he was remanded in custody to Khon Kaen prison on Dec 22. All subsequent requests for bail have been rejected, and his detention extended.

On Friday, prosecutors opposed to bail, asserting the suspect could go into hiding or flee because the case  involves the royal institution.

The court remanded him in custody and ordered him returned to the provincial central prison.

Yet, one of his lawyers, Krissadang Nuttajaras, still hoped for his temporary release by the court to allow "Pai" to prepare for the court battle next month.

"His defence team and family will make another bail request, as it is the right of the suspect to do so," he said. "Pai" had shown no intention to flee since his second detention, the lawyer added.

Outside the court, friends of the Dao Din group based at Khon Kaen University, along with students from other colleges and supporters, rallied for his release amid a tight security net imposed by authorities.

They held up placards with the message "Free Pai" and displayed symbols against injustice, the excessive power of the junta and curbs on freedom.