An official shakes hands with a demonstrator after the Krabi coal-fired power plant protest outside Government House is ended. (Photo by Pattarapong Chatpattarasill)

Government spokesman Lt Gen Sansern Kaewkamnerd said this came after talks between representatives of the government and core leaders and coordinators of the Save the Andaman from Coal group who had submitted a proposal to the government.

The proposal and information from the protest leaders were forwarded to Prime Minister Prayut Chan-o-cha and Energy Minister Anantaporn Kanjanarat for consideration.

The proposal of the protesters was subsequently agreed on by the government. 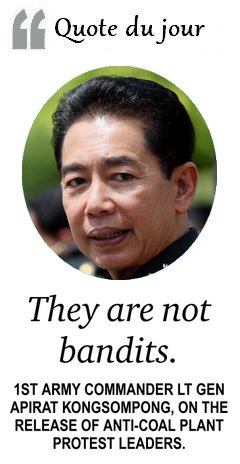 Under the agreement, the Electricity Generating Authority of Thailand would be instructed to start over again with the EIA and EHIA studies. The studies must be conducted with transparency and true participation by local people under the supervision of a tri-partite committee.

"Initially, the agreement will be forwarded to the cabinet meeting on Feb 21 for acknowledgement. It should be made clear that the government is concerned about the people. However, the plan to increase power production capacity along the Andaman coast will have to continue," the spokesman said.

Prasitthichai Nunual, one of the key coordinators of Save the Andaman from Coal, said the talks with the government representatives went smoothly. The protest leaders had been well looked after and the government had agreed to their proposals.

He declared an end to the protest, saying that protesters were set to return to their home province on Sunday. He said police would provide them with transport as well as food and water.

Mr Prasitthichai was one of the five protest leaders who were arrested on Saturday and had been detained by the authorities.

Two other leaders — Banjong Nasae, president of Thai Sea Watch Association, and Thatpong Kaedum, a local community rights activist — were taken away in the afternoon.

They were detained at the 11th Military Circle in Bangkok for questioning.

The five were brought to the protest site by Government House on Phitsanulok Road and released at about 11am on Sunday. They were accompanied by Lt Gen Apirat Kongsompong, commander of the 1st Army, and Pol Gen Chakthip Chaijinda, the police chief.

Mr Prasitthichai then declared the end of the protest.

Wiwat Chancherngpanich, Egat deputy governor for power plant development, said it would take at least six months for Egat to conduct the EIA and EHIA studies, after which the results would be forwarded to the cabinet for approval.

He expected the Krabi coal-fired power plant contract signing at the end of this year or early next year.

The protest began on Friday after the National Energy Policy Committee (NEPC), chaired by Gen Prayut, gave the nod to the construction of the 800-megawatt plant to be sited in Krabi's Nua Khlong district.