The military-led government has failed to address the fundamental causes of the country’s problems despite having been in office for more than two years, and its reform efforts are still falling short, well-known social critic and lecturer Thirayuth Boonmi says. 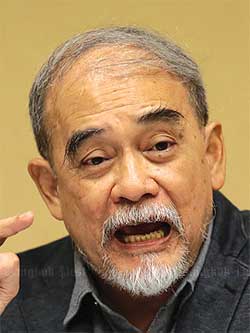 These structural problems which lie dormant will re-emerge after the regime steps down from power, said Mr Thirayuth who is a lecturer at Thammasat University’s College of Interdisciplinary Studies.

“For almost the past three years [under the regime], Thailand has been happy to have a new prime minister, who is a fun guy. The government has made achievements in terms of regulating things. But it has failed to tackle the core problems,” he said.

Speaking at an annual political analysis and criticism on Friday at the Election Commission at the Government Complex on Chaeng Watthana Road, Mr Thirayuth said the government’s efforts to solve basic problems should not be called reforms.

“Solving basic issues is not reform. I predict that about 60-70% of things regulated by this government will all go back to the way they were when the military steps down from power.

“These problems are only about boosting efficiency and any decent government can do it,” said Mr Thirayuth.

He also said the country will inevitably move towards conservatism while there will be little hope for any reforms at the structural level.
Reforms will face resistance from civil servants who stand to lose when reforms are enacted, he said.

Since seizing power in 2014, the National Council for Peace and Order (NCPO) has relied mainly on the Interior Ministry, the military and the police force, to carry out its work, Mr Thirayuth said.

He said the regime’s policies are centralised, increasing the power of civil servants rather than decentralising operations.

The removal of the Bangkok governor and the State Railway of Thailand governor were only intended to serve the needs of the NCPO, he said.

He also said that most members of the so-called “five rivers of power” — the NCPO, the National Legislative Assembly, the National Reform Steering Assembly, and the cabinet and the Constitution Drafting Assembly — hold conservative views.

While these bodies have some merits, they still have not provided any hope of reform. Some of their members also made it clear that they wanted Prime Minister Prayut Chan-o-cha to stay on in power so that they can cling on to power as well, Mr Thirayuth said.

Initially, the regime was praised for restoring peace and stability, and for helping end the violence that took place before the May 22, 2014 coup.

But now, public interest in the matter is wearing off and people have begun to lose confidence in the government because it has not shown any concrete achievements and has lacked the will to push for reform, Mr Thirayuth said.

Regarding the government’s bid to build unity, he said the government had come up with a raft of measures to promote reconciliation during its first two years in office.

But as it is entering its third year, the government appears to be going around in circles by setting up the committee for national administration under the framework of reform, national strategy, and reconciliation, Mr Thirayuth said.

He added that the military regime has entrusted the job of drafting the new charter and reform measures to a group of legal experts so that it can avoid the burden of pushing for reforms.

Mr Thirayuth suggested that the NCPO ensure the military and civil servants do not cooperate with corrupt politicians while empowering the civil sector so as to counterbalance the power of politicians.

He stressed the need for the government to tackle poverty and economic disparities as part of reforms.

He also said that national reforms are no easy task and this cannot be achieved by any particular group alone.

He noted that Thailand has no culture of working together to solve major problems plaguing the nation.

“Reform is about a plan of action, not a programme of ideas. In practice, reforms can be carried out only one at a time,” he said.