Reconciliation and national reforms are on most politicians' lips these days.

In a special interview with NATTAYA CHETCHOTIROS, Democrat Party leader and former prime minister Abhisit Vejjajiva warned that any renewed push for amnesty and persistent corruption after the next election will ignite a new round of conflicts more violent than any the country has seen; he also discussed his own future in politics. 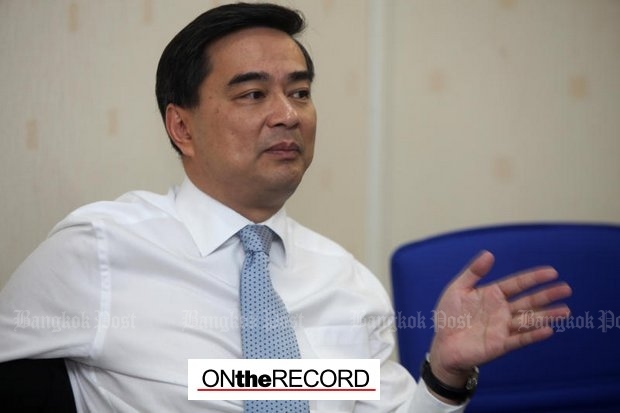 How will you assess the success of the Committee for National Administration under the Framework of Reform, National Strategy and Reconciliation?

I can't tell whether the committee will succeed in steering the country forward until after the next general election.

I don't want them [the government] to think that their initiative is already a success. We don't make any assessment until things really happen. From past experience, we have learned that "social contracts" (proposed by the government as a tool to realise national reconciliation) eventually cannot be trusted.

What do you think is the bottom line of this initiative?

I think they are trying as hard as they can. But I am not sure if they understand who was actually involved in the political conflict in the most recent years.

It seems the government leaders have been obsessed with the notion the political conflict occurred because (the Democrat Party) did not accept the result of the (previous) election.

I must say that it is a big misunderstanding if one thinks that winning or losing in an election causes conflict. That's not true.

If the conflict occurred because we lost in the 2011 election and refused to accept the result, why did the Yingluck Shinawatra government still manage to stay on for more than two years without any of us doing anything to disrupt her government?

It was because they proposed an amnesty bill, otherwise her government would not have been forced out of office.

The Pheu Thai Party often complains it was our fault for refusing to accept the poll result. Deep down, they also know the amnesty bill they tried to push through parliament would have touched off serious problems and led to conflict.

How do you think similar future conflicts can be prevented?

No matter who wins or loses in the next election, if corruption still persists and if a political amnesty push is revived, the conflicts among people will become more severe than in the past, and the people will not tolerate it despite the National Council for Peace and Order remaining in power.

The laws must not be abused again. If this can be achieved, that will be the success of the committee on reform, national strategy and reconciliation.

What about your future as the party leader? We learned that you are under pressure from some party members who think your quality as the party's selling point is beginning to wane. The novelty is wearing off.

I still continue doing my job while political parties are banned from engaging in activities.

All members want the party to succeed. If I lead my party to contest elections and fail to secure success, they won't keep me.

When they decide that someone else is better, they would naturally pick that person to take over the job. That's what our party is all about. I can accept it. No problem at all.

Does the party have any appropriate alternatives?

It all depends on party members.

If there is anyone who can lead the party to achieve success, then I can accept it.

But if they want to force me out in order to please those in power, I can't accept it, and I believe most party members cannot either.

The Democrats as a political party were not established to satisfy anyone and any change of its leadership won't bend to the will of those in authority.

We learned some members are backing Chuan Leekpai to replace you as party leader, while others are supporting Banyat Bantadtan to take up the party leadership.

It just so happens that three of us -- myself, Mr Chuan and Mr Banyat -- share the view that we will not change the party's stance so as to kowtow to people in authority in exchange for securing cabinet seats.

Everyone knows that we think along the same lines, particularly Mr Banyat who among us is the most ardent critic of the military.

While taking a break from politics, what has the party done to prepare for political party reforms?

We will have to wait for the [organic] bill on the parties to pass the National Legislative Assembly first. Then we will know what the party should do to adjust to the changes stipulated by the new law.

In the meantime, we are looking at ways to deal with the economic problems which have severe repercussions worldwide.

We are preparing to answer questions from the people as soon as the election date is declared.

The people have been concerned about the economy which has been in dire straits and the slow progress in tackling the problem.

They will be eager to know who can help them. The public will agree that populism is no longer the solution to the country's problems.

We must convince the public that our party is dependable and can help them. But the ban on political activities is still intact, so there is little we can do to communicate to the public.

Has the party prepared a candidate to run for the Bangkok governor election?

We don't know yet when the Bangkok governor election will be held. But we have to choose a candidate anyway.

But we are now more concerned the NCPO will scrap the tambon administration organisations, which will adversely affect the decentralisation of power.

What the NCPO is doing now is really a retrograde step.

For example, they have scrapped the positions of Bangkok district councillors despite the councillors being the ones who are always in close touch with the city residents' everyday concerns.

The district councillors did not have much power anyway and did not receive any budget allocations except their small monthly salaries.