Prime Minister Prayut Chan-o-cha needs to retain his wide-reaching Section 44 powers for the sake of security and for maintaining peace for the late King's royal cremation as well as the coronation of His Majesty the King, army chief Chalermchai Sittisat says.

Gen Chalermchai, also secretary-general of the National Council for Peace and Order, said Wednesday the section -- reserved exclusively for invocation by the prime minister -- remains an essential instrument for maintaining security.

Section 44 was first introduced under the previous interim charter.

When the new constitution was promulgated by His Majesty the King last Friday, it was carried over and is now incorporated into Section 265 of the current charter.

Gen Chalermchai said the security situation has been fairly stable although anti-government elements were staging movements "to stir up trouble". 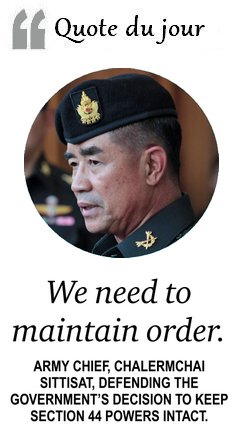 Interviewed on New Year's Day by Thai media, Gen Chalermchai pledged the army would never again seize power - because it would not have to. He said:

But on Wednesday, the general said the government also needs Section 44 powers intact so it can assert firm control over national security and ensure a smooth arrangement for the royal funeral, expected towards the end of October, and of the coronation of His Majesty the King, a date for which has not been announced.

Gen Chalermchai said the prime minister has made it clear he will only invoke Section 44 powers as necessary.

Some politicians have called for the section to be cancelled, arguing it limits people's freedom.

Critics also argued that keeping the section alive was akin to preserving the existence of the previous interim charter, warning it could backfire politically and legally.

Deputy Prime Minister Wissanu Krea-ngam has stressed Gen Prayut only intends to use the Section 44 powers for select purposes, such as removing bureaucratic obstacles to trade, or promptly tackling issues such as illegal fishing.

Gen Prayut, meanwhile, said his goal this year was to see through important government tasks which are still not finished.

"We need time to get the tasks done. I don't know who will take over [the next government]. I'm giving my all and my focus is to do the best for today," he said.

Responding to the critics' calls for certain rights to be restored, such as political parties being permitted to meet and organise political activities, Gen Prayut said the constitution presents a broad framework.

It does not follow that the exercise of people's rights and freedom can go unchecked, as this could lead to conflicts, Gen Prayut said.

The laws organic to the new constitution are being drafted.

One is specific to streamlining elections and the Election Commission, which needs to be enacted as the country prepares for the next general election, likely to be held in the middle of next year.

Gen Prayut said preparations for the election will proceed according to the roadmap with the countdown to the poll starting from New Year.

He added that once the organic laws are in place, plans to organise the election will step up, and political parties again can hold meetings and canvass for votes.

He also appealed to the media to be careful of what it reports, to avoid giving people ''the wrong idea".