The government has given assurances that a bill supporting its 20-year national development blueprint will not restrict future elected governments from making changes to the plan as they see fit.

Critics and political parties are concerned that the military government's 20-year national development plan which will be implemented under the bill will place a straitjacket on future elected governments.

They also said it was unfair that the coup-installed government is making plans to direct future governments for the next 20 years.

The National Legislative Assembly (NLA) on Thursday accepted the bill on national strategy for deliberation with a unanimous vote of 196-0, with three abstentions. A 33-member committee was then set up to scrutinise the bill. 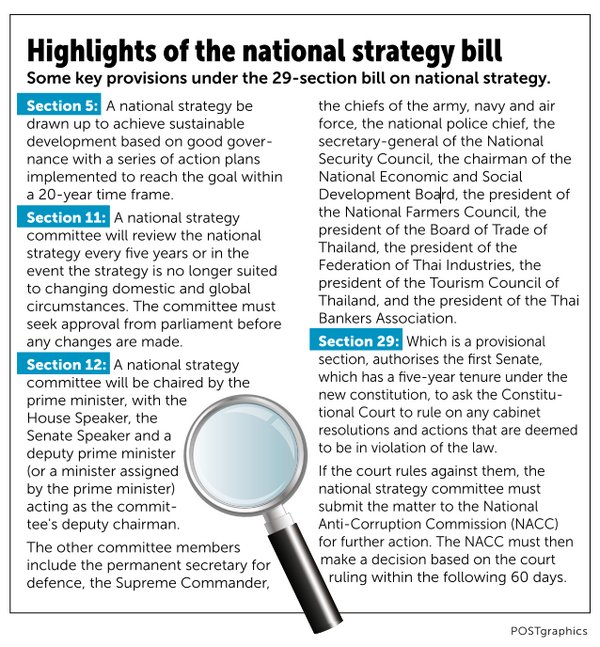 The NLA also voted 186-0 to accept the government's bill setting out action plans for national reforms for deliberation, with three abstentions. A 26-member committee was set up to vet this bill.

The bill still allows future governments to adjust the 20-year plan to suit changing circumstances both at home and abroad, though any changes must be in line with the law and the constitution, he said.

"Goals must be set for the long term to make it easy for planning, law-making and investment," Mr Wissanu told the NLA.

Still, he said, a range of measures will be in place to enforce compliance with national strategy, including warnings and coercive measures.

If state agencies fail to comply despite warnings, the National Anti-Corruption Commission will be asked to take action against the chiefs of those agencies, Mr Wissanu said.

"This plan is deemed to take precedence over all others. It is binding on all agencies," Mr Wissanu said.

He said the government has come up with action plans for six areas -- security and foreign affairs, boosting competitiveness in foreign markets, developing human resources, reducing social disparities, improving the quality of life and the environment, and enhancing state regulations.

The new charter also stipulates that forums must be held to gather public opinions on the national strategy bill and its action plans, Mr Wissanu said, adding that budget management and reform plans must correspond to the blueprint.

Also Thursday, the NLA approved a bill to transfer unused expenditure in fiscal 2017 totalling 11.9 billion baht to the central budget for emergency use.