Two retired generals and a fugitive red-shirt hardliner have denied any involvement in Monday's bombing at Phramongkutklao Hospital, which left 25 people injured, after they were suspected by authorities. 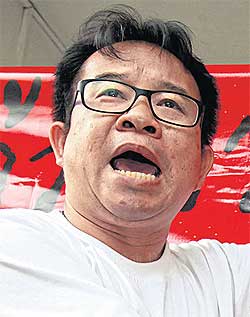 ‘‘ We are training civilian warriors without weapons.

Gen Panlop Pinmanee, former deputy director of the Internal Security Operations Command, yesterday dismissed suggestions that he might be linked to the hospital blast.

Citing information from security sources, a media report linked three retired generals whose names begin with the letters P, Ch, and S to the latest three blasts in Bangkok, including the hospital bombing.

The latest rash of incidents, which have all occurred close to the third anniversary of the 2014 coup, includes an explosion in front of the National Theatre near Sanam Luang and a blast outside the old Government Lottery Office on Ratchadamnoen Klang Avenue

He said he has served as a soldier all his life and has been well aware that hospitals and medical facilities are supposed to be off-limits to conflict and fighting.

"As a long-serving soldier, I know this rule well," Gen Panlop said while condemning those who were behind the hospital bombing.

Gen Panlop also insisted that he does not personally know red-shirt hardliner Wuthipong "Kotee" Kochathamakun, who is also suspected of being linked with the hospital blast.

Gen Chaiyasit Shinawatra, 71, a former supreme commander and a cousin of former prime minister Thaksin Shinawatra, is another general who came out to defend himself.

He insisted that he was not involved in the three blasts in Bangkok.

He has stayed away from politics for quite some time, Gen Chaiyasit said, adding that he often uses medical services at Phramongkutklao Hospital.

"As a former army chief, I was a bomb-buster, not a bomb-maker," Gen Chaiyasit said.

Meanwhile, Mr Wuthipong who was earlier named by army chief Chalermchai Sitthisat as an alleged conspirator, has rejected the allegation.

Speaking in an interview on the US-based Thai Voice programme, aired on YouTube, Mr Wuthipong, who faces lese majeste charges and is believed to be living in Laos, said he has been living in a forest and said the allegations against him were baseless.

He said that he has been on the run all this time and that his group does not have the resources to carry out such a bombing.

Security is usually tight at an army-run hospital, he said, seeming to hint that the blast was an inside job.

He also condemned those who were involved in the hospital explosion.

"If it had been me, I would have bombed Government House, not a hospital," Mr Wuthipong said.

"The hospital blast was the work of those in their own group [the military]."

Mr Wuthipong also claimed he is mobilising resistance against the government.

"We are training civilian warriors without weapons. When it's time, I will lead an uprising," he said.

"I have only just set up the organisation three, almost four months ago," he said, adding that the group was based "in the forest", without giving details.

He said the group constantly uses social media to instigate violence, adding that investigators are still looking into whether there is any connection between the latest hospital bomb and the recent arrest of hardliners.

Mr Wuthipong has also been implicated in another case that saw a cache of weapons confiscated in Pathum Thani in March.

Gen Chalermchai also did not rule out the involvement of rogue military officers in the bombing.

Yet his remarks about Mr Wuthipong reinforce comments by national police chief Chakthip Chaijinda that political hardliners or extremists may be responsible.

Investigators were verifying the identity of the suspect, he said.