According to Adirek Sripratak, the newly appointed executive committee chairman, given the company's vast overseas operations and integrated agri-industrial and food business, CPF could manage organic growth averaging 8-10% a year.

"But to fuel the company's revenue growth to exceed that rate, we need more M&A deals," said Mr Adirek, now 71.

"I've just arrived from Japan and is scheduled to fly again to Sri Lanka, Bangalore and Hyderabad to scout for new investment and M&A opportunities."

Acting as CPF's president and chief executive from 2003 to March this year, Mr Adirek was instrumental in expanding the global footprint of the company, which aspires to be a kitchen to the world. CPF has branched out to 16 countries, including Vietnam, the Philippines, Malaysia, China, India, Russia and Turkey.

Last year overseas operations and exports contributed 68% of the company's sales revenue worth 464 billion baht, with the remaining 32% coming from CPF operations in Thailand. 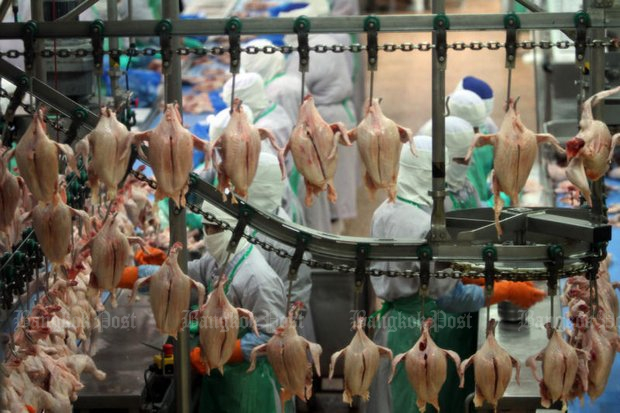 Workers process chicken meat at a CPF facility in Nakhon Ratchasima. The company plans an aggressive programme of mergers and acquisitions to increase revenue above last year's sales of 464 billion baht. (File photo by Apichart Jinakul)

CPF's international operations surged 12% last year to 286 billion baht, outstripping the growth rate of the domestic market, which rose only 7% to 179 billion.

With his new position as chairman, Mr Adirek said he feels much freer and has more time to explore for new investment opportunities and M&A deals for the group.

The two new chief executives are supervised by Mr Adirek.

Last year CPF clinched 11 overseas investment deals worth nearly 50 billion baht including one with Bellisio Foods, one of America's largest and fastest-growing frozen food firms, in December for a total consideration of US$1.08 billion (37 billion baht).

Founded in 1990, Bellisio Group is the third-largest maker and distributor of single-serve frozen entrees in the US, with household brands such as Michelina's, Boston Market, Chili's and Atkins.

The group has more than 50,000 distribution points in the US, and through its central production facility in Jackson, Ohio, is able to distribute its products to more than half of the US within 24 hours and nationwide within 48 hours.

The acquisition marks CPF's entry into the world's largest food market, enabling the introduction of the company's Asian offerings to the North American market. Bellisio's products should see greater penetration in the Asian market, tapping into the extensive distribution networks of CPF.

SuperDrob is a family-run company that sells fresh and processed poultry products as well as sausages and ham. Established 23 years ago, it exports half of its products to countries including England, France, Germany and China.

The deal marks CPF's first step in the poultry business in a European country.

Poland is a top exporter of poultry to the European market. The move will help the company respond faster to the regional consumer base as well as provide an opportunity for expansion into other businesses in Poland in which CPF has expertise.

The investment in WFGL will allow CPF to expand its distribution network for retail, and food service and production in Britain and the EU. WFGL is a British company with expertise in meat and ready-made products. The company also engages in the development, sourcing and supply of products across many food groups worldwide.

Mr Adirek announced recently CPF would invest 25 billion baht this year -- excluding any possible M&As -- mainly to accommodate its overseas investment expansion. The company aims to raise revenue from overseas operations over the next few years to 70% of the total from 68% now.

To this end, CPF's board early last month approved an increase in registered capital of 1.54 billion baht to 9.29 billion by issuing 1.54 billion new ordinary shares with a par value of one baht per share.

CPF plans to use the proceeds to repay loans and/or debentures of 27 billion baht by 2018 and finance future investment of 11.7 billion.

Mr Adirek expects its revenue to grow by at least 10% this year to about 500 billion baht.

According to CPF's executives, with earnings before interest, taxes, depreciation and amortisation worth 40 billion baht earned last year, and new capital, the company is quite financially ready for new investments.

However, Mr Adirek said the company would insist that before any deal is made, it needs to be thoroughly scrutinised by the board to be sure it supports CPF's core businesses.

"All factors need to be taken into account from the target's operating results, financial statements dating back five to 10 years, and whether business synergy will be generated before asking to personally meet management, visit a factory, conduct due diligence, determine a price valuation, and bargain over valuation under which some deals may take about a year," he said.

CPF shares closed on Friday on the Stock Exchange of Thailand at 24.60 baht, down 30 satang, in trade worth 723 million baht.