The government has pledged to speed up approvals and kick-start construction of key infrastructure projects before the much-anticipated but still-unscheduled general election.

The projects range from motorways and mass transit to double-track rail and high-speed train projects, worth a combined 2.4 trillion baht.

Deputy Prime Minister Somkid Jatusripitak said Thursday that all significant infrastructure projects planned for fiscal 2016 and 2017 would go to the cabinet for approval this year and begin construction next year, before the general election.

Mr Somkid was speaking at a seminar organised by the Stock Exchange of Thailand and attended by more than 700 international fund managers.

"During the past three years, the government has started driving various policies that are considered a strategic shift or an important turning point of the national developmental strategy from export-led growth to a balanced-growth economy, from a low-cost to a value-based economy," he said.

"The government, in particular, announced two years ago the intention to jump-start transport and logistics infrastructure development after a standstill of over two decades, with a budget of over 2.4 trillion baht of investment in construction of roads, expressway, motorways, mass rapid transit, double-track, high-speed trains, and construction and development of new airports, seaports and logistics hubs over the next five years."

Mr Somkid said joint investment in mass transit has already started for the Green, Blue, Orange, Yellow and Pink lines, and he promised bids by year-end on contracts for an additional three: the southern Purple, western Orange and Red lines.

He said the results of the bidding for an additional five routes of double-track rail and two motorways will be announced within the next two months, with investment to start this year.

In the case of the Thai-China railway, the project is expected to start before September. The high-speed train for Bangkok-Rayong and Bangkok-Hua Hin, as well as the mass rapid transit system in Phuket, which is under the public-private partnership fast-track scheme, during the next two months, should get the cabinet's nod by year-end.

According to Mr Somkid, Thailand needs to invest in the Thai-China rail project because the project is part of the One Belt, One Road initiative linking Asia, Eurasia, Europe and Africa.

Thailand will fail to catch up with the global development trend if it ignores the Thai-China rail project, he said. (Story continues below) 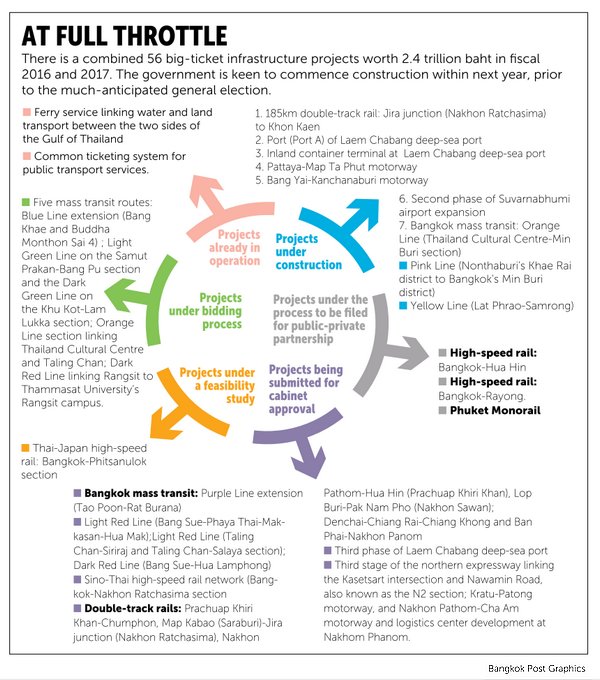 "The government intends to have every project started before the end of next year," Mr Somkid said. "Apart from this, the Finance Ministry is also preparing to sell Thailand Future Fund investment units in the next couple of months as another alternative for the country's infrastructure investment. The fund will be sold to Thai citizens and both domestic and foreign investors. These sources of financing will help save on annual government expenditure and maintain the ratio of public debt to GDP at below 50%."

Mr Somkid said Thailand is also developing the Eastern Economic Corridor with an infrastructure investment of more than 400 billion baht as a magnet for 10 targeted industries.

Mr Somkid assured 19 international fund managers with combined assets under management of US$6.3 trillion (214.2 trillion baht) that any subsequent government would be legally bound to continue infrastructure projects begun by the current government.

He cited a clause in the new constitution that says Thailand's 20-year national strategic development plan must be continued regardless of any change government.

The first two brownfield expressways will be used as underlying assets for the TFF, Mr Apisak said, adding that the government will not guarantee a return for the first batch of the TFF.

According to the capital-raising plan that won the cabinet's nod, 45% of future revenue from the Chalong Rat Expressway (Ram Intra-At Narong) and Burapha Withi Expressway (Bang Na-Chon Buri, owned by the Expressway Authority of Thailand), will be backed TFF units.

Although foreign investors have expressed interest in putting money into the TFF, Prime Minister Prayut Chan-o-cha wants to give priority to local investors in subscribing to the infrastructure fund's units, Mr Apisak said.

Greenfield projects will be the underlying assets of the TFF's second batch, which could be allocated only to institutional investors, he said, noting that the government will guarantee the return for unit holders of the second lot.

The cabinet in December approved the launch of the TFF to raise liquidity from the public for the construction of massive state infrastructure projects, lowering the government's fiscal burden.

While public debt is still below the 60% ceiling, the government must seek other funding sources for its big-ticket projects.

Public debt stands at 43% of GDP, meaning 2.6 trillion baht is left before reaching the threshold.