Flowers are placed on the replica of the People’s Party plaque in Thammasat University on Saturday to mark the 85th anniversary of the Siam Revolution. (Photo by Pattarapong Chatpattarasill)

YouTube has blocked viewers in Thailand from watching a version of <i>The Great Dictator</i> at the government's request, on a day that featured a few subdued observances of the 85th anniversary of the Siam Revolution. 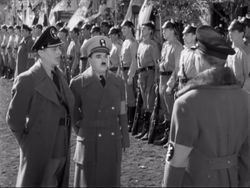 A screenshot taken from 'The Great Dictator' film.

Access to the video with Thai subtitles was blocked after the Thai Academic Network for Civil Rights on June 12 announced plans for a synchronised viewing and sharing of the movie and the Thai documentary The Six Principles at 7pm on Saturday to mark the anniversary of the end of absolute monarchy.

The Great Dictator is a 1940 political satire starring the legendary comedian Charlie Chaplin, who also wrote and directed the film to express his dismay at the rise of Adolf Hitler and fascism.

The Six Principles was produced by the Pridi Banomyong Foundation and Thai Film Foundation about the first declaration of the People's Party when Siam changed to constitutional monarchy in 1932. It remains accessible on YouTube.

It was found on Saturday, however, that The Great Dictator could not be viewed because "this content is not available on this country domain due to a legal complaint from the government".

It was not clear whether the reason was the content of the film or the subtitles later added to it. Other versions of the film are still available on the video-sharing network.

Despite increasing efforts by authorities to downplay the significance of the 1932 event and even to discredit some of its participants, activists, academics and students went ahead with low-key commemorations on Saturday.

One act that did not escape the watchful eyes of the military government was an attempt by an activist to place a replica of the missing People's Party plaque in the Royal Plaza. Its disappearance in April and replacement with a plaque bearing a royalist message remains a mystery.

Ekachai Hongkangwan was reportedly taken by the military at 8.30am on Saturday after he tried to install the replica, according to Anon Nampa, an activist lawyer.

Earlier, Mr Ekachai wrote on Facebook that he would reinstate the plaque at 9am on Saturday.

At Wat Phra Si Maha That in Bangkok's Bang Khen district, a group of Kasetsart University students paid their respects to the People's Party and made merit. They later walked to the Constitution Protection Monument at Phranakhon Rajabhat University and held some activities to mark the arrest of some of their group during a protest on this day two years ago.

They then read a declaration, condemning any act by the state to destroy or topple democracy, to use violence against people or subvert the right and freedom of people to express political views.

Their every move was watched by military officers who also took pictures of them.

At Thammasat University on Saturday afternoon, security officials invited the 10 scheduled speakers for a 10-minute talk about the framework and content of their seminar before they could begin. Their event was titled "Uprooting of the Legacies of the People's Party".

Maj Puttinart Pholphayahasena, a son of Phraya Phahonphonphayuhasena, the leader of the People's Party, said: "Of all Thailand's many coups, the only one I can accept is the one staged by my father and other People's Party members. This is because they didn't pardon themselves. They did it knowing it they could face high treason charges. They did it with sincerity for the people."

Ekachai Chainuwat, an independent law academic, said the People's Party chose the parliamentary system for the country with three branches to protect sovereignty, but said that in his view the judicial branch was the one in dire need of reform.

"Unlike the other two branches, it is not linked to the people and is the only organisation that hasn't been touched even after the rule the country changed," he said.

In addition to the concept that people are the owners of sovereignty and the parliamentary system, another legacy of the People's Party is the rule of law.

"Although the principle of the rule of law was not written in the first constitution, it appears on the six principles of the People's Party," Worachet Pakeerut, an academic with the Nitirat group, wrote in a book titled 80 Years of Democracy. 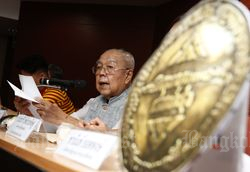 "Is it proper to place all hopes on a single person or group of people?" asks Sulak Sivalaksa at a seminar at Thammasat University on Saturday. (Photo by Pattarapong Chatpattarasill)

In an interview with Prachatai, Thongchai Winichakul, a well-known Thai historian, said: "The greatest failure of the rule of law in Thailand is legal inequality in which the judicial system has helped to establish that certain groups of people are above the law.

Sulak Sivaraksa, a writer and independent academic, said the 1932 revolution would bear fruit if people learned from the past and had the courage to face the truth.

“We need to find allies. We need to tell the truth to those in power so they won’t get carried away," he said. "Is it proper to place all hopes on a single person or group of people? All sectors should be able to check those in power.

“If we’re determined to move on from capitalism and dictatorship to democracy, the 1932 revolution will return and the far right will lose. I therefore urge us to take back the junta and bring us the essence of democracy."

Coupmakers from past to present truly believe they are good people so they are more fit to rule. They view politicians as immoral people, he said.

Flowers are placed on a People’s Party plaque in Thammasat University on Saturday to mark the 85th anniversary of the Siam Revolution. (Photo by Pattarapong Chatpattarasill)

A woman looks at memorial plaques of some members of the People's Party at Wat Phra Si Maha That in Bangkok's Bang Khen district. (Photo by Tawatchai Kemgumnerd)

Suspected insurgent killed in clash with troops in Narathiwat