Embattled former prime minister Yingluck Shinawatra claimed Wednesday the government froze her bank accounts, shortly after Prime Minister Prayut Chan-o-cha vowed her assets would not be seized until a court ruling was delivered on her rice scheme case.

Using Twitter to escalate the war of words between her and the military regime, Ms Yingluck implied that Gen Prayut, as head of the National Council for Peace and Order (NCPO), had either not been informed of the move or had deliberately misled the public. 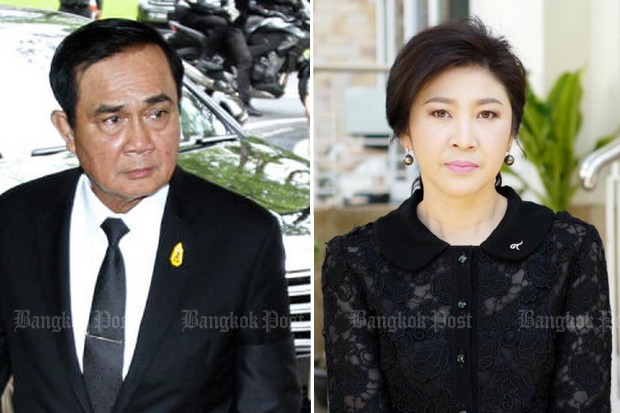 "It is not true what NCPO leader said that seizure of my asset is only in preparation, my bank accounts have already been confiscated," she tweeted late Wednesday afternoon.

It is not true what NCPO leader said that seizure of my asset is only in preparation, my bank accounts have already been confiscated. https://t.co/FAIPWb7oe5

"Although [they] have been seized - and all of my assets were being seized, until I petitioned the Administrative Court to stop that - I would say I'm staying strong," Ms Yingluck wrote.

"The government chose to do this because it believes it has the power to do anything it wants."

Somchai Sujjapongse, permanent secretary of the Ministry of Finance, said earlier the authorities was identifying her assets and had given the details of 12 bank accounts under her name to the Legal Execution Department (LED).

"In fact, today, she is still not guilty," said Gen Prayut. "After the court gives the ruling, the procedure [to claim her assets] can be carried out."

Ms Yingluck has been ordered by a government-installed panel to pay 35.7 billion baht in compensation for her alleged dereliction of duty in a rice-pledging scheme that reportedly cost the government five times this amount after farmers were paid above-market prices.

The ex-premier is also fighting a criminal charge of dereliction of duty in the rice scheme at the Supreme Court's Criminal Division for Holders of Political Positions.

She insisted she would continue fighting to prove her innocence through her closing statement at the Supreme Court this coming Tuesday.

The court is set to hand down its ruling on Aug 25. She is scheduled to sum up her defence Tuesday, at her final court appearance before the final decision.

Ms Yingluck petitioned the Administrative Court on July 19 to issue an injunction against the order to confiscate her assets.

Speaking about the court's consideration of the petition, Terdpong Kongchan, in his capacity as deputy spokesman, said the court on Monday sent letters to the Finance Ministry and the LED to give information in relation to the case within 15 days.

They need to explain why they froze the bank accounts and the necessity of seizing her assets, as well as the process used, he said.

The organisations are expected to send the information to the court in mid-August.

Earlier on July 7, Ms Yingluck asked the Constitutional Court to rule on whether the proceedings of her case contradicted Section 235 of the 2017 charter. The court dismissed her petition on July 21, a move she subsequently appealed.

She said if the Supreme Court makes a final judgement on her case -- without giving her the chance to ask the Constitutional Court to examine the legality of the process -- her rights, as guaranteed under the charter, would have been illegally trampled on.

She said she was uncomfortable lodging the petition for fear of annoying the Supreme Court judges but that she had no alternative in her quest for justice.

A court source said the judges will rule on her petition on Aug 1, the same day as her closing statement.

But it is unclear when she would be able to appeal as the organic law on the deliberation of criminal cases involving holders of political positions must come into force first, he said.

If the Supreme Court hands down the ruling before the law comes into effect, she would be entering a legal grey area, he added.

Mr Wissanu said he believes the law would include a provisional clause allowing her to lodge another petition.

Deputy Prime Minister Prawit Wongsuwon, who oversees national security, said the government will not bar people from coming to the Supreme Court to support Ms Yingluck at the Aug 25 ruling.

Asked whether former MPs or political leaders would be allowed to arrange transportation for people to go to the court, Gen Prawit said this would be illegal.

"There will be no riot," said Anusorn Iamsa-ard, acting deputy spokesman of the Pheu Thai Party, of which Ms Yingluck was formerly a powerful member.