Former prime minister Yingluck Shinawatra reacts to her supporters in front of the Supreme Court's Criminal Division for Holders of Political Positions in Bangkok as she arrives to attend the last witness hearing in her rice scheme trial last Friday. (Photo by Seksan Rojjanametakun)

A lawyer for former prime minister Yingluck Shinawatra has accused the Bangkok Bank of transferring her money to the Legal Execution Department without waiting for the court's decision on an application for an injunction.

Nopadol Laothong said on Thursday the department's bureau for civil judgment enforcement in Bangkok wrote to Ms Yingluck on July 18, informing her of its move to seize her assets as ordered by the Finance Ministry. Ms Yingluck received the letter on July 24, he said.

The Bangkok Bank had then written to inform her it had frozen her accounts and withdrawn the money to hand it over to the civil enforcement bureau as ordered, he said.

Other banks where Ms Yingluck had accounts had not reported if her money had been withdrawn, Mr Nopadol said. 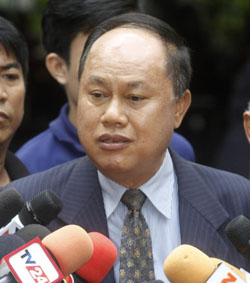 He had written all those involved and asked them to wait for a decision from the Administrative Court as he had earlier applied for a court injunction against the seizure order. He saw no reason for any rush to seize Ms Yingluck's assets.

"If an administrative organisation seizes assets without waiting for the court's consideration, will the judgment of the court remain meaningful?" Mr Nopadol said.

The Finance Ministry said on Monday it had submitted details of 12 bank accounts held in Ms Yingluck's name to the Legal Execution Department so action could be taken to seize her assets. The ministry would continue to identify her other assets.

The ministry's civil liabilities panel chaired by comptroller-general Manas Jaemwe decided the former prime minister must pay 35 billion baht of the estimated 530 billion baht in losses to the state incurred by her government's rice-pledging programme.

For the previous 2011/12 crop year and 2012 second crop, for which damages were set at 115 billion baht, the panel decided the former prime minister did not have to take responsibility as they occurred before she was warned by the National Anti-Corruption Commission, the Auditor-General's Office and Public Debt Management Office that the losses had already amounted to 200 billion baht.

The Supreme Court for Holders of Political Positions will rule on the case on Aug 25. If found guilty, she faces a prison term of up to 10 years, or she may ask the one-tier court to reconsider the case as allowed under the 2017 constitution.