Ex-premier Yingluck Shinawatra was in Ubon Ratchathani on Thursday, a personal and Pheu Thai Party stronghold. According to her social media pages, she just went to plant marigolds to mark the birthday of His Majesty the King. and the late king Bhumibol. (Photo via Twitter/@PouYingluck)

As ex-prime minister Yingluck Shinawatra awaits the Supreme Court's verdict on the rice-pledging scheme, 11 other cases linked to her that may involve abuses of power are being probed by the National Anti-Corruption Commission (NACC).

One covers the multi-million-baht compensation her government paid to victims of political conflict that started in 2005 when protests were staged against her older brother, Thaksin Shinawatra, who was ousted as premier in a 2006 coup.

The conflict extended to 2010 when red-shirt protests took place against the administration of Abhisit Vejjajiva -- with compensation again supplied by Ms Yingluck's government.

As the NACC is now looking into claims the compensation was not paid out in line with the law, the issue has caught the attention of the public. Pundits speculate as to whether the various compensation packages paid out by the last few governments -- including the current military regime led by Gen Prayut Chan-o-cha -- have been fair and legal.

According to the Isranews Agency, three other accusations relate to the Yingluck government's 350-billion-baht water management plan.

They involve what is alleged to be an illegal order issued through an executive decree to borrow the money for the project, an unclear payment plan, and a failure to clarify details of the large-scale water-management system.

The cabinet allegedly failed in its responsibility to take action against state agencies that did not reveal their procurement process in a transparent manner online as recommended by the NACC. 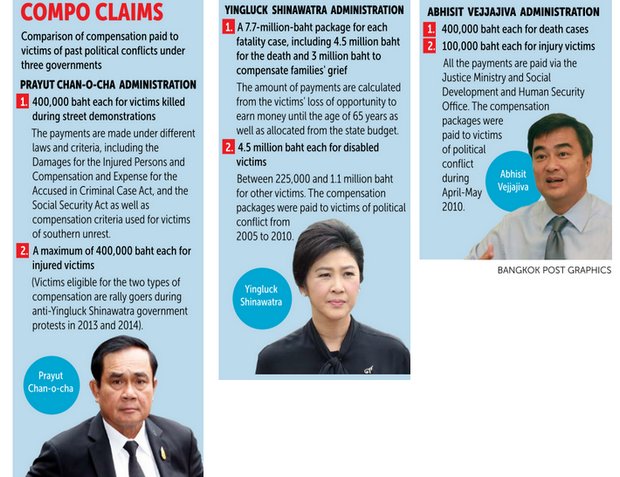 The Yingluck administration has also been accused of failing to punish former interior minister Charupong Ruangsuwan for his alleged involvement in a 2014 speech by red-shirt leaders implying the kingdom should be separated.

During the 2013-2014 protests by the anti-Yingluck People's Democratic Reform Committee, her government was accused of overreacting to the group's decision to stage a mass rally against it.

Ms Yingluck also stands accused of having a state-run television channel broadcast a boxing event in Macao that was presided over by her older brother Thaksin. His opening speech was alleged to have ramifications for national security.

In the compensation issue, the NACC's probe panel is working to conclude its findings before forwarding them for final consideration to the nine-member corruption watchdog, according to the Isranews Agency.

NACC secretary-general Sansern Poljeak insisted the revelation of the 11 cases against Ms Yingluck was not a bullying tactic.

His commission is finding out if Ms Yingluck and her cabinet illegally granted a total of 577 million baht to 524 victims of political violence by setting "unprecedented regulations" which were not in line with laws, the Isranews Agency said.

A large compensation sum given by the Yingluck administration for each death in the protests was estimated based on each victim's loss of income.