Supporters of former prime minister Yingluck Shinawatra swait outside the Supreme Court's Criminal Division for People Holding Political Positions, where she gave her closing oral statement in her rice-pledging trial on Tuesday. (Photo by Wichan Charoenkiatpakul)

Former prime minister Yingluck Shinawatra told the Supreme Court in her closing statement on Tuesday she had done nothing wrong in handling the rice-pledging programme, a core policy she had committed to implementing to help farmers.

The former prime minister insisted she had never ignored calls for investigation and action when problems arose. She also said she definitely did not collude in or condone corruption involving rice sales.

She said the accusations and charges against her were illegitimate, and gave six reasons. 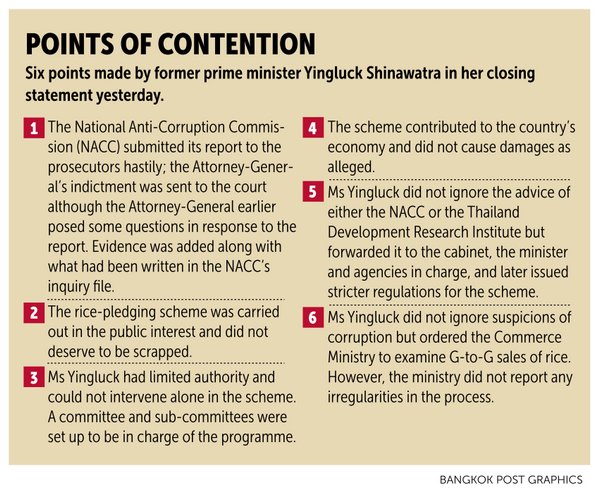 First, the National Anti-Corruption Commission (NACC) had submitted new evidence after it charged her, she said.

“When the NACC first accused me, it submitted 329 pages of documents which took 79 days to look into. It then rushed to charge me one day after the Constitutional Court removed me from office even though the corruption accusations against others involving the rice sales had not been concluded.

“It then brought on another 60,000 pages of documents in the rice sales case and used them as new evidence against me even though they were not there when it charged me.”

Second, rice pledging was a core policy of her government, and had to be implemented.

Third, on the charge of neglect of duty, she had set up committees and subcommittees to handle the programme with checks and balances.

“These committees implement the policy. As prime minister, I could not have intervened and arbitrarily exercised power. I couldn't just do that when I felt like it, or drop it when I didn’t.”

Fourth, the programme did not cause damages as charged.

“On the contrary, it benefitted the economy both directly and indirectly. Farmers had more income and the government could collect more value-added tax [from their increased spending]. The National Economic and Social Development Board also said the programme should continue to 2015, when the  Asean Economic Community began.”

Fifth, on the accusation she violated Section 157 on malfeasance by ignoring ignoring the written warnings of the NACC and the Auditor General’s Office, the former prime minister said she forwarded them to responsible committees, appointed Chalerm Yubamrung to chair an audit committee and told provincial agencies to be on alert for rights fraud.

“But since no agency confirmed the wrongdoing, I, as prime minister, had to listen to them as they had expertise on the issue.”

Lastly, she denied she had failed to act on rice sales irregularities.

“The accusation involves the implementation level with a committee taking responsibility for it, as well as the Foreign Trade Department of the Commerce Ministry.

“The cabinet was cautious about rice sales. It set the criteria and tighten preventive measures even before the censure debate on the government-to-government rice sales.”

In conclusion, she repeated the policy aimed to help farmers.

“I did nothing wrong. What I did was apply my experiences as an ordinary woman born upcountry who is familiar with the misery of farmers -- who were once called the spine of the country that deserve to be supported and taken care of. I did just that when I implemented the programme even though the push for the policy for a better life of farmers backfired on me and I had to fight the case with prosecutors who tried to distort the facts and accuse me unfairly.

“Before Your Honour passes judgement, I would like to plead with you to decide the case based on the facts, laws and the witnesses and evidence brought to trial in a legitimate and honest manner. Please don’t listen to anyone who has tried to influence the case, even if he is the chief of the National Council for Peace and Order, who misled the public when he mentioned my case on July 25, saying 'If it’s not wrong, how could it come to trial?'

“I plead with you to dismiss the case.”