The government and military regime denied Tuesday any role in the reported abduction and disappearance of red shirt supporter Wuthipong Kochathamakun, better known by his nickname Kotee.

Human Rights Watch reported, "after interviewing multiple witnesses" that 10 men in black had invaded the fugitive's residence in Vientiane and took him away.

Mr Wuthipong's wife and a friend were tasered during the lightning abduction but were left behind by the kidnappers and recovered.

According to the US human rights group, Mr Wuthipong was assaulted last Saturday morning in Vientiane.

A group of 10 armed men dressed in black conducted the raid, snatched Mr Wuthipong, forced him into a waiting car, and drove away. 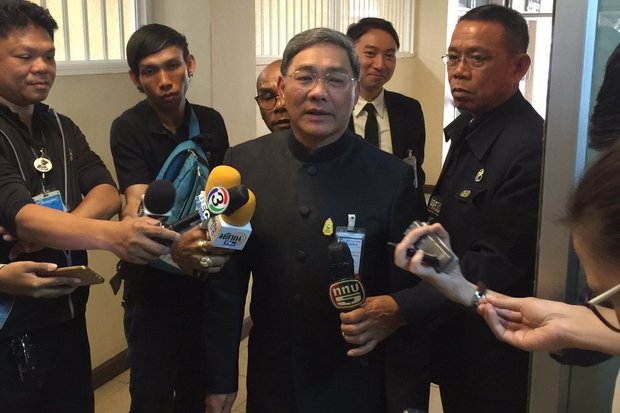 Thawip Netniyom, National Security Chief, told reporters he had no knowledge of the reported abduction. (Photo via Twitter/@wassanananuam)

"We have to investigate further as there are several reasons why he (Kotee) might just slip away to create news," Gen Thawip claimed.

He also said "authorities" had monitored Mr Wuthipong in Laos. "We haven't implemented any other measures than that", he claimed.

"Wuthipong's shocking abduction by armed men in Vientiane needs to be fully investigated; it should not be treated with silence or swept under the rug," said Brad Adams, Asia director at Human Rights Watch

The regime has pressed Laos to extradite Mr Wuthipong at least three times since last October. He faces charges of lese majeste.

In March, the government accused Wuthipong of being the owner of an arms cache found near his former home in Pathum Thani province. A statement said Mr Wuthipong had planned the assassination of Prime Minister Prayut Chan-o-cha.

Gen Thawip said the outspoken anti-royalist could have engineered his own abduction.

"His disappearance was likely aimed at creating a buzz", Gen Thawip said. "Such news is designed to affect the government."