After a boat tour and briefings from local officials, Prime Minister Prayut Chan-o-cha explained to Sakon Nakhon how to clear floodwaters and clean up the town in a week. (Screen grab from video, Thaigov.go.th)

Prime Minister Prayut Chan-o-cha instructed authorities Wednesday to focus on the flood-plagued province of Sakon Nakhon and ensure most of the excess water is released into the Mekong River within a week.

After the floodwater is depleted, a full-scale rehabilitation plan will be implemented in flood-ravaged areas including industrial and agricultural businesses, he said.

Gen Prayut was speaking during his visit to the province after he was briefed on the situation there by provincial governor Witthaya Chanchalong and Royal Irrigation Department chief Sanchai Ketworachai.

He expressed his appreciation to local officials who he said worked at full steam to assist villagers.

Meanwhile, Government House is raising donations to help the flood victims, it said. Donors are eligible for tax reductions if they pledge to government-registered funds.

Gen Prayut said an additional budget has been allocated to repair Hua Sai Khamin reservoir in Muang district after it overflowed following heavy rains. The repair work is due to be completed by Aug 12.

The reservoir will be dredged to increase its capacity, officials said.

After the maintenance work wraps up it will be able to conserve an additional 600,000 cubic metres of water, bringing the total capacity to 3 million cu/m, they said.

According to the prime minister, the province was recently hit with 500 million cu/m of rainwater, exceeding the reservoir's 240 million cu/m capacity and leading to overflowing in Muang district.

Gen Prayut also ordered inspections of the Kam and Un rivers, as well as forest land on Phu Phan mountain to assess how much rainwater they can absorb.

He also requested the media refrain from publishing what he described as a trivial matter, referring to the breach of Huai Sai Khamin reservoir.

"Now we are using 40 to 50 pumps to drain water from flood-hit areas in Sakon Nakhon," he said.

"Would these facilities be sufficient if floods were to strike several provinces at the same time? No, we'd all be in trouble. So, we shouldn't make a mountain out of a molehill," he said.

Gen Prayut said villagers in flood-prone areas were still being warned to prepare for heavy rains that could trigger flash floods. 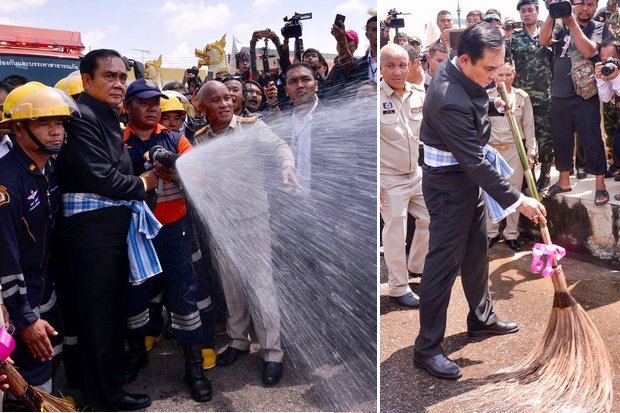 The prime minister applied both a hose and a broom to Sakon Nakhon street during his visit. (Photos Twitter/@wassanananuam)

The prime minister then travelled to Nakhon Phanom to inspect floodwater discharged from Sakon Nakhon at a sluice gate in That Phanom district.

Seven of 12 districts in Nakhon Phanom were reported to have been hit hard after the province was inundated with floodwater from Sakon Nakhon. The situation was exacerbated by heavy rains, flash floods and runoff from nearby mountains.

Over 53,000 residents from 17,000 households were affected by flooding while 134,000 rai of farmland was devastated, according to reports.

The sluice gate inspected by Gen Prayut was the last barrier to filter overflow from Nong Han Lake, the country's second-largest freshwater lake.

Eleven provinces in Thailand have been severely ravaged by flooding due to tropical storm Sonca, according to Somchai Lertlarpwasin, director of the northeastern-based Bank of Thailand.

Many farms have been swallowed by floodwater causing estimated damages of anywhere between 7 billion baht and 10 billion baht.