Some state officials were complicit in Yingluck Shinawatra's flight from justice this week and may have facilitated her escape to Cambodia, where she was assisted by people of influence en route to the Middle East, sources told the Bangkok Post on Friday.

"Let's just say the powers that be gave her the green light to go," said a source close to the upper echelons of power in Thai politics.

"If she had been convicted or jailed it would have caused more trouble and social unrest, so letting her leave was considered the best option," the source added.

The embattled former prime minister shocked the nation yesterday by failing to show up for the final judgement in her rice-pledging scheme trial.

Ms Yingluck's lawyer claimed she could not attend due to a complicated form of earache known as Meniere's disease.

A guilty verdict in the dereliction of duty case could have seen Ms Yingluck face a maximum prison sentence of 10 years and a lifetime ban from politics.

Two other politicians who served under her and were being tried for graft in government-to-government rice sales cases received sentences of 42 years and 36 years, respectively.

In her latest role as a fugitive from justice, Ms Yingluck took a private jet to an airport in Trat, where she crossed the Thai land border to Koh Kong province accompanied by her associates, a source close to her family told the Post.

"Khun Yingluck travelled to Cambodia and then took a flight to Singapore to catch another to Dubai," the source said.

Ms Yingluck's older brother Thaksin Shinawatra, who was ousted as prime minister in 2006 and now lives in self-imposed exile, is believed to be residing in the same emirate.

The other source said she "first made her way to Phnom Penh, where she received assistance from various powerful figures in the country".

On Wednesday, pictures and video clips of Ms Yingluck making merit at both Wat Rakhang Khositaram in Bangkok's Noi district and at her home in the capital were uploaded on her Facebook page.

However, pundits suspect these served as a ruse to distract the attention of security forces while she made her escape. The timing of her departure from Thailand remains unclear.

Ms Yingluck was still using social media to issue messages as of Thursday.

One Facebook post urged her supporters not to visit the Supreme Court on Friday out of concern for their safety as the regime has not only banned public gatherings but deployed thousands of personnel at the compound.

Observers say the Shinawatra family has longstanding ties with leading figures in Cambodia. The daughter of Yaowapa Wongsawat, another of Mr Thaksin's younger sisters, married the son of a Cambodian MP, a key decision-maker in the economic policies of Prime Minister Hun Sen. The MP also runs hotels and property businesses there.

Ms Yingluck got help obtaining a Cambodian passport before venturing on to Singapore in her private jet and later flying to Dubai to see her brother, the sources said.

A message by a high-ranking police officer on the social messaging app Line that was shown to the Post suggests she left the country on Wednesday. 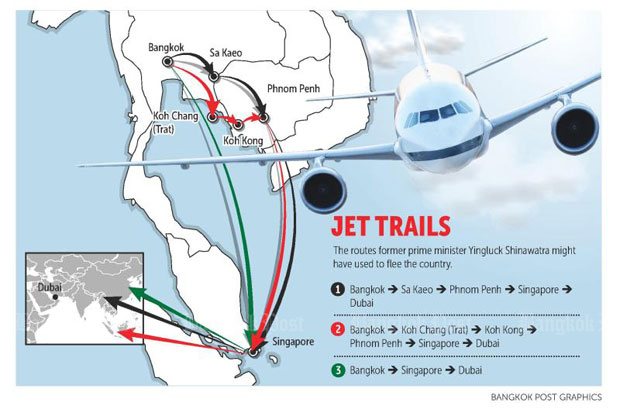