A former commissioner of the Metropolitan Police Bureau is suspected of masterminding the escape of ex-prime minister Yingluck Shinawatra after a police colonel admitted during questioning he was ordered to help Ms Yingluck flee, a source says. 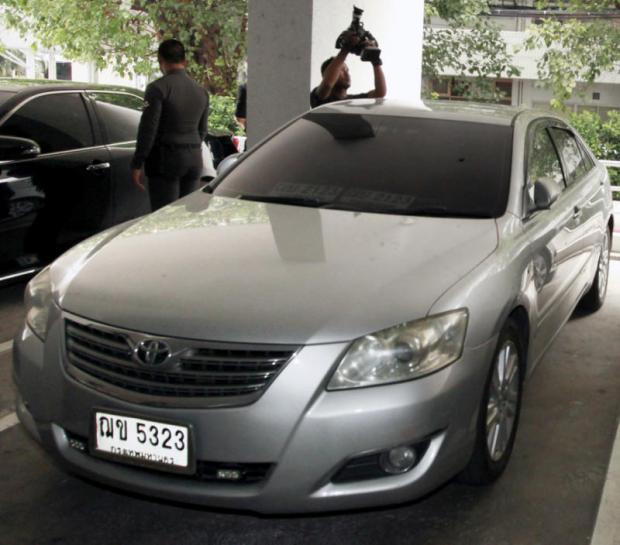 Police bring a Toyota Camry for examination on Friday. Fingerprints and DNA samples were collected from the car, which was abandoned after it was allegedly used to take ex-premier Yingluck Shinawatra to the Cambodian border. (Photo by Pornprom Satrabhaya)

Deputy Prime Minister Prawit Wongsuwon said on Friday the senior officer has revealed the name of the person who orchestrated the escape, but Gen Prawit refused to divulge it or comment when asked by the media if the alleged mastermind was a former city police chief.

The senior officer at the centre of the claims is Pol Col Chairit Anurit, deputy commander of the Metropolitan Police Division 5, who was transferred to an inactive post for his alleged connection to the escape, the source said.

Gen Prawit did not give details about the officers but their transfer orders were circulated among the media.

The trio was detained late on Thursday night in connection with a Toyota Camry that it is believed Ms Yingluck and her secretary travelled in to the border before the Aug 25 ruling.

Ms Yingluck did not show up to hear the Supreme Court's Criminal Division for Holders of Political Positions' ruling in the criminal negligence case over her administration's failed rice-pledging scheme. Her whereabouts remain unknown but she is presumed to have fled the country.

However, a diplomatic source said Friday Ms Yingluck may now be in London.

Gen Prawit, quoting Pol Gen Srivara, said the police colonel drove Ms Yingluck and her secretary to a meeting point where they switched to another vehicle. Gen Prawit said authorities have not yet found this vehicle.

A Toyota Camry was found near a house in Nakhon Pathom's Muang district on Thursday night and forensic police were collecting DNA and fingerprints inside the car.

The vehicle, with the fake licence plate "chor khor 5323", was captured on a surveillance camera on Aug 23 night passing a military checkpoint in Sa Kaeo.

However, checks with the Land Transport Department showed the plate did not match the engine serial number. Another possibly fake "chor yor 2123" plate was also found in the car.

The vehicle was registered to a female resident of Bangkok but the registration was suspended in 2012.

No documents were found in the car. Its original owner was being called in for questioning.

Pol Gen Srivara, who leads the search team assigned to locate Ms Yingluck, said the three officers admitted driving Ms Yingluck to Sa Kaeo but refused to give further details because the investigation is ongoing.

He said the three officers do not face criminal charges at this stage and it depends on their superiors to decide if they will face disciplinary action.

He declined to comment about the use of a police logo on the vehicle.

The deputy police chief also refused to say if the ex-premier had fled across the border out of concern that it would affect relations with Cambodia.

A police source said that an initial inspection of the confiscated Toyota showed the remains of what appeared to be stickers bearing the police logo on the car's doors.

According to the police source, Ms Yingluck left her house in Bangkok's Bung Kum district and changed to another vehicle in Min Buri. The car headed to Chachoengsao via Suwinthawong road and proceeded to the eastern border.

It is believed that another vehicle, similar to the seized Toyota Camry, was used as a decoy in the escape.

On Sept 9, authorities said security cameras captured images of a Mercedes-Benz believed to have been used in Ms Yingluck's escape. It was seen passing a military camp in Sa Kaeo but has not been seen since.

On Sept 12, Pol Gen Srivara said two vehicles were involved in taking the ex-premier to Sa Kaeo. One left the former premier's house on Aug 23 two days before the ruling.

There is no information about where Ms Yingluck went after allegedly arriving in Sa Kaeo.

Army chief Chalermchai Sitthisad said Friday authorities are still investigating possible routes Ms Yingluck could have used in her escape, noting there are several natural border crossings in the province.

A push for a new draft law governing the e-sports sector with an aim to protect children from violent games has caused panic throughout the industry.