Ong-art Klampaibul (left), a deputy leader of the Democrat party, and Sudarat Keyuraphan, a Pheu Thai co-leader, share views on the next election at a seminar at the Thai Journalists Association in Bangkok on Saturday. (Photo by Patipat Janthong)

Political party leaders are uncertain when the general election will be held but most think it should happen next year.

A leader and co-leaders of the country's three largest parties discussed the prospect at a seminar held by the Thai Journalists Association on Saturday.

Sudarat Keyuraphan, a Pheu Thai co-leader, said it was hard to predict when the polls would be held. "The government often talks about the roadmap but keeps postponing the election date. The picture might be clearer after election-related organic laws are finished."

Under the constitution, four of the 10 organic laws are required to be enacted before the election can be held. They cover the Election Commission, political parties, MP elections and selection of senators. The first two have already been approved by the National Legislative Assembly (NLA) and are in the process of seeking royal endorsement. The latter two have yet to reach the NLA.

Mrs Sudarat urged the government and the National Council for Peace and Order (NCPO) to make it clear how long they would stay. "This is not much of a problem for politicians. But let’s ask the people which is harder: having an election or not," she said.

Before discussing who would be its next leader, Pheu Thai should make clear its stand as a party that supports democracy under constitutional monarchy and people’s well-being, the former public health minister said. 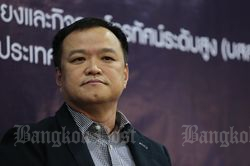 "If people demand the election, nothing can stop it from happening," says Anuthin Charnweerakul, leader of the Bhumjaithai party. (Photo by Patipat Janthong)

"Once we’re allowed to hold meetings we can discuss who’ll become the next leader but I think there won’t be any problem. We have several competent people. I believe it will be best if [parties] compete on policies but then it could be interpreted as populism," she said.

The big question mark facing Pheu Thai will be the future role, if any, of the Shinawatra family, now that both Yingluck and Thaksin Shinawatra have fled abroad.

Ong-art Klampaibul, a deputy leader of the Democrat party, said no one but Gen Prayut Chan-o-cha could say when the election would be held. "But I think he can’t give the answer. Each time he tries, confusion ensues, leading to more confusion in about everything."

The former PM's office minister said he personally believes that if the organic laws are passed without a snag, polls should be seen in November next year. "I hope the people’s voice will be respected this time," he said.

Anuthin Charnweerakul, leader of Bhumjaithai party, said his party was ready for the election whenever it is held. "With my limited experience, I can’t predict the trend. Whether the polls will be held sooner or later depends not only on the government and the NCPO, but also on the people. If people demand the election, nothing can stop it from happening. This government can put it off only as much."

He drew a comparison between an elected and coup-installed governments. "An elected government serves a four-year term. In nine months from now, this government will have served the same term. If it shoots itself in the foot, there will be some mechanisms hinting it should stop.

"If the organic laws aren’t finished, it will reflect badly on its efficiency. In the worst case, the election should be held in 2019. If it doesn’t happen then, we should run for our life."

However, Mr Anuthin believes Gen Prayut will keep his word. "If he doesn’t, history has shown us the kind of pressure he’d face." 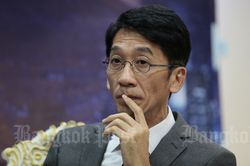 Pheu Thai and the Democrats should publicly reach an agreement pledging to prevent a recurrence of the pre-coup upheaval, says Prinya Thaewanarumitkul, a vice-rector of Thammasat University. (Photo by Patipat Janthong)

Prinya Thaewanarumitkul, a vice-rector of Thammasat University, said that according to the constitution the polls could be held in September next year at the earliest.

"The wildcard is the organic laws. If at least one of them is not passed, the charter doesn’t say what should be done. So if the NCPO wants to stay on, it can do so. Rewriting one or more organic laws should take at least a year. But it all depends on the people.

"Once the NCPO-installed government serves four years, people will start comparing it [with elected governments]," he said.

There are two factors allowing the NCPO to stay for so long. First, people feel the same problems in parliament and mobs will recur after the election, so the status quo is better, he said.

Second, elected politicians have not improved themselves enough. "They fought too much too hard over the last 10 years and have yet to restore the faith [people once had in them]."

He suggested Pheu Thai and the Democrats publicly reached an agreement pledging to prevent a recurrence of the pre-coup upheavals. "If they can prove it to the people, I believe the election can definitely be held next year."

Thaksin Shinawatra’s is the only elected government that served a full four-year term, from 2001-05.