A fresh manhunt has begun for former prime minister Yingluck Shinawatra after she again failed to show up at a Bangkok court Wednesday and was handed a guilty verdict in absentia, meaning she will now face five years in jail should she ever return to Thailand.

The embattled former premier was on trial for failing to stop graft in her administration's government-to-government (G2G) rice stock sales.

National police chief Pol Gen Chakthip Chaijinda said once police receive an order to enforce the court ruling they will seek a warrant for her arrest and coordinate with Interpol to track her down. 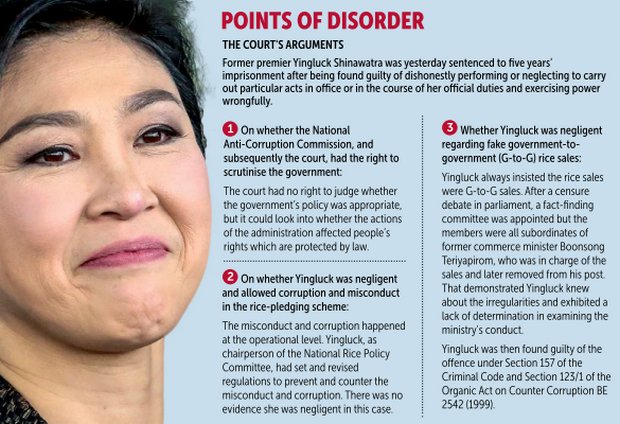 The Royal Thai Police asked all 190 of Interpol's member states to determine Yingluck's whereabouts since Aug 25 but no trace of her has been found so far, said Pol Gen Chakthip.

Deputy police chief Srivara Ransibrahmanakul said Interpol has yet to present any information showing that Yingluck is in the United Kingdom as some media have reported.

Prime Minister Prayut Chan-o-cha said on Tuesday he knows which country she is hiding in. He vowed to reveal where at an unspecified time after the verdict.
In Wednesday's ruling, the Supreme Court's Criminal Division for Holders of Political Positions sentenced Yingluck to five years for failing to stop fake and corruption-plagued G2G sales of rice from her rice-pledging scheme.

According to sources, the judges ruled 8-1 to impose the prison sentence.

The court said Yingluck had been aware of corruption in G2G deals with some Chinese state enterprises because lawmakers raised the issue during no-confidence debates.

Moreover, she had removed Boonsong Teriyapirom as commerce minister on June 30, 2013. Boonsong was recently sentenced to 42 years for the G2G rice scam.

The court said Yingluck failed to stop the delivery of rice under the deals, which fed corruption. This was tantamount to a "dishonest dereliction of duty" in violation of the Criminal Code and the anti-corruption law, it said.

The court did not hold her responsible for other corrupt activities or losses related to the rice scheme because those were the responsibilities of officials at operational levels.

Yingluck's lawyer Norawit Lalang said it was too early to discuss any plans to appeal.

He said he has not heard from his client since Aug 25, the original date of the judgement reading, and that he would study the court ruling until he hears from her again.

"She will learn about the ruling from media reports. Any appeal will be decided later," he said. 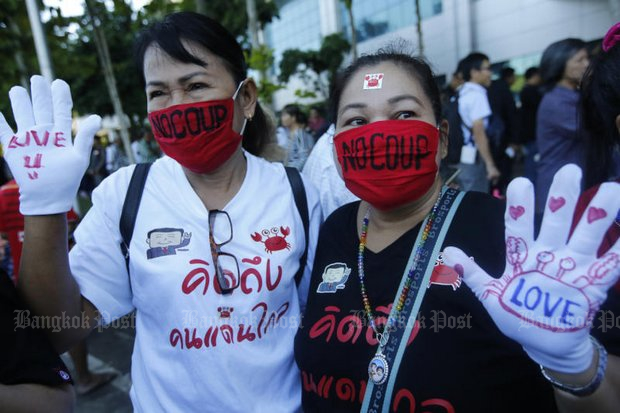 Supporters of ex-premier Yingluck Shinawatra showed their love Wednesday as the Supreme Court officially turned the ex-prime minister into a fugitive from the law. (Photo by Wichan Charoenkiatpakul)

Yingluck's supporters were clearly disappointed by the decision.

Aom, a 47-year-old casual worker, was one of about 100 supporters at the court Wednesday. She said she did not expect the decision to be "as harsh as it was".

"I thought she would at least be given a suspended sentence," she said. "I still believe she did not do anything wrong."

Anuwan Khemacha, 24, said Yingluck would probably not return to Thailand.

"Those who love and support her can rest assured she is safe as long as she is overseas," he said.

Leading red-shirt figure, Tida Tawornseth, said the sentence was no cause for alarm as it was expected.

"Experienced supporters of the Pheu Thai Party and of Ms Yingluck will not be surprised by the verdict," she said. "There shouldn't be any violent reaction."

Meanwhile, Pol Maj Gen Thawatchai Mekprasertkul, commander of the Central Police Forensic Science Division, said officers found the DNA of a woman in a Toyota car thought to have been used in Yingluck's escape. Police today plan to search Yingluck's house to collect DNA samples to compare them with those in the Toyota.