WASHINGTON: President Donald Trump welcomed Prime Minister Prayut Chan-o-cha to the White House on Monday - a rare instance of a military ruler being feted in Washington before even a nominal return to civilian rule.

Gen Prayut was greeted at the South Portico by both Mr Trump and first lady Melania Trump as he arrived for talks and a working lunch. Gen Prayut's Naraporn accompanied the prime minister.

"We've had a long and very storied history with Thailand," Mr Trump said as the pair sat in the Oval Office.

"We have a very strong relationship right now," he added. "And it's getting stronger in the last nine months", since Mr Trump became president. 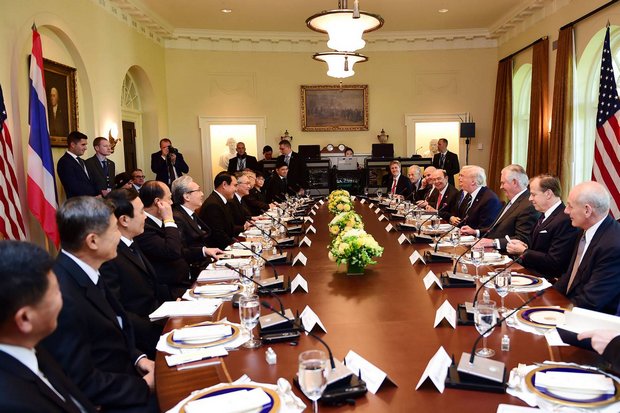 Shortly after the visit, Gen Prayut spoke to the US media.

He expressed concern over the hurricane damage in Puerto Rico and the massacre in Las Vegas that killed 58 people.

After praising the 184-year US-Thai friendship, he said that he and Mr Trump had discussed security, including the necessity of continuing the Cobra Gold war games.

"I have invited Ivanka Trump (the president's daughter and entrepreneur) to Thailand," he said.

Spokesmen said Gen Prayut wanted her to see the progress in the fight against human trafficking. She sells a line of clothing in the US, mostly made in China.

Gen Prayut said he and the president discussed North Korea, and he reiterated support for UN sanctions. Without using the word "Rohingya", the premier said they also discussed "the situation in Rakhine State".

There appeared to be no progress on either issue.

On the trade balance, Gen Prayut told reporters there are currently 23 large Thai firms with investments of $5.6 billion in the US, all of them planning expansions. The Thai firms provide more than 8,000 US jobs.

Human rights groups are outraged, but it gives a shot in the arm to US relations with its oldest ally in Asia.

Mr Trump told Gen Prayut he wants to reduce the US trade deficit with Thailand.

"Our relationship on trade is becoming more important and it's a great country to trade with", Mr Trump said to Gen Prayut in front of reporters. "I think we're going to try to sell a little bit more to you, if that's possible."

The Trump administration, like the Obama administration before it, maintains that relations with Thailand will only be fully restored when democracy returns. But rolling out the red carpet for Gen Prayut reflects a shift in US foreign policy priorities.

Mr Trump espouses a doctrine of "America First," prioritising US trade and strategic interests. He's more willing to engage with anti-democratic leaders and less troubled by their human rights records.

It's not that unusual for US presidents to meet autocrats in the Oval Office, but coup leaders are more contentious. 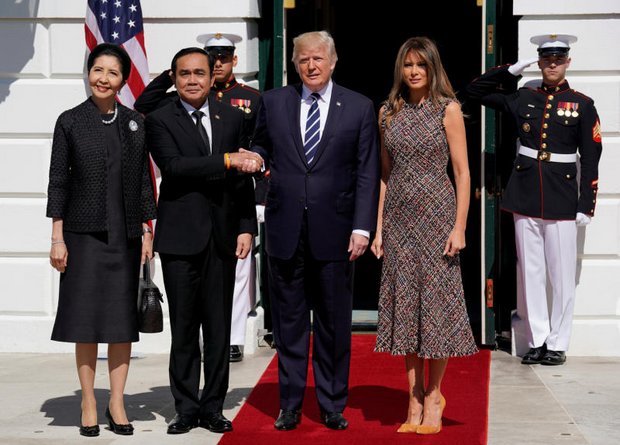 Gen Prayut and wife Naraporn were greeted at the South Portico of the White House by President Trump and First Lady Melania. (Reuters photo)

Perhaps the closest recent comparison to Gen Prayut's visit would be that of former Pakistani army chief Gen Pervez Musharraf, who emerged as a close ally of President George W Bush in the war on terror. Musharraf first visited the White House in 2002, three years after he seized power from an elected leader and before he'd rammed through a national referendum to endorse his presidency.

Mr Trump has barrelled through criticism about outreach to authoritarian foreign leaders as he looks to shore up America's long-standing alliances.

He praised Philippine President Rodrigo Duterte for his deadly war on drugs that has left thousands dead, according a leaked transcript of an April phone call. In the same month, Trump welcomed Egyptian President Abdel-Fattah el-Sissi to the White House - something that Obama avoided. El-Sissi had taken power in a 2013 coup and later was elected president.

"Civil society, human rights and good governance in Thailand are under attack," said T Kumar, Amnesty International USA's advocacy director for Asia. "The military government has restricted freedom of expression and peaceful assembly, creating an environment where people risk arrest and persecution for exercising their basic human rights. If these laws are not repealed, fear and repression could become the new normal in Thailand."

A US National Security Council spokesman, who was not authorised to speak publicly on planning for the visit and requested anonymity, said the US will continue to urge Thailand to return to participatory democracy and restore civil liberties. He declined to say whether those points would be raised by Mr Trump, but said the president could discuss how to strengthen US-Thai relations.

After the coup, the United States stopped military assistance and training programmes. Under Mr Trump, the US has authorised more arms sales. 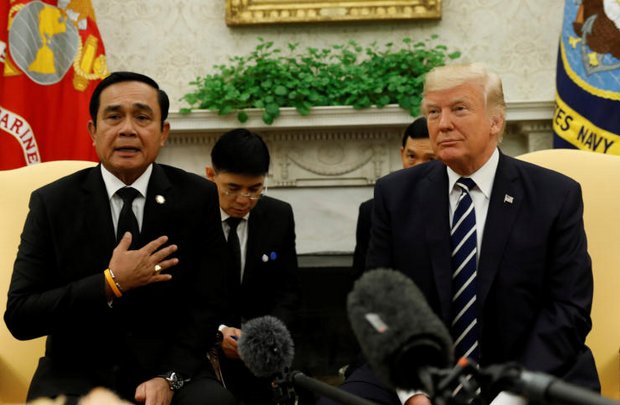 Gen Prayut and President Trump posed for photographers shortly after the Thai party arrived for a working lunch. (Reuters photo)

John Sifton of Human Rights Watch predicted there wouldn't be substantial discussion on human rights on Monday. "Trump praises autocratic leaders the world over with little comment on their abuses," Mr Sifton said.

Walter Lohman at the right-leaning Heritage Foundation said if Mr Trump did raise democracy with Gen Prayut it would be behind the scenes, which he argued would be most effective with a country sensitive to foreign criticism.

"We need to be concerned about human rights and democracy, but it can't dictate our relationships with our allies," Mr Lohman said.