Election now likely in May 2019

The general election is now likely to be held in May 2019 at the latest, according to a new timeline confirmed by the president of the National Legislative Assembly (NLA).

While Pornpetch Wichitcholchai did not spell out the most likely period the election will be held, he said the two remaining organic bills required before the election could be held would take effect by the end of 2018 at the latest "so that the prime minister can announce the election date".

He echoed Gen Prayut Chan-o-cha’s comments on Thursday to Thais in the United States that the organic laws would be completed by the end of 2018. A day earlier, Gen Prayut also said he would next year announce the election date. (continued below) 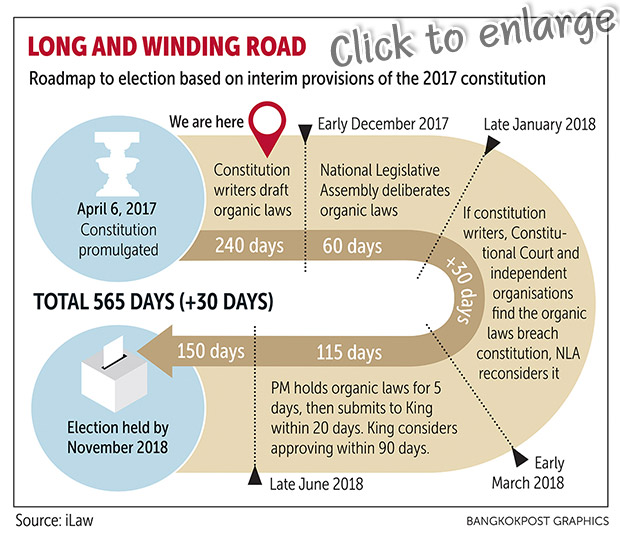 But according to the roadmap based on the 2017 constitution, the general election is to be held in November 2018 at the latest.

It’s unclear why the prime minister and NLA president think it would take almost a year to pass the remaining two organic laws when the NLA is constitutionally given up to 60 days to deliberate them.

The only possible explanation is when the bills are challenged or the NLA rejects them, kickstarting the rewriting process, which the charter does not prescribe the timeframe.

“We intend to complete the procedures involving us as soon as possible. That doesn’t mean we would hastily pass unconstitutional laws that will be rejected later and have to be rewritten,” Mr Pornpetch said.

The 2017 constitution gives constitution writers up to 240 days from April 6 this year, the date the charter was promulgated, to write 10 organic laws.

Four of the 10 organic laws are required to be enacted before the general election can be held. They are those on the Election Commission, political parties, MP elections and sources of senators.

The first two have already been passed by the NLA and are in the process of seeking royal endorsement. The latter two have yet to reach the NLA.

Section 268 of the 2017 constitution provides after the four election-related organic laws take effect, a general election will be held within 150 days.

After receiving the bills, the charter gives the NLA 60 days to consider them. Once they pass the vote, related parties, such as the Election Commission, can challenge them within 10 days in which case a panel of three sides -- the NLA, the constitution writers and the opposing party -- will be set up to reconcile differences within 15 days.

After that, the NLA will vote on the revised versions and if two-thirds vote them down, a new process begins on rewriting the bills.