Chief constitution drafter Meechai Ruchupan insists that the ban on political parties must be lifted because his organic laws are in place. The junta disputes that.

The ban on political parties that has been in effect since shortly after the May 2014 coup could be lifted in a few days, according to Constitution Drafting Committee Chairman Meechai Ruchupan.

Mr Meechai, who is also a member of the National Council for Peace and Order (NCPO), said Monday he believed the body would issue an order to revoke the ban this week so parties could resume their political activities.

The NCPO is scheduled to hold its weekly meeting today, meaning the contentious issue could be discussed immediately prior to the next cabinet meeting.

Yet Mr Meechai conceded that if such an order were to be issued it would most likely come with conditions attached.

"We should wait for an official order [from the NCPO]," he said.

The government has come under increasing pressure to lift the ban after an organic law on political parties took effect on Saturday when it was royally endorsed and published in the Royal Gazette.

The law consists of 152 sections ranging from how parties should be formed to defining the codes of conduct governing their day-to-day running.

He said the ban is tied to peace-keeping and public order but he believed the NCPO was now reviewing the issue.

However, not everyone was singing from the same hymn sheet. 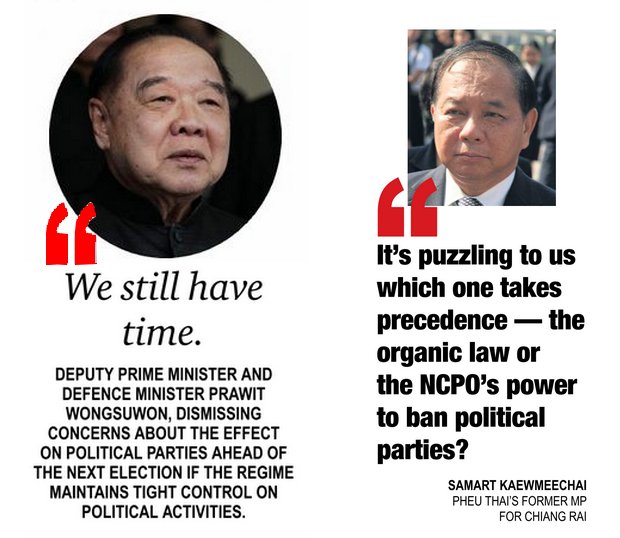 Deputy Prime Minister Prawit Wongsuwon said the ban is likely to stay in place until all of the organic laws have been completed.

Meanwhile, Deputy Prime Minister Wissanu Krea-ngam, amid growing pressure from various parties to reverse the ban, called on politicians to be more patient.

The organic law has stirred debate and unleashed a flurry of demands, particularly from the former ruling Pheu Thai Party, to "unshackle" them as the clock ticks down to the next general election.

The organic law has also introduced two crucial time frames for the parties.

The first says they must review their membership lists within 90 days of the law having been enacted while the second gives them 180 days from last Saturday to establish party branches, appoint representatives and organise party meetings.

Mr Samart said none of this can be achieved while the ban is in place as it prohibits meetings to set policies and issue orders.

"It's puzzling to us which one takes precedence -- the organic law or the NCPO's power to ban political parties?" he said.

Parties are now fretting they will not have enough time to prepare for the upcoming poll, he said, adding Prime Minister Prayut Chan-o-cha should have anticipated such problems when he presented the organic law for royal endorsement.

Amnuay Khlangpha, who works with Mr Samart, said retaining the ban increases the likelihood of the election being postponed.

"Unless the ban is lifted soon the roadmap will be delayed. And who will be held responsible? The political parties or the NCPO?" Mr Amnuay said.

A source in the Pheu Thai Party said parties that plan to contest the election face a number of challenges under the new organic law which has revised the rules pertaining to memberships and membership fees.

Parties are now required to have a start-up fund of at least 1 million baht, with co-founders contributing between 1,000 baht and 50,000 baht each. Party members must pay 100 baht each to join.

These rules contradict the traditional practice of paying new members' travel expenses and giving them jackets as a token of appreciation, the source said, adding that the parties need time to adjust.

"It's all well and good in principle, but the conditions are hard to meet," the person said.

However, the fact that the law was promulgated should be taken as a good sign because it indicates the will exists to hold the elections on time late next year or in early 2019 at the latest, the source added.

Smaller parties have also joined the chorus calling to lift the ban.

Peuk Lertwangpong, leader of the Thai Rubber Party, said preparations must begin now if parties are expected to be ready in time for the roadmap.

He said the charter and organic laws impose new rules and regulations that could cause "complications" for parties.

"If the NCPO doesn't give them enough time, other problems may arise that cause further election delays," he said. "If the government is concerned about some people inciting chaos, it should deal with such issues promptly."

Krit-anong Suwanwong, leader of the Phalang Khrua Khai Prachachon Party, said the NCPO may not revoke the ban outright but start with baby steps such as allowing parties to express their opinions in public.

She said parties registered with the Election Commission should announce a political statement as a preliminary measure.