A mourner attends a merit-making ceremony to mark the 44th anniversary of the Oct 14, 2016 student uprising at the Oct 14, 1973 Memorial site on Ratchadamnoen Avenue. (Photo by Chanat Katanyu)

The late King Bhumibol Adulyadej's role in solving the political crisis during the popular uprising of Oct 14, 1973, was extolled at a seminar on Saturday. 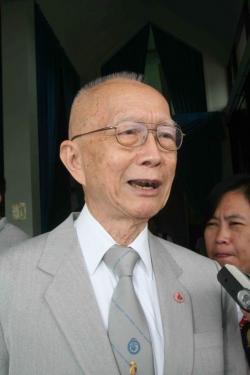 Vasit: King Bhumibol did not sleep for seven days

The seminar was held at the October 14 Memorial's conference room near Kok Wua intersection on Ratchadamnoen Avenue to commemorate the 44th anniversary of the uprising.

During the seminar, Pol Gen Vasit Dejkunjorn, former head of the Office of Royal Court Security Police who closely served the late monarch, recounted how worried King Bhumibol was during the crisis.

He was concerned for the safety of the people and students who took part in the anti-government demonstrations, and he did not sleep for seven straight days as the situation worsened leading up to Oct 14 when government forces clashed with demonstrators, according to Pol Gen Vasit.

When things turned violent, King Bhumibol ordered the gates of Chitralada Palace to be opened to allow demonstrators into the palace grounds. Along with members of the royal family, he then personally met with the demonstrators, Pol Gen Vasit said.

On the evening of Oct 14, King Bhumibol appeared on national television urging an end to the violence, and announced that the military government of Field Marshal Thanom Kittikachorn had resigned and that he had appointed privy councillor Sanya Dharmasakti as the new prime minister.

Calm returned to Bangkok when Field Marshal Thanom and his associates fled the country the following day.

"People who watched television that evening realised that King Rama IX looked sombre as never before due to seven days of no sleep and concern for the people," Pol Gen Vasit said.

Meanwhile, Prime Minister's Office Minister Ormsin Chivapruck on Saturday laid a wreath at the October 14 Memorial on behalf of the government.

A multi-religious ceremony was held in commemoration of those who died in the uprising. Also present were representatives of political parties, the National Human Rights Commission and the civil sector.

Mr Ormsin said that Oct 14 marks a historic event dedicated to the memory of the people who fought for democracy.

He also said that the government is determined to restore national unity and solve conflict through peaceful means.

Relatives of those who died in the uprising also thanked the government for approving compensation. Each family will receive a monthly payment of 3,000 baht, starting at the end of this month.