Newspapers on Wednesday mostly had the "Zuckerberg vist" on front pages, but hours later the Facebook office in Bangkok said there is no such meeting on the books.

Prime Minister Prayut Chan-o-cha's hopes of meeting Facebook chief executive officer Mark Zuckerberg look to have hit the rocks as a Facebook spokesman said no such plans are on the drawing board.

"There are no plans currently for any of our senior leaders to visit Thailand," according to the statement by a Facebook spokesman released Wednesday.

The government has yet to respond to the denial.

On Tuesday, Gen Prayut told the media Mr Zuckerberg will visit Thailand on a business trip and he had asked to meet Gen Prayut to discuss cooperation in solving the problem of transnational crimes, and what kind of measures should be in place.

Deputy Prime Minister Somkid Jatusripitak, who is in charge of economic affairs, also confirmed to the media on Monday the Facebook co-founder would visit Thailand.

Gen Prayut laid out the agenda of the supposed meeting in some detail on Tuesday.

"Mark Zuckerberg will come to Thailand on a business trip", he said. 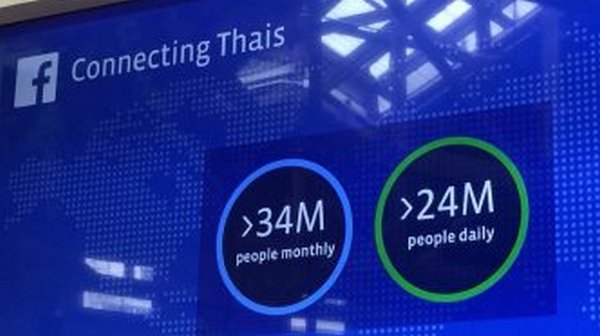 Facebook has an enormous Thai participation - more than 90% of all internet users. A Facebook electronic poster, displayed when the company opened its Bangkok office in 2015.

Mr Zuckerberg visited Thailand in 2010 to attend the wedding of a friend, Facebook vice-president Chris Cox.

Thailand is the third greatest consumer of Facebook, with an estimated 47 million users, according to several internet monitors.

"Mr Zuckerberg asked to meet me to discuss cooperation in preventing and solving the problems of transnational crimes, and what kind of measures and plans should be in place," he said.

"Please do not link this meeting to other issues. It is just an exchange of opinions. It's better than no communication at all," he told the media.

Mr Somkid said the meeting announced by the prime minister would provide a chance to ask him to block posts and videos deemed to be in violation of the lese majeste laws. Facebook has refused to remove or block most such posts.

The last time any government official met with Mr Zuckerberg was 11 months ago, when Deputy Prime Minister Prajin Juntong met with the Facebook founder at the Asia Pacific Economic Cooperation (Apec) Summit in Peru.

That brief meeting had no newsworthy outcome.

Facebook and the government have clashed over the refusal of the social-media leader to remove or block dozens of allegedly defamatory posts on their site, many of which are accused of violating the lese majeste law.

For several years, Facebook has repeated its policy on blocking or removing posts, or identifying account users. In short, Facebook will not address any such government requests until there is a specific court order.

"We have never provided account information or content of any Facebook user to the government of Thailand, nor do we proactively monitor people's content or conversations for potential violations of local law," the US-based company said.

"Our policies and process for government requests have not changed, and are consistent for governments around the world. Our meeting with the Thai government was to outline this process."

Dine-in restaurants will be allowed to remain open until 11pm and alcohol can be served in all provinces except Samut Sakhon.