Map from the Freedom House report shows the regional situation of internet freedom.

Thailand has been branded "not free" for internet freedom for the fourth consecutive year in the latest Freedom on the Net report.

This year's report was released by Freedom House, a US-based independent watchdog organisation.

The report, which measures countries which manipulate social media and undermine democracy, gave Thailand an overall score of 67. The scores range from 0 to 100. The zero score means the most freedom while 100 is the least.

The score is based on three main factors: Obstacles to access, limits to content and violations of user rights.

Of the 65 countries assessed in their research, "32 countries have been on an overall decline since June 2016" with Thailand close to the bottom of the rankings. 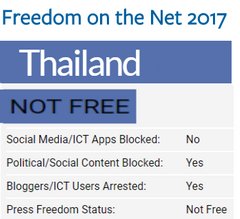 China has once again been ranked the worst, for the third consecutive year.

According to Freedom House, statistics have shown that the severity of freedom on the internet in Thailand has been on a steady decline only since the military took power in 2014. In 2013, Thailand was assessed in the "partly free" grouping.

The Freedom House report pointed out that several key events has resulted in this decline, most notably from the new adjustments to the Computer Crime Act (CCA).

For instance, new amendments undermined internet freedom which gave way to increased surveillance with murky jurisdictions, while increasing the level of censorship on all types of media.

Thailand was also listed as one of six countries that implemented laws which offers "so-called backdoor access to confidential communications".

New constitutional drafts also made the military's emergency powers officially legitimate which further acts as an iron fist to allow private conversations to be monitored without the need for warrants.

When asked about the report, government representatives declined to comment.

Thai Journalists Association president, Pramed Lekpetch, said the results follow rigid enforcement of security laws, including Section 116 of the Criminal Code to suppress what the authorities see as sedition.

"This confusion sometimes mislabels many social outcries as an act which affects national stability, and that's definitely not always the case," he said.

This current year has proven to be one full of mounting threats both within the cyber world and within Thai borders, he said.

"It's not surprising that our rating is currently at its worst throughout the military leadership," he added.