Prime Minister Prayut Chan-o-cha began his two-day mobile cabinet meeting in the South at a Pattani school and its goat farmers. (Reuters photo)

Prime Minister Prayut Chan-o-cha has insisted that his first mobile cabinet trip to the far South this week is not politically motivated, but is to discuss various high-value infrastructure projects.

Gen Prayut said his visit to Pattani, one of the restive southern provinces, and Songkhla is aimed at boosting public understanding of the government's policies, not to try and court local political support.

He stressed the importance of the three southern border provinces and four districts in Songkhla, adding security in the insurgency-plagued region has improved and that an economic drive will ensue.

According to the premier, the mobile cabinet meeting will touch on investments in various infrastructure projects under a substantial budget.

The premier was greeted by more than 2,000 people at the Livestock Central Market for the Southern Border Provinces in tambon Bang Kao of Nong Chik district, where he presided over a ceremony to officially launch the facility. 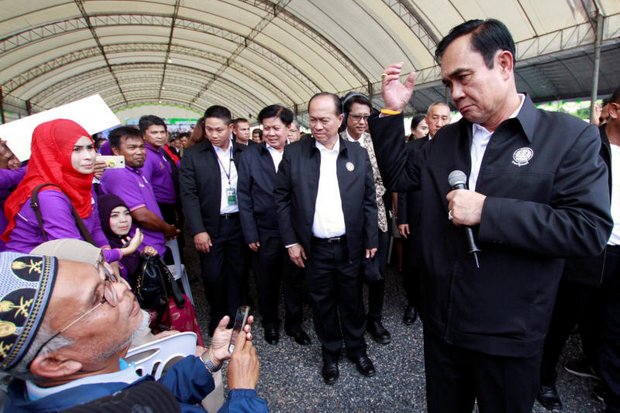 The prime minister addressed deep South residents at a large forum, but also moved among the greeters at this school in Pattani. (Reuters photo)

Pattani Governor Weeranan Pengchan said the 34-million-baht facility would help spur economic development in the area and nearby locations.

Referring to efforts to combat falling rubber prices, Gen Prayut said he had instructed officials to check the amount of rubber kept in the state stockpile, adding he will find ways to ramp up the domestic use of rubber.

Speaking about security, the premier asked locals to work against those attempting to cause division in the region. The country has diverse cultures and religions and all people need to live together happily, he said.

"Only a small group of people in the South have caused trouble and the majority must ensure this group does not succeed," said Gen Prayut, who also revealed praise from leaders of Muslim countries over the administration's approach to the troubles.

He insisted alleviation measures for those affected by the unrest must be provided. Soldiers, police officers and civilians, as well as insurgents who are hurt or killed in the violence, are entitled to assistance in accordance with the principles of human rights.

Gen Prayut also urged the local administrative organisations not to merely focus on elections, but to concentrate on assisting the residents and moving the government's initiatives forward.

Meanwhile, 16 people, including four leaders, of the 500 people who protested against the coal power plant project in Songkhla's Thepha district were arrested Monday after their rally resulted in three injuries during a clash with police. 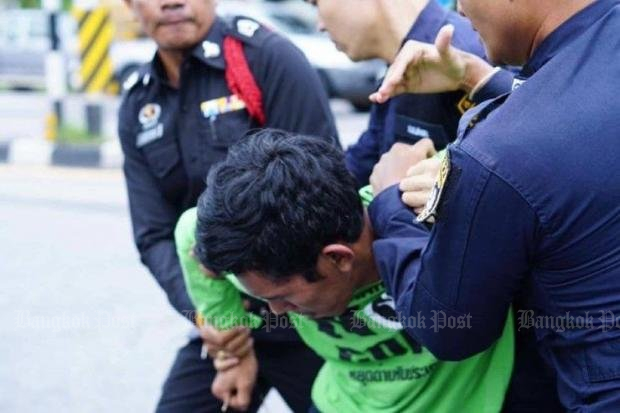 Nevertheless, the chambers of commerce in 14 southern provinces have agreed to propose 14 infrastructure projects worth 500 billion baht to the government.

Kawispong Sirithananonsakul, chairman of the Songkhla Chamber of Commerce, said the five-year investment projects, starting from 2019, were scheduled to be presented Monday at the joint meeting between the prime minister, cabinet members, 14 southern provincial governors, local administrative officers and representatives from the private sector.

The projects include a motorway stretching from Chalung industrial estate in Hat Yai district to Padang Besar in Sadao district and to Dannok in the same district, the widening of Phet Kasem Road from two to four lanes between Ranong and Phangnga, and the extension of the road from Satun to Malaysia's Perlis state.

Rail initiatives involve a double-track railway between Chumphon and Songkhla's Hat Yai district and another from Narathiwat, Sungai Kolok to Hat Yai, as well as a rail route for tourism between Surat Thani and Phangnga.

Maintenance of the port in Songkhla and development of a second deep-sea port in the province will also be tabled.

In Trang and Ranong, proposals touch on dredging navigation routes at their ports while cruise ship ports are also requested for Krabi and Surat Thani.

On the aviation front, new airports are proposed for Phangnga and Yala, while the expansion of runways and a passenger terminal is proposed in Narathiwat province.