'Watch is a friend's, ring from his mother'

At a Government House photo shoot on Dec 4 to present the Prayut 5 cabinet, reporters noted the costly bling on the right wrist and hand of Deputy Prime Minister and Defence Minister Prawit Wongsuwon. Now he is to report to the National Anti-Corruption Commission (NACC). (Photo by Chanat Katanyu)

Deputy Prime Minister Prawit Wongsuwon will submit an explanation on his luxury watch and diamond ring to the National Anti-Corruption Commission Tuesday, a source close to Gen Prawit said.

Meanwhile, an unconfirmed report suggests Gen Prayut may claim he inherited the diamond ring from his mother and the luxury watch belonged to a businessman friend who had lent it to him to wear.

The source said Gen Prawit had received a letter from the NACC asking him to explain within 30 days how the assets were acquired.

Gen Prawit was given a choice of writing to explain to the NACC or handing a letter to the agency in person.

Gen Prawit, who also serves as defence minister, chose to write to the NACC, but his letter remained with the Office of the Minister of Defence due to the three-day holiday period extending to Monday.

The letter is expected to be submitted to the NACC Tuesday, the source said.

Asked about reports that Gen Prawit inherited the ring and the luxury watch belonged to a friend, Gen Prawit's aide did not deny the matter, saying only Gen Prawit would explain himself to the NACC.

Gen Prawit's luxury trinkets have caught the attention of the NACC after suspicions emerged he failed to report them in his declaration of assets and liabilities as required by the anti-graft agency.

The Richard Mille watch and diamond ring came under the media spotlight when Gen Prawit raised his right hand on which he wore the items to shield his face from the sun during a group photo session for the new cabinet on Monday.

The pictures then went viral amid questions about whether he had declared the expensive assets after they were found not to be included in his previous declarations.

The value of the watch remains unclear. A Facebook page called CSI LA, popular for its investigative reports, said the watch was likely to be the RM 002V2 model worth US$370,000, or about 12 million baht.

But some watch experts believe it could be the RM 010 model priced at more than three million baht.

Gen Prawit's diamond ring was said to be worth about 4 million baht or more.

Gen Prawit's total salary and position allowance as deputy prime minister is about 110,000 baht while the highest salary of a four-star army general is about 76,000 baht.

Gen Prawit retired from military service in 2005 and then entered politics by joining the Abhisit administration.

Pheu Thai Party acting leader Pol Lt Gen Viroj Pao-in on Sunday urged the NACC to handle the case involving Gen Prawit with the same standards it has applied to other politicians.

Mr Ong-art referred to an event to mark International Anti-Corruption Day on Saturday in which the premier urged all sectors of Thai society not to tolerate corruption and said he expects the country's position on the corruption perception index to improve this year.

The Democrat said the prime minister must also ensure that those in government are not involved in corruption if his anti-graft efforts are to succeed.

During the more than three years in office, the prime minister has managed to remain untainted by corruption scandals, but some others in the government have often been marred by accusations of graft, which has hurt the government's overall credibility, Mr Ong-art said.

''The prime minister should be strict with those in the government, particularly the group which has the status of the prime minister's brothers and friends,'' Mr Ong-art said.

''They are often accused of being involved in irregularities. If the prime minister gets tough and stops them from getting involved in graft, this will help improve the government's image as well as the corruption perception index, Mr Ong-art said.

Meanwhile, the Super Poll research centre showed 61.7% of respondents were confident in Gen Prayut's integrity. The poll was conducted between Dec 1-9.

This suggested a drop in public confidence compared to an opinion survey conducted by Suan Dusit Poll on Oct 9, last year, which showed that 74.3% believed in Gen Prayut's honesty. 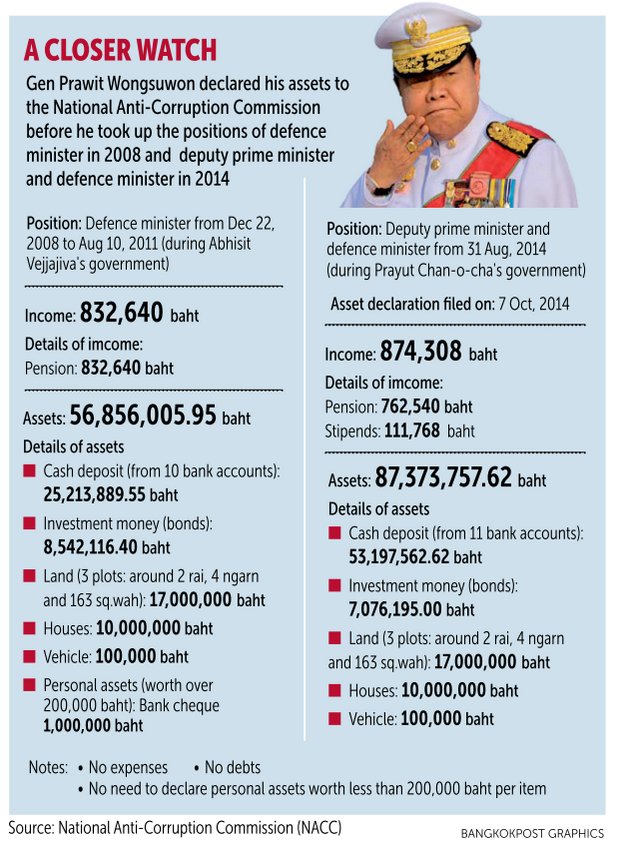