NLA at odds on snooping plan

The National Legislative Assembly (NLA) could not agree Thursday on whether to allow the National Anti-Corruption Commission (NACC) to conduct eavesdropping and wire-tapping during investigations.

After over six hours of debate, the NLA meeting deliberating the anti-graft organic law was adjourned. NLA chairman Pornpetch Wichitcholchai told legislators he decided to call for the deliberations to be halted. It will resume again Friday morning.

Supporters, comprising the majority of the 35-member committee which earlier scrutinised the bill, insisted the NACC needed the power to intercept the information.

However, many members of the minority on the panel still wanted to speak about the disadvantages of the move.

Thursday was the first day of the NLA's second-reading deliberations of the anti-graft organic law. While the bill contains 193 sections, the legislators spent all their time on the eavesdropping plan. The NACC members, who back the change, proposed it be added as Section 37/1 of the bill granting the agency the power to intercept communication in cases where there are enough grounds to believe a suspect has committed wrongdoing.

It also proposed Section 37/2 allowing investigators to wear disguises and Section 37/3allowing shadowing or tracking of suspects during the NACC's investigation.

This anti-corruption law is the eighth of 10 organic laws required by the 2017 constitution to be drafted by the Constitution Drafting Committee (CDC), after the charter was promulgated on April 6.

The other two organic bills still to come are the laws on the election of MPs and the selection of senators. An MP election must be held within 150 days of these two laws being passed.

It was NLA member Somchai Swangkarn who said the legislators needed more time to think over this section, as they would have to be accountable. His suggestion led to the meeting break.

Almost a dozen speakers  said Thursday that they opposed the proposal. 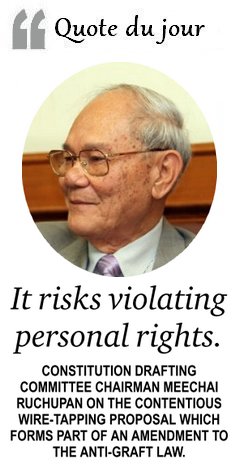 Only NACC chairman Watcharapol Prasarnrajkit, one of the sponsors of the idea, and chairman of the scrutiny committee Chatchawal Suksomjit, defended it, as NLA members from the military stayed silent during Thursday's proceedings.

Pol Gen Watcharapol said his group did not mean to violate people's rights, and using the word "wiretap" has negative connotations.

"We will need approval from all nine NACC commissioners. Then the NACC will have to submit the proposal to a chief justice in the Criminal Court for corruption and misconduct cases, not just any judge," he said.

"Moreover, the cases eligible for eavesdropping must be important enough and have a wide impact. Then when the chief justice approves such a move, the NACC will only have 90 days to exercise the power according to this section," he said.

Meanwhile, former NACC member Vicha Mahakhun warned that if the agency tries to take on too much power, it could end up destroying itself.

"If the NACC is a trusted agency, information will just flow in," he said.

CDC member Pattara Khumphitak said claiming that the United Nations Convention against Corruption was a guideline for the move was too broad. More conditions and examination of the details were needed to ensure transparency.

NLA member Tuang Untachai said private information retrieved by the Department of Special Investigation (DSI) in the past had been used by politicians against their opponents.

CDC chairman Meechai Ruchupan argued that authorising the NACC to wiretap people will do more harm than good as it could breach the charter's protections of personal rights.

Even though the NACC will require approval from the court for it to wiretap anyone, the court will be supplied with information solely from the NACC, he said.

If the court approves its request, it will have that authority for up to 90 days to access personal information of many people, perhaps even 100 people thought to be involved in a possible crime, even if the wiretapping or email scanning leads to the arrest of only a single suspected culprit, said Mr Meechai.

"It might be fun for those granted this type of authority, but for those whose personal rights are violated, they won't be amused," he said.

Mr Meechai said this spying authority will not overlap with the authority of the DSI, as suggested by some critics.

But if all these state agencies have an ability to spy on people, the public will find it more difficult to live under these circumstances, said Mr Meechai.

The CDC could not say at this point whether a tripartite committee will be set up to deal with the matter.