The latest luxury watch spotted on the wrist of Deputy Prime Minister Prawit Wongsuwon has been identified on social media.

The CSI LA Facebook page posted a photo Tuesday showing Gen Prawit wearing the watch and singled it out as a Patek Philippe 5135R Calendario Annual Calendar worth about 1.5 million baht.

The photo is said to have been taken on March 22, 2016 when Gen Prawit performed merit making in Mae Rim district of Chiang Mai.

It is the 18th luxury timepiece seen being worn by Gen Prawit. 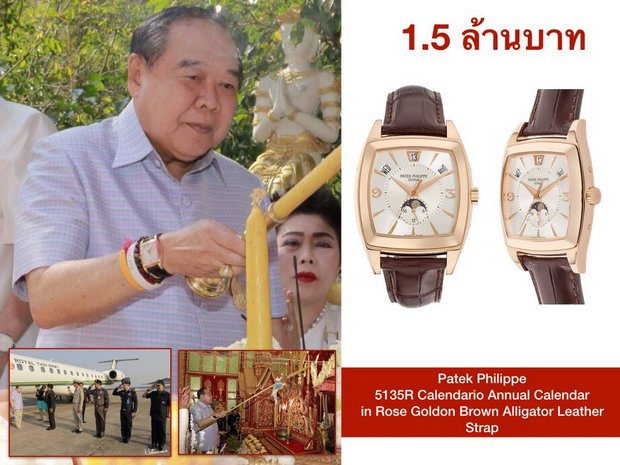 None of these luxury watches were included in Gen Prawit's assets declaration submitted to the National Anti-Corruption Commission (NACC).

The NACC is now investigating the scandal and its president Watcharapol Prasarnrajkit has said if more watches have been found, the NACC might have to take more time to collect evidence.

Meanwhile, political activist Ekachai Hongkangwan arrived at the government complaint centre on Tuesday to present his own watch to Gen Prawit as a "gift", arguing that the deputy prime minister should not have to "borrow" other people's watches and should have one of his own.

Mr Ekachai claimed his watch is a 10-year-old Seiko and was a "suitable gift", since "watches don't have to be extravagant, so long as they can tell time". 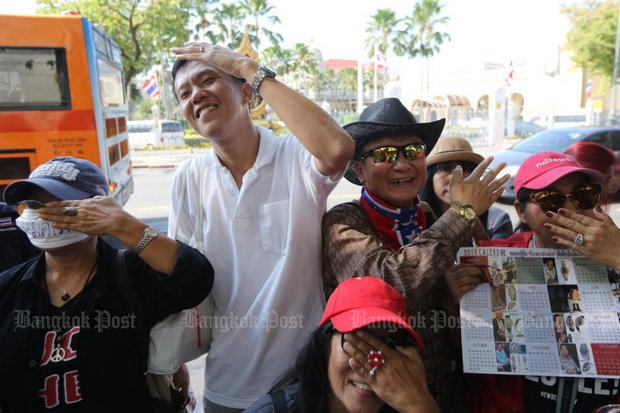 We're watching: A group of activists mimic the infamous photo of Deputy Prime Minister Prawit Wongsuwon caught showing off expensive jewellery, and now embroiled in a scandal over how he obtained his extensive collection of at least 18 luxury watches. (Photo by Wichan Charoenkiatpakul)

Authorities including the commander of the Armed Forces Security Centre Lt Gen Thanakiat Chobchuenchom reportedly offered to take it on his behalf, but Mr Ekachai refused to give the watch to anyone other than Gen Prawit himself.

"I am aware that Government House and the Defence Ministry will be holding Children's Day activities this Saturday. So I will be there to give the watch to him myself," he said.

Around 10 supporters of Mr Ekachai's move to present the watch were seen handing out calendars with pictures of Gen Prawit wearing luxury wristwatches.

"The National Council for Peace and Order's time is up," said Mr Ekachai. "The government has said it will not stay for an extended period of time, but there has been no clear sign that an election will happen any time this year."