Scheme to have Prayut return as non-elected PM

Powerful Minister of Defence and Deputy Prime Minister Prawit Wongsuwon is the first and heaviest hitter to voice public support for the military to form and back a political party. (Photo combo via Twitter/@wassanananuam)

Deputy Prime Minister Prawit Wongsuwon has thrown his support behind a plan to set up a political party to back Prime Minister Prayut Chan-o-cha to return as a non-elected prime minister after the general election expected late this year.

On Monday, former senator Paiboon Nititawan announced his intention to form his own party on March 1 and openly pledged his support for Gen Prayut to resume his premiership after the election. The People's Reform Party is the new party's tentative name.

However, Mr Paiboon said Gen Prayut must remain politically neutral by refraining from subscribing to any party or being on any party list in the election.

The move comes after Gen Prayut last Wednesday declared openly for the first time that he is no longer a soldier and is now a politician, fuelling speculation that politicking is at play to pave the way for him to resume his premiership after the poll.

Responding to the speculation over the new party, Gen Prawit said: "I agree if the people agree. The people will give an answer. For me, I am insignificant so I cannot answer if the prime minister will be able to become prime minister again. It is up to the people."

Asked if he will continue to help if Gen Prayut returns as prime minister after the election, Gen Prawit said that it was "too early to discuss the matter".

Gen Prawit's enthusiasm for Gen Prayut to return as prime minister comes despite Privy Council president Prem Tinsulanonda warning late last month that Gen Prayut had lost much of his support base.

Mr Paiboon told the Bangkok Post on Thursday that in his view, Gen Prayut will likely gain more than half the vote in parliament, or 375 out of 750 votes from 500 MPs and 250 senators to become an outsider prime minister. 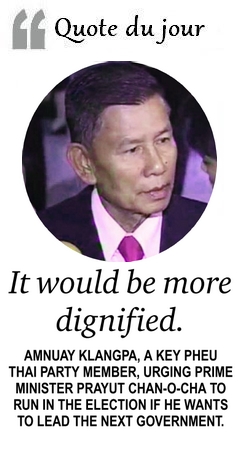 Many political pundits agree it would be extremely difficult for an outsider premier to gain power via this route, but Mr Paiboon claimed other candidates might be seen as divisive.

He said that even though major parties will nominate their party leaders for the premiership, they are unlikely to receive 375 votes in favour. He was convinced that some MPs will realise that if they let parties' candidates assume the premiership during this transition period, there will be a repeat of the political mess that led to the 2014 coup.

"In light of this, my party will not nominate any prime ministerial candidates ... because we have declared from the beginning that we will only support Gen Prayut. I believe there are members of other parties who agree with us and will not support any party leaders. And they will certainly deny them the 375 votes needed," Mr Paiboon said.

Under the constitution, Gen Prayut could resume his premiership after the next general election if he is chosen as an outsider prime minister by parliament after the polls. If MPs fail to select a new premier from candidates nominated by party lists, a provisional clause under Section 272 of the charter would trigger the alternative route.

In such a situation, senators can join MPs in proposing a motion to suspend the rule requiring prime ministerial candidates to come from party lists, paving the way for an outsider prime minister to be selected.

Such a motion requires the support of at least two-thirds of both MPs and senators, or 500 of them, to suspend the rule.

Mr Paiboon said that while he had not been satisfied with the work of the National Council for Peace and order (NCPO), he believed the NCPO will pay more heed to the voices of the people after the election as the regime will have to work with elected MPs.

Post-poll politics will see the emergence of a coalition government and an alliance between Gen Prayut and political parties in running the country will contribute to political stability and credibility, which is a necessity during the political transition, Mr Paiboon said. "If political power is placed solely in the hands of political parties, the people's fight in the past will go to waste," he said.

He strongly denied being a nominee of Gen Prayut. "I don't owe a debt [of gratitude] to him," Mr Paiboon said. "It's him who owes me a debt because I join other people to support him without seeking any benefit."

Speaking on his readiness to set up a new party, Mr Paiboon said he has now enlisted about 600 people from every region to support his bid to establish one. Another 400 is needed to meet legal requirements to set up the party by March 31.

Each founding member will be asked to contribute 1,000 baht for an initial fund for the establishment of a party which will come to 1 million baht as required by law, he said.

Amnuay Klangpa, a key Pheu Thai Party member, said Thursday that now that Gen Prayut has declared he is now a politician, he should allow himself to be nominated by parties which want to support him.

This way it will be more dignified than waiting to become an outsider prime minister and he will "gain recognition from the international community", Mr Amnuay said.