This is despite the fact he is starting to sound and act more like one of late, according to pundits who claim they have reason to believe people could be seeing more of him after the election tentatively set for November. 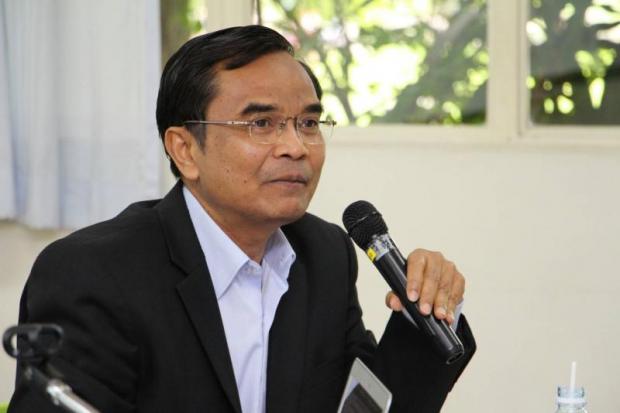 Events in recent weeks could reinforce the likelihood of Gen Prayut being the nation's prime minister post-election. If he harbours any further political ambitions, surely other politicians would be the ones to know.

A photo of the premier in the company of Nakhon Pathom's best-known political scions, the Sasomsap brothers, was circulated recently on social media.

Pheu Thai core member Watana Muangsook jumped at the chance to capitalise on this, suggesting Gen Prayut was courting small parties and building alliances which would come in handy in case a non-MP, outsider prime minister is needed to fill a leadership vacuum in the next government.

But Gen Prayut brushed aside rumours he is taking up a politically enterprising role to secure top spot in the next government, saying he met the Nakhon Pathom politicians by chance and that they asked for a snap together.

He added that if he had intended to forge any alliance, he would not have paraded it for the world to see.

This week, many eyes were fixed on the announcement by former senator Paiboon Nititawan that he plans to register a political party in March. He has always been a vocal and staunch supporter of Gen Prayut.

His announcement was peppered with what some analysts thought was a taste of things to come.

Mr Paiboon spoke unreservedly of his desire for Gen Prayut to return as an outsider prime minister.

He predicted MPs of small- and medium-sized parties, together with appointed senators, could band together and nominate Gen Prayut -- a move that would leave the two largest parties, the Pheu Thai and the Democrats, out in the cold.

The observer said that although the two parties face the threat of being pushed to the opposition benches after the next poll, that is not to say they are prepared to bury the hatchet and fight a common enemy.

While some Pheu Thai members trumpeted a call for political parties to unite in their resistance against an outsider premier, the Democrats were not so thrilled at the idea.

Former Democrat MP Nipit Intarasombat said no election was being held anytime soon, despite assurances from the regime, and so it would be premature to even flirt with the idea of mounting resistance against an outsider prime minister.

Mr Nipit was posing as a mind reader, according to observers. He presented his own analysis of what Gen Prayut may be planning and what lies in store for him.

Mr Nipit believes it would be unwise and overly hasty for Gen Prayut to make it known at this point any wish to return as prime minister.

He said Gen Prayut was astute enough to not consent to being named by any party as its candidate for the role.

A more plausible choice would be for him to wait until after the election to make a move.

When parties that win seats exhaust their lists of candidates in a futile vote to pick a premier in the House of Representatives, the MPs and 250 senators will meet and go in for the kill by pushing their envelopes -- possibly with Gen Prayut's name put forward, pundits say.

Back to haunt the regime

Photos of fugitive former prime minister Yingluck Shinawatra turned up on social media around the turn of the year but it was rock singer Seksan "Sek Loso" Sookpimay who stole the show by firing a gun in the air and then engaging in noisy bouts with law enforcement. 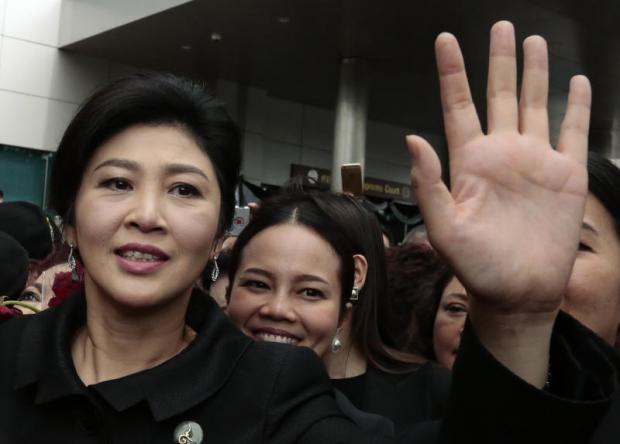 Yingluck's snapshots found their way back into the spotlight days later with the Office of the Attorney-General and police rushing to say they were doing all they could to bring her back to Thailand to face justice.

These photos marked her first known appearances in public since she vanished last year ahead of an Aug 25 ruling by the Supreme Court's Criminal Division for Holders of Political Positions in a criminal negligence case related to her administration's rice-pledging scheme.

Yingluck's possible whereabouts have been the subject of heavy speculation until now.

Foreign Minister Don Pramudwinai confirmed this week the ex-premier has been in London since September and she may be carrying the passport of another country because all of her Thai passports have either been revoked or have expired.

The first of the two photos in question features a woman resembling Yingluck. It was reported to have been taken on Dec 26 at the Westfield Shopping Centre in West London.

The second shows the ex-premier having her photo taken with a Thai woman, in a location believed to be outside Harrods in London during the New Year period.

The release of the photos is said to have "surprised" the National Council for Peace and Order (NCPO) which is set to find out the motive of the source who released them.

Top officials were not prepared to believe the sharing of the photos was just a sheer coincidence, according to a government insider.

It has also been reported that Yingluck's Westfield Shopping Centre photo was first broadcast by a television station known to be aligned to the military regime.

According to political observers, those photos are likely to harm the regime more than the fugitive ex-premier.

For some time now Yingluck's absence and low profile have been advantageous to the regime, according to observers. This was also the case with older brother Thaksin, who has been living in self-imposed exile to avoid a 2008 prison sentence for abuse of power.

Some critics say his absence and silence was convenient for the government as at least he was not making noise and stirring up trouble.

However, since the Yingluck pictures surfaced, the dormant issue of how she managed to escape and flee the country has been reawakened. When she disappeared, the regime was accused of turning a blind eye and letting her quietly slip away.

There were even accusations that a secret deal was negotiated in which she was allowed to leave in exchange for keeping a low profile overseas and not rekindling political and social tensions back home.

Some reports also claim that key NCPO figures have ordered an investigation to determine the source of the photos and figure out whether they came out to rally supporters of the Shinawatra clan and whip up political undercurrents.

Suspicions are also growing the photos were distributed with an ulterior motive, after some foreign media outlets ran reports claiming Yingluck is now seeking asylum in the United Kingdom.

According to observers, Yingluck's alleged request for asylum may turn out to be a pressing issue for the government, which has maintained the negligence case against her is a criminal rather than a political one.

However, now that she has apparently resurfaced, and the more often she turns up -- even just on social media -- the regime will face growing pressure to proceed vigorously with her extradition.

As long as her status remains obscure and uncertain, no political harm will probably be done to the government. But if she lodges an asylum request, and sees this granted, it is likely to have far-reaching diplomatic ramifications for Thailand's relationship with the country that welcomes her with open arms.

Former senator Rosana Tositrakul has urged the National Anti-Corruption Commission (NACC) to live up to its name by stepping up efforts to investigate the scandal involving luxury watches worn by Deputy Prime Minister Prawit Wongsuwon. 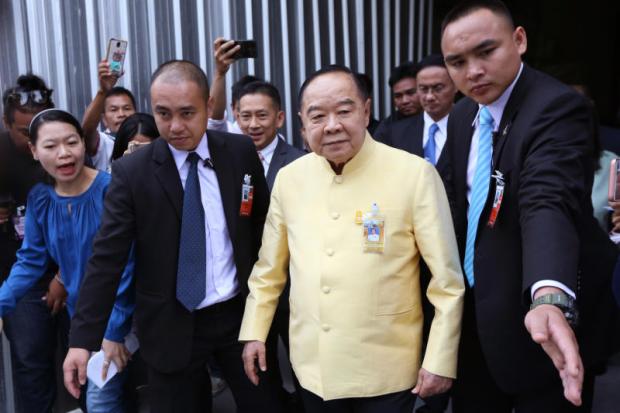 Ms Rosana posted on Facebook on Thursday that while the anti-graft agency has preached the virtues of a fight against graft with its "zero tolerance against corruption" slogan, it appears to be slow in its probe into the fiasco surrounding Gen Prawit.

Ms Rosana, also a core member of the People's Alliance for Energy Reform, praised the CSI LA Facebook Page for being more efficient in digging up information on the luxury watches and exposing it to the public than the NACC.

On Wednesday, the Facebook page posted a photo of Gen Prawit wearing yet another luxury watch and identified it as a Rolex Daytona 116518 Blue Arabic Dial, also known as a Paul Newman Dial, worth about 640,000 baht.

The photo is said to have been taken on Oct 30, 2016 when Gen Prawit presided over a bell-installation ceremony at a temple in Pla Pak district of Nakhon Panom.

It is the 19th luxury timepiece seen worn by Gen Prawit, according to the CSI LA Facebook Page, which also said that the total estimated value of the 19 luxury watches now comes to 29.6 million baht.

None of these luxury watches were included in Gen Prawit's assets declaration submitted to the NACC.

The NACC is now investigating and its president Watcharapol Prasarnrajkit has said if more watches have been found, the commission might have to take more time to collect evidence.

Ms Rosana also urged the NACC to ask Gen Prawit to hand over the watches to the Customs Department so it can check who their owners were and if they were properly taxed.

She said these watches have serial numbers which can help identify the people who purchased them and show if due taxes were paid. This should not be hard to check because there are only a few such expensive luxury watches in the country, she said.

If the NACC refuses to take action, the Customs Department should proceed on its own as it did in cases involving actresses posting photos of expensive brand name bags they bought overseas on their Instagram accounts.

If the luxury watches are probed by going through the tax records, the truth may be found as to whether Gen Prawit bought or borrowed them, Ms Rosana said.

If the NACC wants to preserve its reputation as an anti-graft agency, it must take more vigorous action to live up to its zero tolerance slogan.

"The NACC must not just preach to others; it must exercise its authority to live up to its reputation as an anti-graft organisation. Otherwise, people will see your organisation as a waste of their tax money," Ms Rosana said.

The possible partnership deals between state-run National Telecom (NT) and the two major private telecom operators have definitely been scrapped.

The prime minister has asked the Transport Ministry to quickly organise hearings to gauge the public's opinion on the commercial development of the Hua Lamphong station.