Says all 24 watches 'belong to friends'

The 23rd and 24th watches found by internet sleuths including the CSI-LA Facebook page are worth a total retail price of more than 30 million baht.

Deputy Prime Minister Prawit Wongsuwon claimed Tuesday that "all" 24 luxury watches belong to his friends, and said he will resign from the cabinet only if the national graft-busting agency decides there are sufficient grounds to pursue a case against him.

The nation's No.2 politician has for weeks been embroiled in a scandal over how he obtained so many expensive timepieces, and other jewellery, on the salary of a military man, and why he failed to include them in his declared assets.

The National Anti-Corruption Commission (NACC) has been looking into the case but critics claim the agency has been deliberately stalling in finding answers.

Tuesday's outburst by Gen Prawit marks the first time he has clarified where the watches came from after a group of perceived "super sleuths" who contribute to the CSI LA Facebook account, which is hugely popular in Thailand, claim to have spotted 24 pricey wristwatches on his person.

The group on Tuesday posted a photo of Gen Prawit wearing yet another luxury watch, identified it as a Rolex Cosmograph Daytona IVORY DIAL worth an estimated 1 million baht (US$31,270).

The photo is said to have been taken on Dec 2, 2015 when Gen Prawit met the director of the Thai Red Cross Aids Research Centre and a group of actors and artists at Government House for the launch of a campaign to mark World Aids Day.

Gen Prawit told reporters at Government House that he had borrowed the watches and only wore them occasionally, insisting he is not a collector.

They all belong to his friends and have since been returned, he claimed.

He refused to disclose how many watches he owns and threatened to resign if the NACC concludes he has committed any wrongdoing.

NACC secretary-general Worawit Sukboon said earlier the case was not complicated and the NACC should wrap up its investigation by the end of this month or shortly thereafter.

Gen Prawit has taken flak since pictures started circulating online of him wearing various luxury watches at public functions. None were included in the declared assets he submitted recently to the NACC.

Critics contend this renders the investigation a sham due to the power of such connections in Thai politics.

Pol Gen Watcharapol earlier dismissed worries about this and guaranteed a "clean" investigation would he conducted.

He added that in any case it was beyond his power to influence the decisions made by the other eight NACC members.

At Government House on Tuesday, the deputy prime minister told the media he will continue working. (Video via Twitter/@wassanananuam)

Gen Prawit has vowed not to interfere with the investigation.

Nonetheless, Democrat Party leader Abhisit Vejjajiva has warned Prime Minister Prayut Cha-o-cha that the scandal surrounding his deputy could hurt his credibility or hinder his chances of returning after the next election.

Gen Prayut said that Gen Prawit will explain the matter himself. The NACC is probing the matter and politicians should not exploit the issue to suit their own agendas, he added.

Meanwhile, unforgiving netizens have blasted Gen Prawit for what some have dubbed a "lame" excuse that all the watches belonged to his friends.

"Ridiculously, the deputy prime minister has to borrow watches from his friends to wear. Isn't this too easy for him to say?" posted one.

Calls have been growing that he reveal all the names of his friends who allegedly lent him their wristwatches.

Mana Nimitmongkol, secretary-general of the Anti-Corruption Organisation of Thailand, said he was stunned by Gen Prawit's remarks. 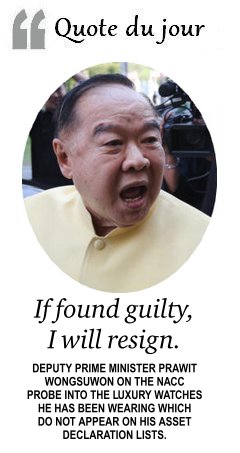 But getting to the heart of the matter rests on the shoulders of the NACC, which must forward the case to prosecutors if doubts remain, he added.

"There are pictures seen by the public that show Gen Prawit wearing over 20 luxury watches, and the case has been submitted to the NACC," he said.

"The NACC must summon witnesses and seek the truth about who lent them to him, where they bought them, how they afforded them and whether they paid their taxes.

"If there is any doubt, the case must be forwarded to the attorney-general and the anti-corruption court," he added.

Mr Mana said if the NACC is seen as prevaricating, members of the public or civic groups may file a complaint against it for dereliction of duty.

"The public has already passed judgement on this case. If you insist on staying on, this will only hurt the image of Gen Prayut and the government," he said.

If the NACC takes Gen Prawit's remarks at face value then it serves no purpose and should be disbanded, he added.

But if it can prove his innocence it will earn the public's respect for acting transparently, he suggested.