An unreleased Nida poll on the watches of Deputy Prime Minister Prawit Wongsuwon has led to the decision of Nida Poll director Arnond Sakworawich to resign. (Photo by Thanarak Khunton)

The director of the National Institute of Development Administration (Nida)'s polling agency has vowed to resign after top administration bowed to political pressure in suspending the release of a poll on Gen Prawit's luxury wristwatches. 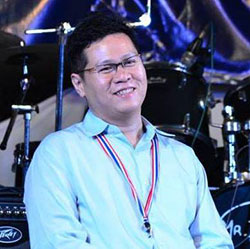 Nida Poll director Arnond Sakworawich on Sunday said on his Facebook page that he would tender his resignation on Monday, Jan 29.

"I will submit the resignation tomorrow (Monday) morning. Academic freedom and honour are most important to me," Mr Arnond wrote.

"I cherish academic freedom and ethical values. Without these, there is no reason for me to stay on as director of Nida Poll, which is duty-bound to honestly and boldly reflect the people's opinions. I will never betray the people and righteousness," he added.

His resignation followed reports that Pradit Wanarat, the president of the National Institute of Development Administration (Nida), put the brakes on releasing the results of the poll, which on Wednesday and Thursday asked people whether they believe that Deputy Prime Minister Prawit Wongsuwon borrowed the watches from friends.

The Nida president told the Thai News Agency that he decided to put on hold the results of the survey as the case of Gen Prawit has been taken up by the National Anti-Corruption Commission. The outcome could mislead the public, he added.

Mr Arnond argued that the poll had been conducted based on statistical principles to reflect the opinions of people on the issue, which was unrelated to the decision of the anti-graft body, accordign to Matichon online.

Government spokesman Lt Gen Sansern Kaewkumnerd said the government did not interfere in the poll, and was not trying to curb academic freedom. The planned resignation of Mr Arnond should not be linked to the government and the watches of the deputy prime minister, he added.

The Nida president said he will discuss the issue with Mr Arnond on Monday.