Chanoknan 'Cartoon' Ruamsap, seen here at home in Bangkok, says she had just 30 minutes to decide, then pack and flee ahead of a junta arrest order. (FB/Moo.Cartoon)

Pro-democracy activist Chanoknan "Cartoon" Ruamsap fled into exile on Sunday, ahead of arrest by military order for sharing on her Facebook account a BBC profile of His Majesty the King.

She is the second person charged with the same offence, out of more than 3,000 Facebook users who also shared the article. The first Jatupat "Pai Dao Din" Boonpattararaksa is imprisoned in Khon Kaen.

Ms Chanoknam told friends on Sunday she had left Thailand after learning she would be prosecuted under Article 112 of the Criminal Code for defaming the monarchy.

Her summons specifically cited her for sharing on Facebook the controversial 2016 BBC article.

Ms Chanoknan on Sunday wrote in a post on the same Facebook account that she received a summons earlier this month to hear the royal insult charge. She posted a photo of the summons. (See below)

"It appears that I had been charged with (Section) 112 for sharing the BBC article in December 2016," Chanoknan wrote.

"I had less than 30 minutes to decide whether to stay or leave. It was a hard decision because this time I wouldn't be able to come back."

Jatupat, who has staged several anti-junta protests, was arrested in 2016 and was sentenced last year by the Khon Kaen military court to two and a half years in prison for sharing the the BBC article on his Facebook account.

Ms Chanoknan has previously joined critics of the regime who say the law has been used to silence opponents. They have gathered support from the United Nations and international rights groups..

Pro-activist website Prachatai said its reporter had talked with Ms Chanoknan on Sunday.

She said her first reaction on receiving the summons was confusion as to why the police had just summoned her, after she had shared the story in December of 2016 -- the time Pai Dao Din was charged.

Prachatai said Ms Chanoknan had fled to an Asian country. She asked Prachatai not to reveal exactly where she is seeking refuge.

She wrote on Facebook that after learning of the regime's summons, "almost everyone told me to leave".

But in the end, it's me who made the decision. The time I spent to decide was so short and quick. I had less than 30 minutes to decide whether to stay or to leave. What is difficult is the fact that I won't return after this journey.
Then I went to say goodbye to dad and mom. Everyone was shocked but agreed. No one wanted me to be in jail for five years merely because sharing a BBC news story.
On the first day I arrived here, I only cried because I saw no way out. Everything seems puzzling and confusing. I didn't know how to deal with them. I kept asking myself a question whether I made the right decision to seek refuge or I should go back, and I can meet family and friends as usual after serving the jail term. But I got the answer that I couldn't backtrack now.

Below: The copy of the summons which sent Ms Chanoknan fleeing, as posted on her Facebook account on Sunday. 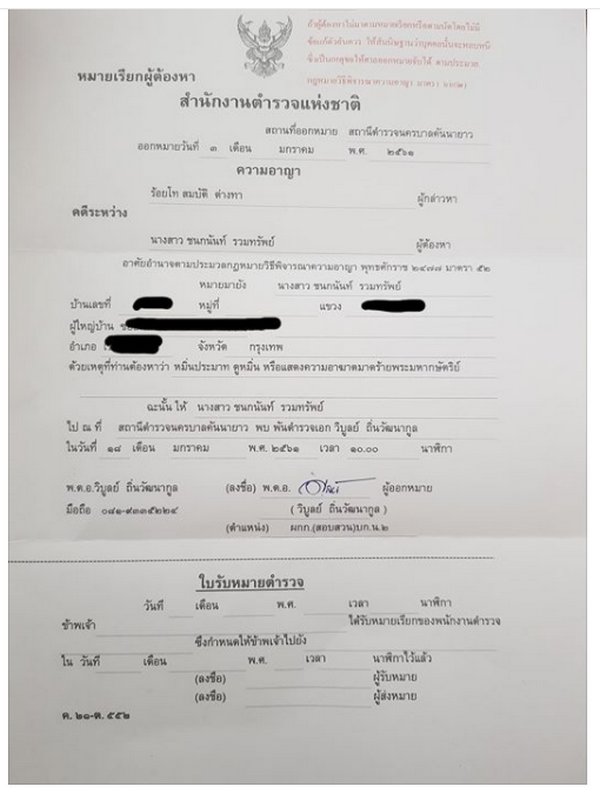