Applications worth B300 billion made in 2017

The Eastern Economic Corridor is the most important economic cornerstone in government attempts to attract investment in the country. (Bangkok Post file photo)

The government is more positive about investment prospects in its much-touted Eastern Economic Corridor (EEC), predicting more than 200 billion baht to be recorded this year.

Speaking Monday at a seminar on the EEC, Deputy Prime Minister Somkid Jatusripitak said he is confident the investment value in the flagship EEC this year will well outstrip the earlier forecast of 200 billion baht.

A total of 640 investment applications were forwarded to the Board of Investment (BoI) for approval last year, up 7% from the year before.

Of the total, 300 billion baht was intended for investment in the EEC, lured by the government's 10 targeted S-curve industries, and outpacing the target of 200 billion.

The government expects applications submitted to the BoI to grow by 12% to 720 billion baht in 2018, thanks to infrastructure investment and a better international relationship with the US and the EU.

Gen Prayut Chan-o-cha said on Jan 26 the government planned to invest a total of 1 trillion baht in EEC infrastructure, with government spending accounting for 30%, public-private partnerships (59%), state-owned enterprises (10%) and the Royal Thai Army (1%).

The development will have three phases.

The urgent phase, between 2017-2018, aims to lure both domestic and foreign investment in the EEC; the second phase between 2019-2021, focuses on transport development; and the third phase, from 2022 onwards, aims to create sustainable development and bolster the infrastructure network to link neighbouring countries.

Gen Prayut said the first focus of the investment will be technology and human resource development. 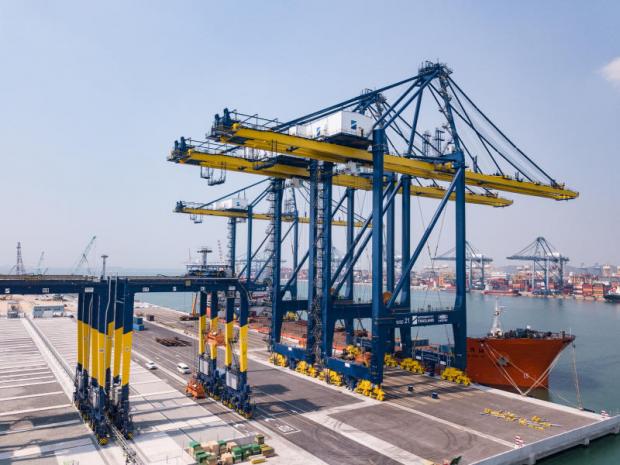 Three super post-panamax quay cranes at Laem Chabang port. They are an integral part of the Terminal D and EEC development.

Kanit Sangsubhan, secretary-general of EEC Office, said the investment value in the EEC is expected to reach up to 250 billion baht in 2018.

"The government strongly believes that the EEC scheme will attract both local and foreign investors to invest in the EEC, which is designated to become the new main investment project in Asean," said Mr Kanit.

He said the EEC law, once enforced, will help build up investor confidence.

The draft EEC law is pending the deliberation of the Council of State and is expected to be read at the National Legislative Assembly next month.

At Monday's cabinet meeting, Industry Minister Uttama Savanayana said the ministry is scheduled to forward a proposal aiming to reduce the costs for more than 50,000 small and medium-sized enterprises (SMEs) by 10% over the next three years.

The government hopes the 800-million-baht initiative will create at least 10,000 SMEs this year and 20,000 in the second year.

The initiative will help SMEs manage production costs, one of the main components of companies' operating costs.

The government accelerated the launch of its first 78-billion-baht SME soft-loan package to 2018. Plans call for issuing soft loan funds in the first quarter of the year, to be divided among three programmes.

The local economy loan programme will receive 50 billion baht, the transformation loan initiative (to update machinery) will get 20 billion, and the micro-SME programme will get 8 billion.