A member of the Nitirat group has said he and his auto-parts tycoon friend would set up a political party as an alternative to voters in the upcoming election.

Piyabutr Saengkanokkul, an academic in his late thirties at Thammasat University’s Faculty of Law, said he would join hands with Thanathorn Juangroongruangkit, 39, executive vice-president of Thai Summit Group, a major auto-parts manufacturer and exporter.

Asst Prof Piyabutr told BBC Thai in an exclusive interview on Friday that now was the right time.

“I've always had the idea of forming an alternative political party but it became much clearer when I took a sabbatical leave in France two years ago when Europe was mired in political and economic crises. Several alternative parties were born and have since gained popularity,” he said.

He cited Podemos of Spain, which came in third, Syriza of Greece, which formed a government, and La France Insoumise, which now leads the opposition.

“People felt they had no choice. Whether it was the right or left wing, they follow the same liberal economic policy.”

For Thailand, after 13 years of political conflicts, many people see no hope.

“Thailand has been weakened by decade-long conflicts. If one [major] party wins, the other opposes it. The cycle goes on until people feel elections are not the answer. That’s why some of them condone a coup.

“Now the time has come after a lost decade to remind people a return to elections doesn’t mean same old politics,” he said.

Asst Prof Piyabutr declined to reveal the name of his new party but said it would reflect this ideology, new citizens and new politics. “There will be no such words as "nation", "Thai" or "democracy" [in the name]”, he told BBC Thai.

But neither Asst Prof Piyabutr nor Mr Thanathorn came to the political scene without baggage.

Nitirat, a group of Thammasat academics, was active in 2010-13 after the 2006 coup. It proposed a number ideas many Thais found too radical such as the eradication of the legacy of a coup and an amendment to the lese majeste law. The latter earned the group’s leader, Prof Worachet Pakeerut, several punches in the face by a twin who found the idea unthinkable.

Asked whether the fact that he was a Nitirat member would affect his political debut, Asst Prof Piyabutr said: “I don’t think I can change it. This is me, saying what I believe in. We proposed them with sincerity. We have no revenge against anyone. We’d like to see all key institutions exist in line with democratic principles and with honour.”

Mr Thanathorn himself also earned the nickname “billionaire prai” as he was seen attending some red-shirt protests after the 2006 coup. Besides, as a nephew of Suriya Jungrungreangkij, a transport minister in the Thaksin Shinawatra government, there is every chance their new party would be viewed as another red-shirt group or a Pheu Thai nominee.

However, Mr Thanathorn, a former chairman of the Student Federation of Thailand in 2000, dismissed such speculation.

Despite the undemocratic elements of the 2017 constitution and the junta’s three-year attempts to sideline politicians, Mr Thanathorn disagreed with others who said there was no opportunity for newcomers.

“I think there’s an opportunity. More to the point, it’s not an opportunity, it’s a mission,” he said in a Feb 13 interview with BBC Thai.

“I think it needs to be done. We can’t just stand by and watch Thai society collapse,” he said. 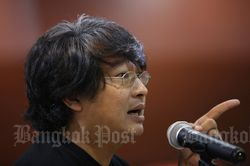 “We’ve decided to increase the number of co-founders to 150 from 15," says Sombat Boonngam-anong, founder of the Grin party.

Apart from the pair, Sombat Boonngam-anong, a moderate red-shirt known for his mockery and peaceful symbolic protests against coups, announced on Friday he would set up the Grin party and claimed the idea had drawn a lot of interest.

“We’ve decided to increase the number of co-founders to 150 from 15. Grin would focus on participation by the members and have different ways of showing its stand,” he told Khaosod Online.

“I’ve created a Facebook for the party and we’ll start drafting our policy. We’ll mainly use social media to reach out to people and as our main contact channel because it’s the cheapest and most effective way,” Mr Sombat said.

He planned to register his party with the Election Commission by the end of this month and would ask the National Council for Peace and Order (NCPO) for permission to hold meetings.

“I believe the NCPO would allow all parties, including Grin, to hold meetings,” he said.