Black leopard graffiti was removed from a wall in Soi Sukhumvit 58 in Bangkok. (Photo from @headachestencil Facebook account)

Graffiti featuring a black leopard - apparently to send a message on the poaching case involving a construction tycoon - has swiftly been erased.

The artist who painted the picture on Bangkok's Sukhumvit Soi 58 said on his Facebook account, Headache Stencil, that the image had been removed from the wall on Saturday.

"Sorry for those wanting to take pictures with the blank leopard graffiti. Officials have already removed it," he wrote.

The exact the graffiti appeared on the wall was unclear, but the artist posted the image on social media on Friday, drawing many people to take photos with it.

It was painted on the wall of a deserted plot of land in the soi off Sukhumvit Road.

The graffiti of the feline with a "silent mode" icon beside it follows messages on the artist's Facebook page airing frustration over the handling of the death of the big cat in the Thungyai Naresuan Wildlife Sanctuary in Thong Pha Phum district in Kanchanaburi.

The artist, whose name iwas not disclosed, is already used to his graffiti being removed. Another one, featuring the image of Deputy Prime Minister Prawit Wongsuwon on a watch, has also been scrubbed from view.

He has painted a number of graffiti messages opposing the regime and coup. 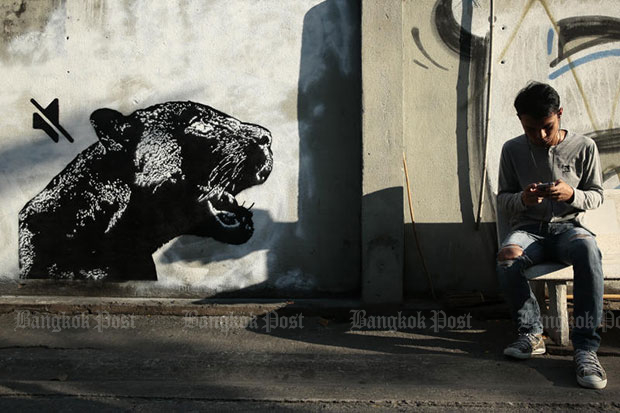 A man sits near black leopard graffiti on Sukhumvit Soi 58 on Sunday. (Photo by Patipat Janthong)